Here are the key points you need to know from Budget 2017:

12.30pm: Noonan is due to rise to his feet in 30 minutes to begin his budget speech, although as is customary all of the headline announcements have already been comprehensively leaked.

1.15pm: Noonan says the government will announce tax cuts worth €500 million, with the burden on taxpayers to be reduced by nearly €300 million.

To counteract that there will be revenue increases of €195 million also included in the budget. The so-called ‘fiscal space’ now stands at €1.3 billion, up from the circa-€1 billion figure being bandied about earlier this year.

Noonan added that the government will set out a new debt-to-GDP target of 45% to be reached by the mid-2020s, adding that “we must get away forever from the boom and bust cycles” of recent decades. 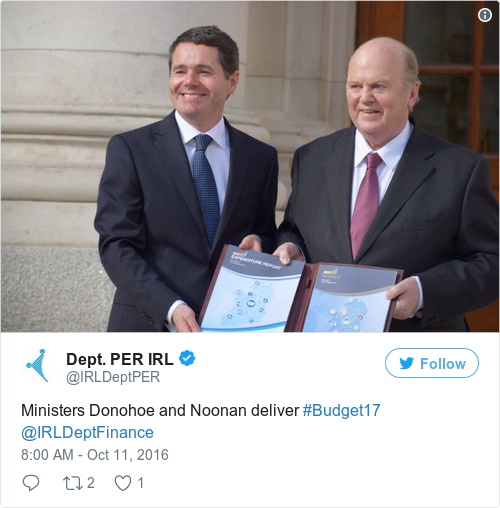 1.25pm: The predicted help-to-buy scheme for first-home buyers has been unveiled, with a tax rebate to be introduced on new homes worth up to €600,000.

The rebate will be valued at €20,000 – and is likely to be welcomed by developers as an extra incentive to build fresh properties.

However critics expect the measure will simply push up the cost of new homes, effectively adding the same amount to the price for anyone looking to buy.

The kick-in point for the 2.5% band will also be lifted slightly, offering a slight extra benefit to low- and middle-income earners.

Another measure being requested by the business community, a better share incentive scheme for employees, will also be introduced… but not until Budget 2018.

Noonan says the move will need to be cleared by the European Commission, which the government will consult ahead of the change.

As expected, the three lower USC rates will drop by half a percentage point #Budget2017

1.40pm: A tax on sugar-sweetened drinks will be introduced in Ireland, however not until April 2018.

Noonan says the “highly integrated” production networks between Ireland and the UK means it will be “prudent” to align the two countries’ schemes.

He also takes pleasure in announcing a tax increase of 50c on a pack of 20 cigarettes will be the only tax increase in the budget for 2017.

That means no pain on diesel excise, or other fuel costs, a welcome development for transport-intensive industries.

For landlords, the maximum deduction allowed on mortgage interest will rise from 75% to 80%.

The ceiling for the rent-a-room scheme will also be lifted €2,000 to €14,000 per year, an incentive for people to rent out their spare rooms in an increasingly squeezed housing market.

For the self-employed, the earned income tax credit will be lifted €400 to €950 – still well below the €1,650 automatic deduction available to PAYE workers.

1.55pm: Donohoe is taking his turn now, pledging €1.2 billion for the Department of Housing in the budget.

That includes €50 million towards the ‘local infrastructure activation fund‘, which it is claimed has the potential to deliver 20,000 extra private homes by 2019.

Overall expenditure in his department will be up €1.9 billion on last year’s figures, with €4.5 billion going towards capital spending. 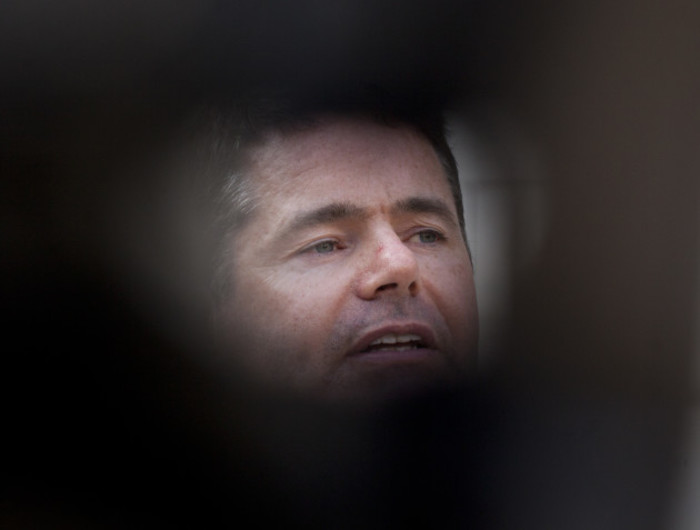 2.10pm: The government is going big on childcare, announcing universal subsidies for all children between six months and three years of age who are in childcare.

The move has been welcomed by the National Womens Council of Ireland, which said it was “very important” that the childcare package was universal. Better childcare is seen as an essential component in getting more parents back into the workforce.

There will also be means-tested subsidies for a broader age range, covering children from six months up to 15 years of age.

Onto one of the big ones: childcare. Universal subsidies for children aged 6mths to 3years #Budget2017

2.20pm: Donohoe confirms plans to establish a Public Service Pay Commission, as flagged in the programme for government, an attempt to deal with the ever-growing minefield in the area as existing agreements expire.

The commission will report to him by mid-next year, the minister adds, although €290 million has already been put aside for “partial pay restoration”.

There will also be a budget boost for the state development agencies, the IDA and Enterprise Ireland, “primarily for staff resources”. 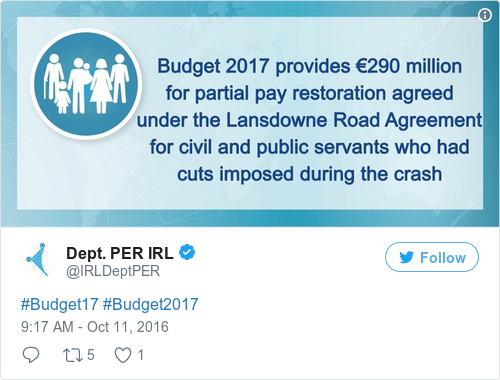 2.35pm: Reactions to the budget announcements have been steadily flowing in, with the tourism sector suitably relieved that their VAT rate will remain intact… for now.

You can read the full reaction from tourism representatives on Fora.

Likewise, the drinks industry didn’t suffer any increases in excise duty – although it didn’t get a look in on a reduction to what they claimed are already punitive rates.

The National Off-Licence Association had a pointed reminder that consumers in Ireland still paid the highest excise rates in the EU on wine, for example.

On the sugar tax, the Irish Beverage Council claimed the measure would have no public health benefit while punishing both consumers and the industry.

The council’s director, Kevin McPartlan, said the finance minister “continues to labour under the delusion” that higher soft drink taxes would prevent obesity.

3.00pm: Unsurprisingly, SME and startup campaigners are disappointed in this year’s budget effort – which again failed to deliver much in tangible assistance for the sectors.

“The budget has failed to deliver for small businesses.” 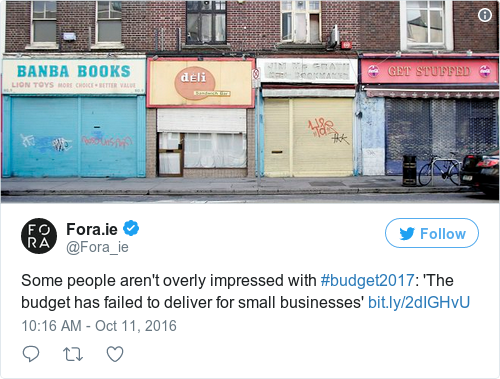 Some people aren't overly impressed with #budget2017: 'The budget has failed to deliver for small businesses' https://t.co/pPs4uGrRRi pic.twitter.com/j3IYuKk3df

The capital gains tax regime for those selling their businesses remains unattractive compared to that in the UK, while a better employee share scheme is at least a year – and likely longer – away.

Meanwhile, this was the verdict from Niamh Bushnell, Dublin’s startup commissioner:

3.45pm: While the government’s ‘single affordable childcare scheme‘ has been hailed as a positive move for keeping women in the workforce, not everyone is convinced about the plan.

Trade union Unite says that without an increase in childcare places, providing extra subsidies for parents will simply drive up costs. 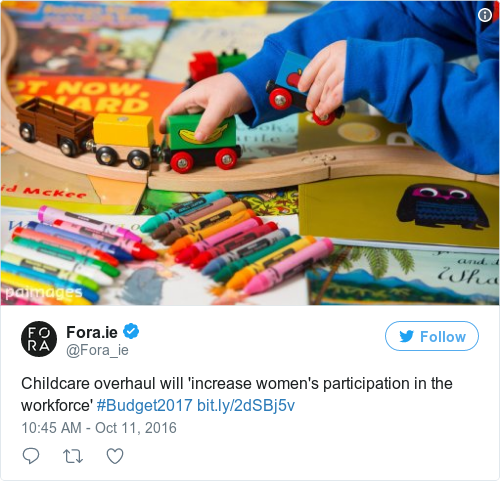 4.20pm: The €20,000 first-time buyer scheme has come in for criticism, with several pundits claiming it will really prove to be a back- door subsidy for builders.

As detailed elsewhere on Fora, Savills Ireland director of research John McCartney expects the tax break for buyers to simply push up prices on new properties – a move which will also “help restore developer profits”.

However the Construction Industry Federation says the scheme will help address the “chronic lack of supply in new builds”.

5.15pm: It got little attention in either minister’s budget speech, but the minimum wage is also going up by the predicted 10c per hour.

That’s the same amount recommended by the Low Pay Commission earlier this year, taking the hourly rate to €9.25.

So in the case of one of the Department of Finance’s case studies, ‘Seamus’, a full-time minimum wage earner, he will be in line for an extra €203 per year.

Business groups such as Retail Ireland have expressed disappointment at the move, with the Ibec-affiliated body saying it moved minimum pay rates in the Republic further out of step with those in Northern Ireland.

However many others claimed the move didn’t go far enough for those on low incomes.

€5 a week welfare payments increase is welcome (even if its really €4) however minimum wage workers are to get 10c an hour. #Budget2017

5.55pm: Our sister site, TheJournal.ie, has a handy guide to the main winners and losers from this year’s budget. You can read the full story here, but these are a couple of highlights: 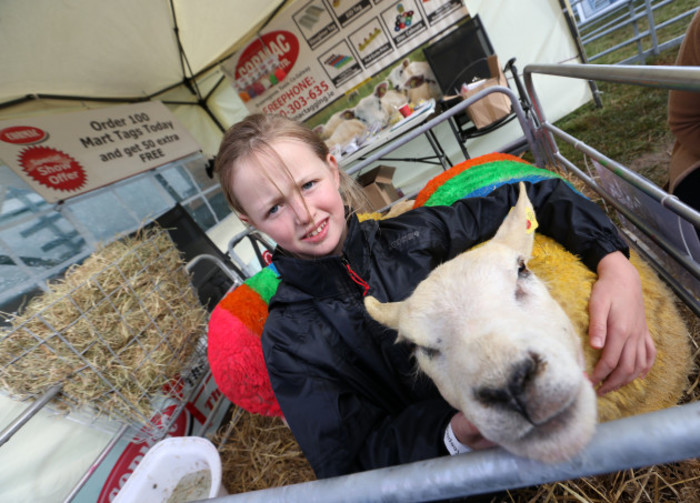 6.40pm: Ireland’s vital agribusiness sector will benefit from a range of measures, including a €150 million low-cost loan fund.

Irish Farmers Association president Joe Healy welcomed the funding, which will be offered at interest rates of less than 3% per year, after what had been “a very difficult year for farm families”.

He also praised the restoration of funds previously cut from the Farm Assist Scheme, and a ‘step out’ option on income averaging for tax purposes.