THE BUDGET “FAILED to deliver for small businesses” with no major movement on key measures such as capital gains tax and share-based pay schemes.

Finance Minister Michael Noonan announced today that the government will reduce the 20% rate of capital gains tax to 10% on disposals of qualifying assets up to a limit of €1 million.

This means that if someone is selling a business for €20 million, they will only pay 10% on the first €1 million, while the standard 33% rate will apply thereafter.

The news is likely to come as a disappointment to many startup and small business campaigners, who were pushing for the relief to apply to the first €10 million of an asset sold.

It was also hoped that there would be new incentives announced for share-based remuneration programmes, through which companies could reward their employees by awarding them part of a business in a tax-efficient manner.

Although the minister said that a scheme will be developed, it will not be introduced until Budget 2018.

“Such an incentive will require the approval of the European Commission and my officials will commence engagement with the commission to ensure that the incentive will comply with state aid rules in advance of the next budget,” he said.

Speaking to Fora, Small Firms Association director Patricia Callan said that the budget was a disappointing one for small businesses.

She said that the government should have looked to match the CGT rates on offer in the UK, where entrepreneurs only pay a 10% rate on the disposal of assets up to a lifetime cap of £10 million.

“I don’t think that the budget reflects the challenges we face in the context of Brexit and what is happening in the UK. My overall assessment would be that it failed to deliver for small businesses,” she said.

“CGT should be equivalent to the UK, what has been done is welcome but it isn’t far enough.” 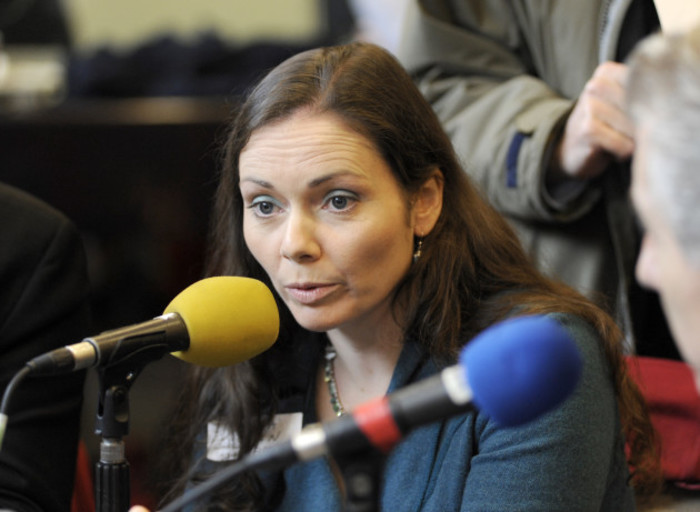 Callan added: “The programme for government talked about new startups, but what is really needed is a capital injection so that businesses can sell, get new investment and grow.

“We have had people who have held onto their businesses for too long as a result of the high capital gains tax.”

Dublin startup commissioner Niamh Bushnell said the tax measure was “telling Irish companies to stay small and sell early, which is not helpful or desirable from an economic perspective”.

“Hopefully, the department will continue to view the relief as a ‘work in progress’ and will make bolder moves in the near future to encourage entrepreneurs with the ambition to scale companies in Ireland, to move companies to Ireland and to go global from Ireland,” she said. 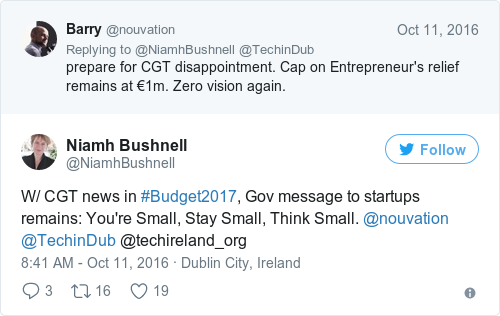 On the government’s planned share-based remuneration scheme, Callan said the lack of detail in the budget was “odd”.

“These rules always have to go through state-aid checks, but it has never stopped them from releasing details before,” she said.

Bushnell urged policymakers to finalise the scheme as soon as possible as “2018 feels like decades away to a startup which is actively looking to attract great talent today”.