PLANS FOR A new hotel in the heart of Dublin 4 have hit a roadblock following appeals against the development by a Tidy Towns group and local residents.

A restaurant and bar with terrace dining and meeting rooms were included in the plans. A taxi drop-off area would also be built on Donnybrook Road.

The firm that lodged the plans is owned by Emmet O’Neill, the former head of fuel giant Topaz while it was owned by his uncle, businessman Denis O’Brien.

The project was given the all-clear by the council despite Donnybrook Tidy Towns, and over a dozen residents, noting their concerns about how the new hotel will affect traffic congestion in the village.

The voluntary group has now escalated its grievances to An Bord Pleanála in a bid to get the council’s ruling overturned.

In its appeal, Donnybrook Tidy Town’s chairperson cited the hotel’s planning application, which noted that the number of people expected to visit the site on any given day is estimated at roughly 680 – this figure is not inclusive of staff or delivery workers.

The group added that there are no provisions in Kouchin Holding’s proposal that outlined how the influx of vehicles, such as rented cars and taxis, would be facilitated.

“Given that the location of the proposal is on a pinch point on one of the busiest roads and a major artery of the N11 into and out of the city, this would undoubtedly lend itself to untold pressure on immediate adjoining traffic,” it claimed.

“The village is not designed for, nor capable of, taking this extra traffic flow and the consequences would be far-reaching for the entire city,” the group told An Bord Pleanála. O’Neill’s firm outlined that it didn’t expect the new development to cause traffic issues.

It added that guests would most likely not be checking in or out of the hotel at times of peak traffic congestion on the N11 road.

The Tidy Towns group also complained that the new building would be an “overbearing structure towering over” Donnybrook, which is predominantly a low-rise area.

“We believe that the submission for the proposed development is flawed, ill-thought out, lacking in sensitivities to the village archeological, historic and cultural heritage, damaging the urban fabric of the village,” it told the national planning board.

The Tidy Towns group added that it has worked hard to enhance Donnybrook and claimed the new building would reverse its “achievements promoting the historic and heritage environment” of the village.

Works on the proposed hotel are now delayed until a ruling is posted by An Bord Pleanála. 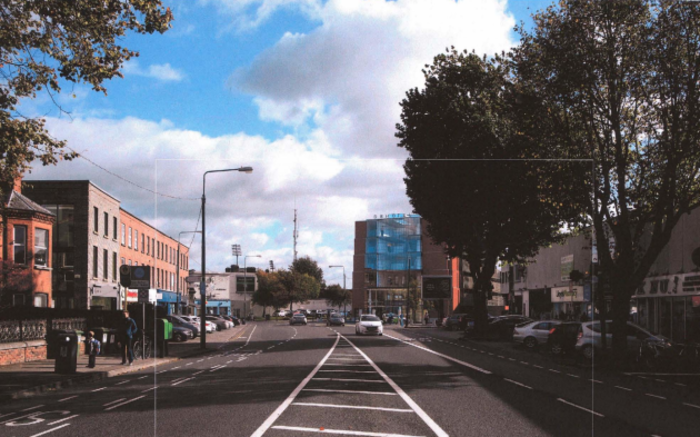 A view of the hotel from Donnybrook village
Source: Dublin City Council

Three years ago, O’Neill sold his shares in Mount Juliet and Mount Wolseley resorts. The Donnybrook project represents a move back into the hotel game for the founder of the Smiles dental chain and majority owner of the publisher behind website Lovin Dublin.

The plans for a new Donnybrook hotel have come at a time when the Dublin hotel sector is booming and room rates have skyrocketed.

There are currently 5,000 new hotel bedrooms in the pipeline for the Irish capital, with new entrants, like EasyHotel, Premier Inn and Motel One, scrambling to enter the market to get a piece of the action.