Here are the key points you need to know from Budget 2018:

1.10pm: Donohoe is on his feet and, after setting out his stall with “three economic pillars” for Ireland, he has also detailed Ireland’s GDP growth forecasts – a bullish 4.3% this year, followed by 3.5% next year.

He confirms that he will set up a rainy day fund with €1.5 billion transferred from the Ireland Strategic Investment Fund (ISIF) “to start it off”, with an annual contribution of €500 million each year from 2019. 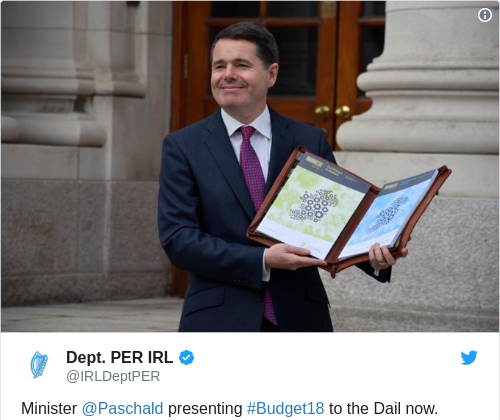 1.15pm: Ireland’s infrastructure deficit – one of the biggest issues facing the country post-recession – will also be targeted, with capital expenditure to go from €3.7 billion in 2015 to €7.8 billion in 2021.

While those figures sound impressive, it’s likely a lot of the spending will be put on the long finger as Donohoe says the Budget 2018 ‘package’ will be only be worth €1.2 billion. That includes additional revenues of €830 million.

1.20pm: On housing, Donohoe says more than €1.8 billion will be allocated from the Budget, with 3,800 new social houses to be built next year.

As had been flagged, some €750 million will be made available from the ISIF to fund commercial investment in housing via a new vehicle, Home Building Finance Ireland, which will provide cheap finance for projects and involve input from bad bank Nama.

Stamp duty on commercial property, another move identified ahead of the Budget, will be hiked from 2% to 6% from midnight tonight – one of the big, revenue-raising measures in this year’s fiscal plan.

In a couple of measures targeting property investors and attempting to kick-start more building projects, an increased vacant site levy will come in, rising from 3% for 2018 to 7% in 2019 – or a combined 10% for the tow years.

The seven-year capital gains tax holiday for those holding development land will be sliced to four years to encourage would-be land hoarders to sell.

Mortgage interest relief will gradually be reduced – remaining at 75% next year, before being cut to 50% and then 25% in the following years.

1.30pm: A couple of expected tax hikes have been announced – an increase in cigarette prices, by a hefty 50c per pack, and the previously flagged sugar tax.

On the latter, Donohoe has fixed the rate at 30c of tax per litre of sugar-sweetened drinks for all products with 8g or more of sugar per 100ml. A reduced, 20c rate will apply for drinks with between 5g and 8g of sugar.

In an unexpected move, the finance minister has also announced an increase in the ‘tan tax’ – hiking the VAT on sunbeds from 13.5% to 23%.

1.40pm: To help SMEs cope with the fallout of Brexit, Donohoe has produced a ‘Brexit loan scheme‘ offering €300 million in finance, at competitive rates, to help firms deal with the trade changes.

This fund will include support for the food sector, which is expected to be hardest hit with the weaker pound and potential border controls.

The tourism and hospitality sector can breath a sigh of relief, with the industry’s preferential 9% VAT kept in place for another year, despite rumblings from the Department of Finance that the lower rate had done its job. 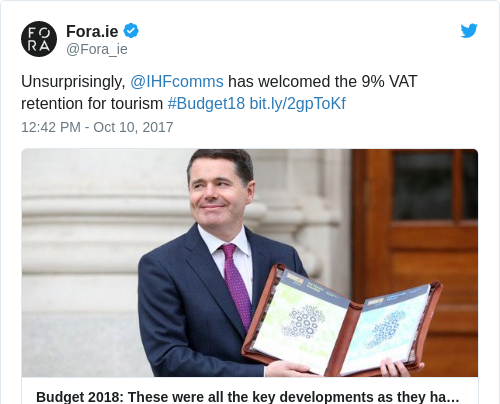 1.45pm: In a measure that’s likely to be welcomed by the renewable energy industry, those who lease farmland for solar panels will relief on both capital gains tax and inheritance tax.

There will also be a 0% benefit in kind (BIK) rate on electric vehicles in 2018 – which will apply for one year to begin with.

1.55pm: When it comes to income taxes, Donohoe has under-delivered on one of the pre-Budget expectations.

He announced that the entry point for the top rate of income tax will be lifted by €750 to €34,550 – less than the €1,000 increase floated in the media before the speech. There will also be a €200 increase in the earned income credit.

The unpopular USC has received some further, minor adjustments, with the lower 2.5% band dropping to 2% and the 5% rate being shaved down to 4.75%. You can check out what those changes mean for your income with this Budget 2018 calculator.

The self-employed also get a little tax cut, although they will still pay more than their PAYE counterparts with the same earnings. The contingent’s earned income credit will be lifted €200 to €1,150 next year.

2.00pm: In a move that will go down well with the startup and SME community, Donohoe says the government will launch a new Key Employee Engagement Programme, which gets the catchy acronym KEEP.

The scheme is aimed at helping firms target key workers with share options, with capital gains taxes to be paid on share disposal – rather than the current scheme of charging them income tax when they exercise an option.

On corporation tax, the government will – wait for it – keep Ireland’s 12.5% headline rate in place for another year. Wow, we didn’t see that one coming.

However there will be a change to capital allowances for intangible assets, or intellectual property, with deductions limited to 80% of relevant income for any accounting period.

Finance officials expect this to be one of the major new sources of revenue, with an extra €150 million forecast to flow into the state’s coffers.