THERE’S BAD NEWS for fizzy drink fans as the government confirmed today that a sugar tax is on the way.

Minister for Finance Paschal Donohoe said there will be a tax of 30c per litre on drinks with over 8g of sugar per 100ml.

There will be a reduced rate of 20c per litre on drinks with between 5g and 8g of sugar per 100ml.

The minister said the levels are consistent with rates that are being introduced in the UK and will commence in April 2018 subject to state aid approval.

Commenting on the announcement, Pepsi and Club Orange producer Britvic said it was disappointed that the soft drinks sector has been “arbitrarily singled out” by the introduction of the sugar tax.

Britvic Ireland managing director Kevin Donnelly said the Department of Finance and Revenue needs to engage with the industry to make sure Irish manufacturers, retailers, wholesalers, publicans and food service operators are not “disadvantaged” by the policy change.

“We look forward to constructive engagement as soon as implementation details become clearer, most likely in the upcoming finance bill,” he said.

“Given the implementation timeline is less than half that afforded to the industry in the UK, early engagement on this matter is crucial.”

RGDATA, an association representing 4,000 family-owned shops, said it is important to monitor the effects of the new policy to ensure it does contribute positively to public health “rather than just being another charge on consumers”. 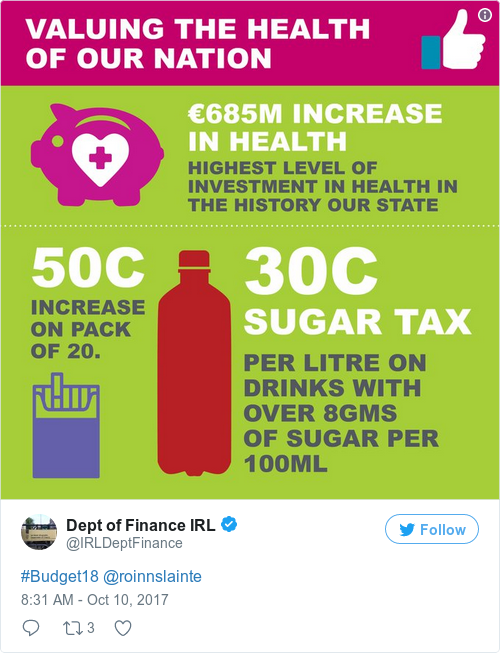 On the opposite side of the argument, health groups such as Dental Care Ireland and Irish Heart welcomed the government’s commitment to the sugar tax.

Irish Heart head of advocacy Chris Macey said this is a “landmark day in the fight against obesity” and that this is “the single most important action Government can take to tackle Ireland’s obesity crisis”.

This new policy around taxation of sugar-sweetened drinks was flagged well in advance of Donohoe’s announcement today.

In last year’s budget, then finance minister Michael Noonan said that the sugar tax would be introduced in the first half of 2018 to coincide with similar plans in the UK.

This tax is one of a number of revenue-raising measures in Budget 2018 aimed at improving health in Ireland. There will also be an increase in excise duty on cigarettes and an increased VAT rate on sunbed services.

These measures will contribute to the €685 million increase in health spending for 2018, however, the sugar tax is not expected to add as much to the public purse as previously thought.

Three years ago, a tax paper published by the Department of Finance calculated that a 10 cent tax on a 330ml soft drink would rake in about €134 million every year.

That figure was revised down to just €40 million this year ahead of the sugar tax announcement for this year’s budget.

Donohoe’s department has suggested that the 70% slash to the original figure was due to the number of sweet drinks manufacturers that have already reduced the amount of sugar in their products in anticipation of the new tax.

Across the world, a number of countries, such as the US and France, have moved to tackle obesity with the introduction of extra levies on sugar-sweetened drinks.

Previous analysis by Fora looked at what a sugar tax in Ireland might look like, based on how it has gone down in other countries.