RYANAIR IS CONFIDENT a lethal cocktail of ever-decreasing airfares and excess capacity will soon thin traffic in Europe’s skies. But the airline’s weaker rivals are tipped to keep clinging on for dear life – until at least the summer.

Having slashed expectations by 12% in October, it now anticipates it will deliver an after-tax profit of between €1 billion and €1.1 billion for the year to the end of March. That figure was previously estimated to be in the €1.1-€1.2 billion ballpark.

The profit warning was largely blamed on overcapacity and lower-than-expected winter fares, which are tipped to decrease by 7% – against a previous forecast of 2%.

The airline said it couldn’t rule out further cuts to both airfares and its guidance for the current financial year. Its share price has plunged over the past 12 months as it battles staffing and other problems.

In a statement accompanying the update, Ryanair CEO Michael O’Leary said he anticipates decreasing airfares “will continue to shake out more loss-making competitors, with Wow, Flybe, and reportedly Germania, for example, all currently for sale”. 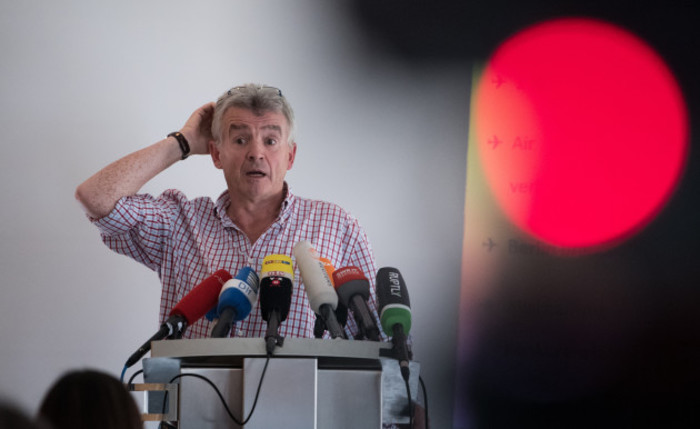 However, analysts at Cantor Fitzgerald have suggested a sudden crash in oil prices last year may have thrown Ryanair’s unprofitable rivals a lifeline – albeit a short-term one.

“With a lower oil environment, smaller, less profitable airlines with poorer balance sheets have been able to survive the difficult winter period, maintaining excess capacity in the market, creating downward pressure on fares,” they wrote in a briefing note.

An autumn peak in oil prices coincided with the collapse of several small carriers – like VLM, Cobalt and Primera Air – over a short space of time.

“Our expectation was for this to accelerate into the winter, when airlines traditionally fail, however the sudden drop in oil prices bought a number of unprofitable, unhedged airlines more time, ensuring they were able to carry capacity into the spring/summer,” Cantor Fitzgerald wrote.

Ryanair’s profit warning came a month after low-cost rival Norwegian Air announced plans to cut routes and bases and said it was struggling to fill seats after expanding aggressively.

Michael O’Leary has long claimed that Norwegian is due to go bust, but an aviation source with knowledge of the Scandi carrier, who asked not to be named for commercial reasons, told Fora they believe it has enough money in the reserve to keep flying.

“The immediate bankruptcy of an airline as big and as well-seasoned as Norwegian is not yet written in stone,” they said.

Industry commentators say that more airlines will have to go bust to consolidate Europe’s airspace – which is still highly fragmented - and ease the pressure on airfares and excess capacity.

When that moment comes, it will be good news for Ryanair and its market share.

“Obviously it removes weaker airlines that are just pricing to get revenue through the door. Greater consolidation into fewer hands is positive in terms of Ryanair.”