DEVELOPER JOHNNY RONAN has the all-clear to construct one of Dublin city centre’s biggest apartment developments.

The high-profile property developer already had permission to build 165 apartments on the 1.26-hectare site in Dublin’s docklands but sought to revise these plans to get the approval to construct more housing units.

In an application to the council earlier this year, Spencer Place Development Company Limited applied to increase the size of the residential scheme to 325 apartments and also build a 102-unit aparthotel on the site.

It is located within a strategic development area which has allowed property developer Ronan to fast-track the planning decision.

After reviewing the additional details, the local authority has granted planning permission for the project. 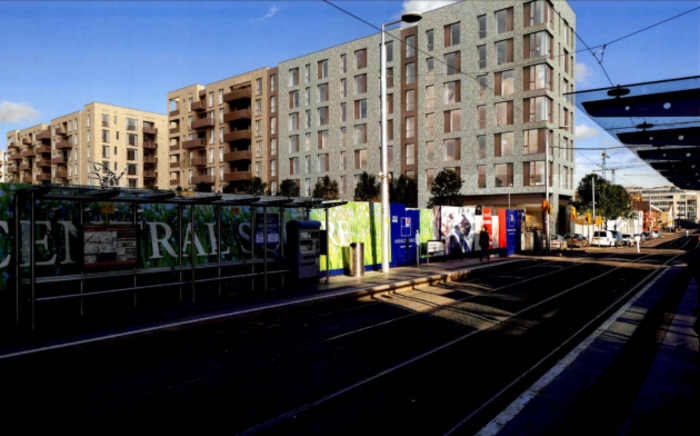 An artist's interpretation of the proposed development
Source: DCC

Local residents in the north docklands area lodged several objections to the development with Dublin council.

The numerous complaints claimed the new apartment and aparthotel blocks would not enhance the area and that the buildings proposed are “lego-like” and “bland” in appearance.

Another complainant noted that the residents are tired of constant construction works taking place near their neighbourhood.

“No other community in Ireland and probably Europe has had to endure 20 years of continuous development with at least another five years to come.”

However, the council said the project would make a positive contribution to the housing stock of the area and the new aparthotel would help Dublin meet growing demand in the capital.

The local authority’s decision can still be appealed to An Bord Pleanála by objectors.

There has been a spike in development in the docklands area of Dublin in recent years. A number of new office blocks are currently in development, while the Central Bank’s new headquarters has opened in the pocket of Dublin.

Several sites in the area primed for development have also been placed on the market in recent months.

The new apartment blocks at Spencer Place are one of a number of development projects Ronan has in the works in the docklands.

The developer also has approval to build new offices, two hotels and restaurants in the southern part of the Spencer Place site. The developments in the scheme range up to eight storeys in height.

However, Ronan has failed in a number of attempts to get the go ahead for a 22-storey building nearby. If approved, it would have been the capital’s tallest building.

A view of the proposed development
Source: DCC

Overall, the entirety of the Spencer Place development will be more than 90,000 sq m in size.

The apartments in Spencer Place will be a mix of one- and two-bedroom units and spread across two blocks. The proposed 102-unit aparthotel will be located to the western portion of the site and contain 216 bed spaces.

As part of the development, a new communal courtyard will also be created, while a cafe will be opened in the block due to contain the aparthotel.