THE LAST REMAINING development site on the waterfront at Dublin’s docklands has gone on sale for €120 million.

The site up for sale, dubbed Project Waterfront, is located within the Strategic Development Zone of the docklands and adjacent to the 3 Arena.

The 4.6 acre plot is divided into two sections, one of which is zoned for residential use and the other intended for use as a commercial site. The adjoining sites could be sold separately or as one combined lot.

The commercial site on the market has planning for four separate office buildings, which range from six- to eight-storeys. Overall, the office development would span nearly 28,000 sq m.

There is also pre-existing planning permission at the residential site for two buildings that would range from six- to 11-storeys in height.

The two structures combined could contain up to 420 apartments, a crèche, a café and restaurant. There is also approval for the construction of a retail element.

Joint agents for the site, Savills and Cushman & Wakefield, said new feasibility studies carried out have suggested that the recent revision of the apartment guidelines could lead to an even larger residential development on the plot.

They said the successful bidder for the site could build between 494 and 526 units based on the new guidelines.

“The finished residential scheme will be well positioned to benefit from the huge weight of equity seeking PRS (private rented sector) stock at aggressive yields in Dublin,” the agents noted.

Planning permission for the office development was acquired in 2017 and has a 10-year lifespan, however developers would be required to move on the existing residential planning approved by the end of 2022. 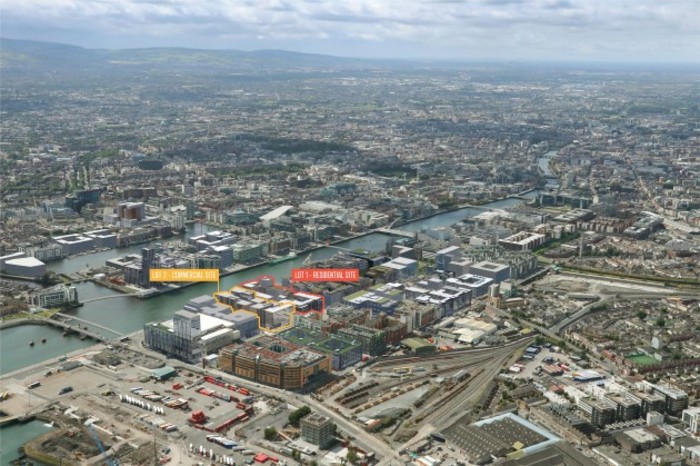 Development activity in the docklands area of the Irish capital has picked up in recent years, with a number of large office and residential blocks under construction.

Dublin’s tallest office block, the 17-storey Exo project, is currently under construction nearby beside the 3 Arena, with building work on the Dublin Landings office blocks also currently ongoing.

International hot desk firm WeWork has already signed a lease to move into a large portion of the Dublin Landings space, while US investment bank JP Morgan has agreed to purchase a segment of the nearby Capital Dock scheme.

The property agents for the new sites on the market said that the commercial plot for sale could be used as a ”prestigious waterfront HQ” for a large company in Dublin.

Despite the flurry of activity at the docklands, one local politician said that the area hasn’t seen the benefits of the massive regeneration project in the docklands and feel “pushed out”.

Social Democrat councillor Gary Gannon added there has also been a lot of talk of social housing which still hasn’t materialised.

“There’s a bit of resentment that’s kind of set in locally. The North Wall as a community already feels surrounded – residents feel like they’re being pushed out in many ways.

“Dublin isn’t a place that feels like you can aspire to raise a family anymore. In the docklands, you see a lot of transient communities working, but they’re not putting down roots.

“You’d like to see some sense that these developments would benefit the city, but there’s not a lot of planning for the long-term communities here. That’s not how a city sustains itself.”