PROPERTY GIANT HAMMERSON – the firm behind some of Dublin’s biggest shopping centres – has said that footfall was down by 3% in its Irish portfolio in the first half of the year.

The UK-based company, which entered the Irish market in 2015, co-owns Dundrum Town Centre, the Ilac Centre and the Pavilions Shopping Centre in Swords.

In its half-year results, Hammerson said that the drop in footfall at these locations was due to Ireland being “particularly badly hit” by Storm Emma in late February and early March.

The firm added that sales data is not currently available for its Irish portfolio, but noted that national retail sales have been strong, with growth of 4.5% in the first half of the year. 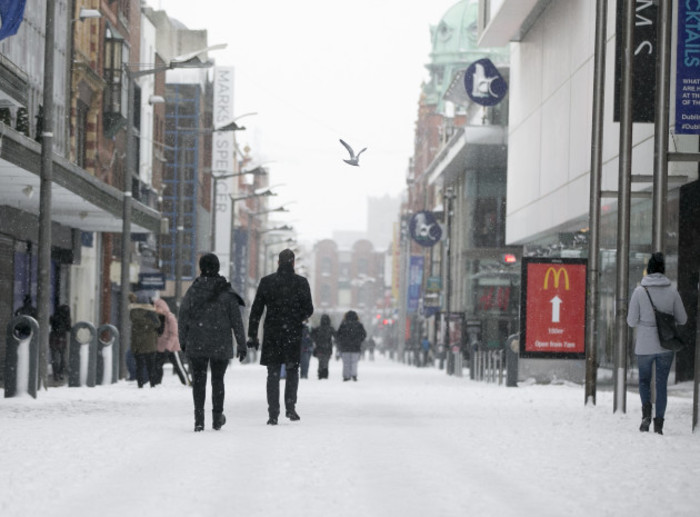 Despite a decline in footfall, Hammerson said that Dundrum and the Ilac Centre both produced “strong income growth” during this period due to recent tenant changes, which have “enhanced the retail mix and delivered higher rental income”.

Net rental income from the company’s Irish portfolio was £20.2 million for the first six months of the year, a like-for-like increase of 4% on the previous year’s tally. Occupancy rates were at 98.9%, a slight decrease on the figures for 2017.

Hammerson said that its focus in Dundrum will be the redevelopment of Pembroke Square – plans for which were recently approved and will include a new flagship Fallon & Byrne restaurant and food hall.

At the Pavilions centre, Hammerson announced last month that it will launch a new €3.3 million restaurant quarter in the second half of the year, which will include Five Guys and Milano.

Overall, Hammerson recorded a slight increase in adjusted profits for the first half of 2018, with the figure rising by 0.5% to £120 million.

The group said that continued growth in premium outlets and the Irish market offset a small decline in the valuation of its properties UK.

Hammerson also announced that it is changing its strategy, with plans to exit the retail parks sector in the UK.

David Atkins, the group’s chief executive, said Hammerson will now focus solely on “flagship retail destinations and premium outlets”, including its Irish centres, as these venues will “maintain relevance and outperform against the shifting retail backdrop”.

Earlier this year, Hammerson withdrew a €4 million bid to acquire Intu – the operator of a number of shopping centres in the UK including Manchester’s Trafford Centre.

The deal, which was first announced in December 2017, would have led to the creation of the biggest shopping centre group in the UK.

The company said this decision was made due to the deterioration of the UK retail property market since the start of the year.

This announcement came days after French mall operator Klépierre walked away from its €5.7 billion takeover bid for Hammerson after the company failed to provide “any meaningful engagement” with its proposals.