AS IT ANNOUNCES plans to hire more staff for its Irish operation, Facebook has also received the all-clear to make a number of upgrades to its new Dublin campus in Dublin 4.

During a visit to Dublin today, the tech giant’s head of operations Sheryl Sandberg revealed the company would hire an additional 1,000 workers across its Dublin and Cork offices and data centre in Meath.

Facebook’s Irish operation is its largest outside California, where it is headquartered. The company opened its Irish office in 2009 and has grown its Irish staff base from 30 to 4,000 in the intervening decade.

The tech firm’s main international office is currently based in Dublin’s ‘Silicon Docks’, but last year Facebook revealed it would relocate just over 2,000 of its Dublin-based workers to a new campus in Dublin 4.

The 5.6-hectare site in Ballsbridge, which is currently occupied by AIB, is located opposite the RDS and has the potential to house 7,000 workers.

Facebook’s new home is made up of four buildings across two blocks, which are split down the middle by the office development’s concourse.

After announcing its plans to take up the lease on the Dublin 4 property, planning permission was filed by developers to make a number of changes to the property “to address the requirements of the proposed tenant”.

The plans – filed the same day Facebook announced it would move into the property in November – included the construction of a network of bridges to connect the office blocks.

Documents sent to Dublin council show that one of the three bridges would span the width of the campus square and be visible from the road in front of the RDS.

The 24m bridge across the concourse would connect the second level of each office block, while a pair of shorter two-storey bridges would also link the office blocks adjacent to one another. 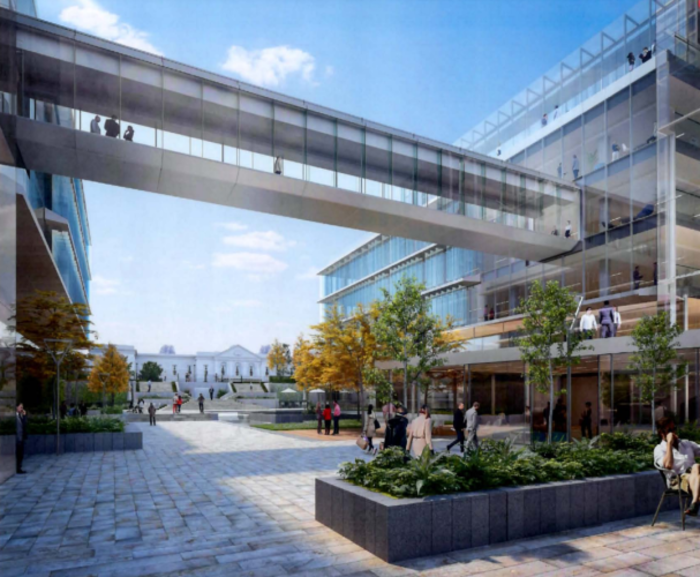 Prior to the announcement that Facebook would lease the site, the developers of the project – Fibonacci Property ICAV – made numerous applications for planning permission to modernise the AIB bankcentre in Ballsbridge.

Its applications were largely approved by Dublin council, with some elements of the new developments proposed slightly downsized by the local authority.

In the group’s latest application to develop the site, Fibonacci Property indicated that changes to the roof of each office block had been requested by the new tenant to help the buildings blend in with the skyline.

Facebook also requested some structural amendments to the building that would make the building more friendly to an open-plan office setting.

The local authority also approved that request and the creation of two large atriums at ground level to face onto the campus concourse. The developers said these halls would make the concourse more of a focal point. 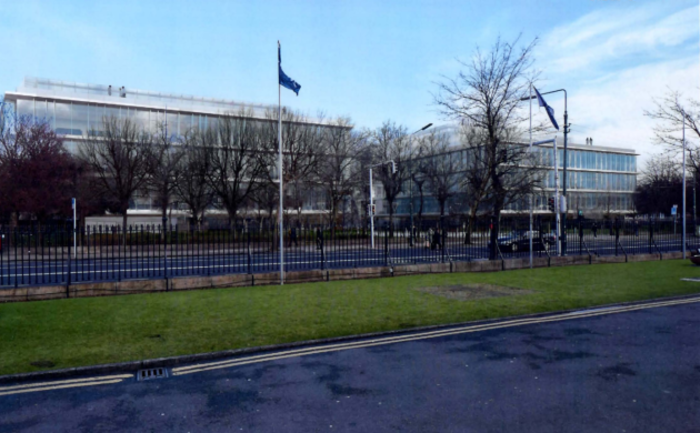 A mock-up of the office development
Source: DCC

When Facebook revealed it would relocate to Dublin 4, the Irish Times reported that staff could start moving into the offices as early as March or April of this year.

In her address today, Sandberg said that Facebook plans to hire the new 1,000 staff this year and that the company is looking for employees for its engineering, safety, legal, policy, marketing and sales teams.

Facebook’s plans to ramp up its presence in Ireland have come at a time when other large tech firms are also bolstering their Irish bases.

Fellow tech giant Google is also gearing up to increase staff at its Dublin operation and has acquired a number of new office blocks to house employees in Dublin’s ‘Silicon Docks’.