DESPITE THERE BEING no timeline or government commitment to fund the project, the long-delayed Dart Underground has halted development plans for a prime Dublin site.

Earlier this year, the government revealed the projects that will be funded as part of Project Ireland 2040, the country’s €116 billion national planning and capital expenditure plans.

The Dart Underground, which was first proposed in the 1970s, was not listed as one of the projects in line for State funding.

When Project Ireland 2040 was announced, a spokesman for Irish Rail conceded that the project’s absence from the list means it has been delayed further. However, he was adamant the project has not been shelved altogether.

Nevertheless, An Bord Pleanála this week cited the dormant project in its rejection of planning permission for a Dublin city centre office block.

Last year, Rails Investment Ltd requested to build on a site near Pearse Station that had been earmarked as the location for one of the main stations on the proposed Dart Underground route.

The Maltese firm planned to knock down a warehouse on Sandwith Street and replace it with a seven-storey office block.

However a third-party objection sent by Irish Rail to Dublin City Council highlighted that the office block would occupy “lands necessary” for the urban rail project.

It added that the location will be an “extremely critical hub” for the transport project because it would house a tunnel to link all rail, Dart and Luas services in the capital. 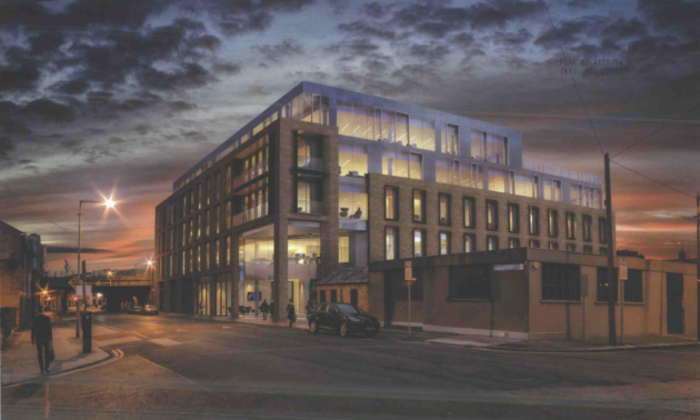 An artist's impression of the proposed building
Source: DCC

Officials from Irish Rail met with the developers to discuss modified plans for the office block that would potentially safeguard the future of the Dart Underground project, but a compromise was never reached.

Dublin council rejected the planning request based on Irish Rail’s concerns, but Rails Investment appealed the decision to An Bord Pleanála.

The firm argued that the plans for the Dart Underground do not “clearly identify the route of the underground and certainly not the location of underground stations”.

It also noted that there is no timeline for the commencement of works on the underground project.

Despite the protests, the national planning authority upheld the decision of the council because the office block would contravene certain aspects of Dublin’s city development plan.

“(It) seeks to promote to facilitate the provision of metro, all heavy elements of the Dart expansion programme including Dart Underground (rail interconnector) in order to achieve strategic transport objectives.”

A computer render of the Dart Underground
Source: YouTube

As previously reported by Fora, the planning battle over the site arose because Irish Rail has not been able to buy the Sandwith Street warehouse since it has not yet received government funding for the Dart Underground project.

Irish Rail spokesman Barry Kenny said if the office block got the go-ahead, it would inflate the cost of the Dart project by “tens and hundreds of millions”.

Irish Rail started seriously working on the underground project in 2002, however it has been plagued by delays and was shelved during the recession due to its expense.

The estimated cost of building the tunnel is €3 billion, while it is estimated that €1 billion would be spent on expanding Dart services through measures such as electrifying lines.