A PLAN TO build a new office block near Pearse Street has been blocked by Dublin council because it could scupper the €4.5 billion Dart underground project.

Last year, Maltese-registered company Rails Investment Ltd applied for planning permission to demolish a warehouse on Sandwith Street and replace it with a seven-storey office block.

The site has been previously earmarked as the location for one of the main stations in the proposed Dart underground – a project that was previously shelved but according to Transport Minister Shane Ross is still “alive”.

In a submission to Dublin City Council last year, Irish Rail highlighted that the office block would occupy “lands necessary” for transport project.

According to the semi-state body, the site would be an “extremely critical hub” for the Dart underground as it would be the location of a tunnel to link all rail, Dart and Luas services in the capital.

As reported by Fora earlier this year, this issue has arisen since Irish Rail was not able to buy the warehouse because it has not yet received government funding for the project.

Irish Rail spokesman Barry Kenny said if the office block got the go-ahead, it would inflate the cost of the Dart project by “tens and hundreds of millions”. 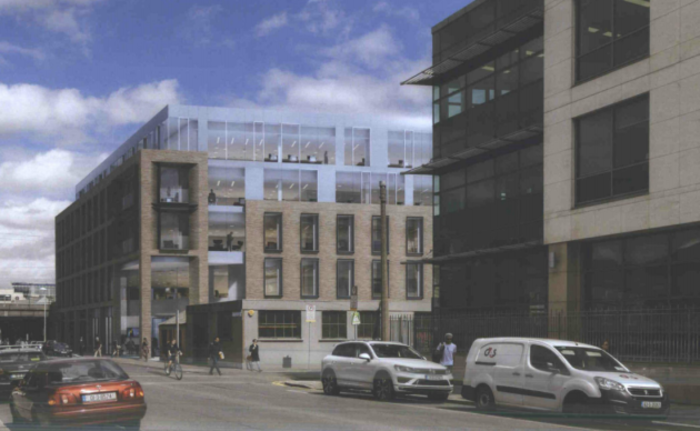 An artist's impression of the proposed building

Since the planning dispute erupted last year, Irish Rail officials met with Rails Investment Ltd to review modified plans for the office block that would potentially safeguard the future of the Dart underground project.

In a letter to Dublin council’s planning department last month, Irish Rail said that following consultations in August with the developer, it still has “a number of concerns on the revised proposals”.

Irish Rail added that it expected “a far greater level of engagement” from the developer which it said “did not occur in advance of the submission of the modified design”.

It said the proposed development in its current form would still compromise the Dart underground project.

Several days after it received the correspondence from Irish Rail, Dublin council upheld the semi-state’s concerns and refused planning permission for the office block.

In its ruling, the council said the organisation has a duty to help the creation of metro projects in the capital as outlined in the Dublin city development plan.

It said the lands are necessary for the delivery of Dart underground and the development as proposed has the potential to compromise the integrity of the project.

A computer render of the Dart Underground
Source: YouTube

Recent filings with the Dublin council planning office show that Rails Investment Ltd has decided to appeal the decision of the local authority to An Bord Pleanála.

The firm has argued that the office development fulfills several key objectives of the Dublin city development plan as the Irish capital suffers from an acute shortage of grade A office space.

It added that upon a review of the Dart underground plans, it could not find anything to “clearly identify the route of the underground and certainly not the location of underground stations”.

Rails Investment Ltd also highlighted that there is no timeline for the commencement of works on the long-delayed underground project.

A decision from An Bord Pleanála on the planning dispute is due in 2018.