Most recently, we detailed the story behind a plan to build a sprawling luxury hotel in Kilternan, south county Dublin. Tools were downed on the project when it was about 90% finished, and it has lain empty in a near-complete stage for almost a decade.

For this installment, we’re going back to the centre of the capital to examine what could have been the tallest building in the country.

We previously looked at the U2 tower, a proposed skyscraper that would have been built on the south side of the mouth of the Liffey. It seems only right to look at its north-side counterpart, the Watchtower.

The Watchtower was to be the centrepiece of the ‘Point Village’ project spearheaded by builder Harry Crosbie.

His vision was to develop a ‘city within a city’ that would feature offices, a huge shopping centre and a 250-bed hotel. The Watchtower would be the standout feature of the project – a huge 40-storey tower that would rise above the city.

At 120m it would be about the same height as the Spire and the proposed U2 tower. The two skyscrapers would have formed a kind of gateway to Dublin at the mouth of the river.

As the U2 tower never got off the ground, if the Watchtower had gone ahead it would have been the tallest building in the state. The building would have been primarily made up of luxury apartments as well as some office space and an exterior rooftop bar and restaurant offering panoramic views over Dublin bay.

While Crosbie was looking to progress his ‘Point Village’ dream for years, work seriously got under way in 2006.

The entire Point Village scheme was given planning permission by the now-defunct Dublin Docklands Development Authority (DDDA) in 2006.

The foundations of the project were laid soon afterwards, and it looked like the Watchtower would beat its counterpart across the river and be the first skyscraper built in Dublin.

Then in 2008 the property market collapsed. The U2 tower was put on hold and almost immediately people started questioning whether the Watchtower was still feasible.

Crosbie insisted that the project was still viable, however it was reported in 2009 that he was in negotiations with the DDDA to change the tower so that it would be mainly composed of office, rather than residential, space.

This was done as the residential property market was virtually wiped out overnight. However, it soon became clear that the Watchtower was unlikely to be finished despite the fact that work had started on the building. 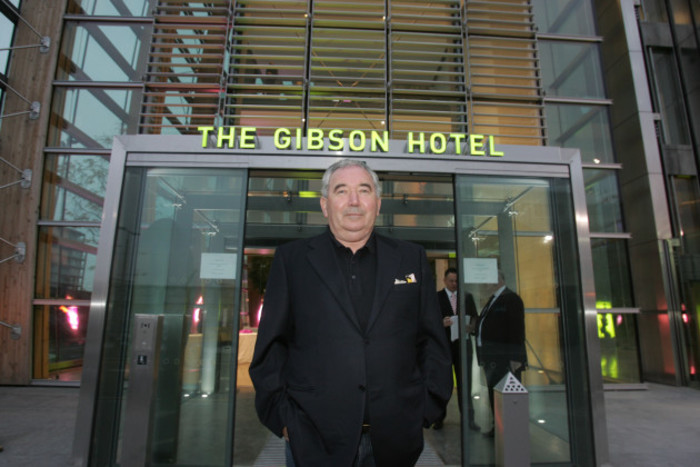 In 2010 Crosbie told the Sunday Times: “I have €15 million trapped in the ground. I had to cover it over and forget about it. We put huge amounts of work into it. Years . . . But it ain’t over yet. We don’t do giving up.”

Crosbie’s loans were transferred to Nama, and in 2013 the state bad-bank appointed receivers to the Point Village complex, consigning the Watchtower project to the scrapheap.

While the Watchtower is no more, like the U2 tower, something at least is to be built in its place.

The Nama-appointed receivers announced plans earlier this year to appoint a contractor to build a 79m-high structure called ‘the Exo’.

If completed, it would be Dublin’s largest office block. Planning permission for the 170,000 sq ft office building was approved in March 2016 under fast-track planning rules, and the hope is that it can be built over the next two years.

The building will now match the similarly scaled down Capital Dock scheme, which is being built on the site of the planned U2 tower.

While it looks likely that there will be two large buildings at the mouth of the Liffey, they likely won’t quite match Crosbie’s original vision.