OVER THE HOLIDAY period, Fora is taking a look at some of the more notable big-ticket projects that were floated in the run-up to the Celtic Tiger and in the aftermath of its demise.

For the final instalment, we’re looking at something that has been a hot topic of debate for over a decade – whether Dublin should build skyscrapers.

To narrow the focus a bit, we’re going to look at a project that would have been Ireland’s tallest building, and the country’s first true skyscraper had it been delivered – the U2 tower.

In the late 90s, the Dublin Docklands Development Authority (DDDA) was set up to regenerate many of the disused sites that had been left idle near the mouth of the River Liffey.

U2 became involved after the DDDA put a compulsory purchase order on the band’s old recording studio in Grand Canal Dock.

After appealing the decision to An Bord Pleanála, a deal was struck that would have allowed U2 to have the top two floors of a new landmark tower, which would also bear the group’s name.

After running a competition that received more than 500 entries, a ‘twisting’ design was selected for the tower. Originally to be 78m tall, the plan was revised so that the height could be increased to 130m and the shape changed to a ’tilted triangle’. 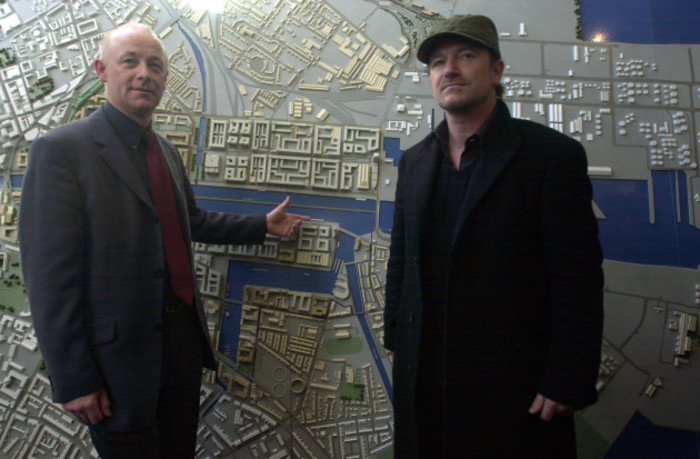 At 130m it would have been easily the tallest storied building on the island of Ireland and 10m taller than the Spire in Dublin. The plans included an egg-shaped recording studio for U2 to be suspended at the top of the tower from a 600-ft apartment block.

The tower was to include 34 social flats, with the remainder of the accommodation consisting of luxury apartments, as well as an “energy centre” containing wind turbines and a large solar panel. It would have had 36 stories.

A consortium made up of building firm Ballymore properties, noted developer Paddy McKillen and U2 Band members and management was selected to construct and finance the tower.

The architectural design competition for the tower was first announced in October 2002.

After the initial announcement, the tower was caught up in planning red tape, which slowed the project down. A similar development, ‘the Watchtower’, also faced hurdles which further slowed things down.

Conceived by developer Harry Crosbie, who revitalised the Point Depot and built the Point Village, the Watchtower was to be a 120m tower opposite the U2 Tower on the southern side of the Liffey.

It was intended that the two would serve as a landmark gateway to Dublin, and the docklands authorities got Crosbie to revamp his tower after they felt that the original design was ‘too bland’.

The design for the U2 tower
Source: RollingNews.ie

Both towers were eventually given the go-ahead, although in the meantime cost estimates for the U2 tower spiralled. Newspaper reports, such as one in the Irish Times in October 2006, put the estimated construction cost of the project at between €55 million and €100 million.

However, by the same time the following year that figure had jumped to €200 million, and there was speculation that the extravagant twisting design of the tower was simply too costly and would need to be simplified.

The financial crisis sounded the final death knell for the U2 tower. In October 2008, the DDDA announced work on the tower was to be put on hold for 12 months, shelving the project. Like many other property groups, Ballymore’s loans went into Nama, and the state ‘bad bank’ took control of the site from the DDDA in 2011.

There were occasional reports, particularly in 2013, when the economy began to recover, that the tower would be revived, but nothing ever came of the plans. 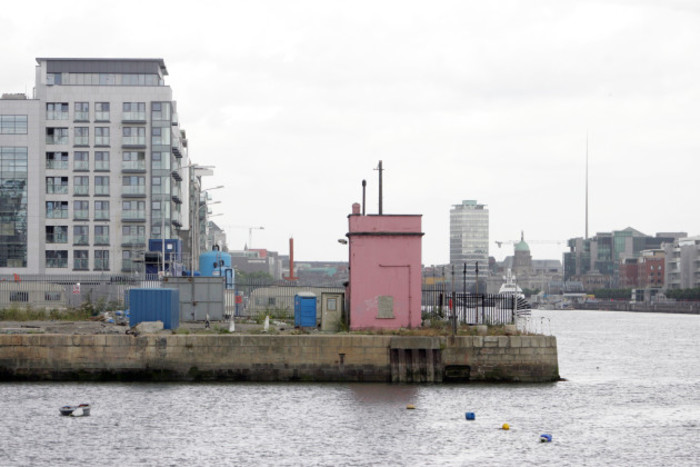 A 2006 image of the site where the tower was to be built
Source: RollingNews.ie

In July 2013, the Irish Independent reported that US private equity firm Kennedy Wilson, which bought up large swathes of Irish property during the crash, was looking at reviving the scheme.

However, it now looks like the firm will build a 23-storey apartment tower 79m tall as part of its Capital Dock scheme, even though an 88m structure is permitted under zoning on the site. U2 no longer appear to have any involvement.

Even if the Kennedy Wilson’s proposal goes ahead as planned, it is very unlikely to be as large or grandiose as the never-built U2 tower.