THE COST OF Irish small business loans, currently among the most expensive in the EU, won’t go down until a new lender enters the market.

That is according to the chairman of the Small Firms Association, AJ Noonan, who was speaking at the organisation’s annual conference today.

Last year Irish companies paid average interest of about 6% on loans of €250,000 or less, almost twice as much as their eurozone neighbours.

Noonan told Fora that the only thing that will make a major impact on the cost of credit is a new entrant into the Irish business lending market.

“To make money you have to have money so the issue of the cost of credit is becoming a big factor in business in Ireland,” he said.

“We need another couple of SME banks that will come into the country and drive competition, which will ultimately drive rates down.”

AIB and the Bank of Ireland currently have an effective duopoly in the Irish market when it comes to business lending.

Noonan said that new lenders need to be “encouraged” to move into the SME business, adding that the government needs to create a suitable environment to tempt new banks in although there is no ‘silver bullet’ solution.

He argued that lowering the capital gains tax rate, which is currently set at 33%, would make the country more competitive against the UK, create a more positive environment for business and in turn encourage new lenders.

The government has proposed a lower, 10% capital gains tax rate, however the incentive will only apply to startup companies.

“A lot of our members are over 20 years in business and it ain’t going to affect them,” Noonan said. 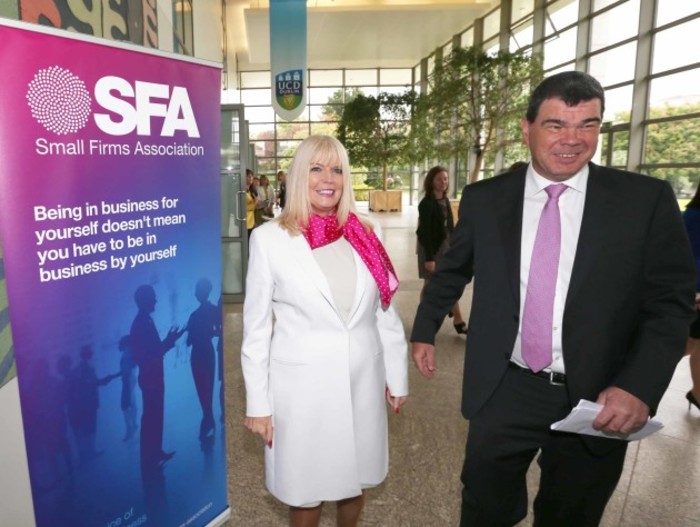 Noonan said he would like to see capital gains tax cut to 10% for entrepreneurs on disposals worth up to €10 million and 20% on “all other activities”.

The SFA also published its ‘vision for small business in Ireland’ ahead of its conference today. The document includes more than 60 recommendations for government, including:

The SFA also published its summer business sentiment survey which polled almost 700 of the organisation’s members.

Some 60% of respondents said that their businesses are growing. Two-thirds think that the business environment is improving, 30% feel there is no change while just 3% think it is getting worse.

Almost three-quarters of those polled intend to take on new staff this year, with the average number of jobs growth being six.