THE HIGH COST of borrowing is preventing small businesses from growing, the government’s competitiveness watchdog says.

Irish companies paid an average interest rate of about 6% on small business loans in 2015, almost twice our eurozone neighbours on average.

In a report for the Department of Jobs, the National Competitiveness Council said that this premium was acting as a “drag” on businesses and warned that the gap between Ireland and the rest of the eurozone must not be allowed to widen further.

“Irish interest rates on business loans have been consistently higher than equivalent euro area rates and it is vital that cost competitiveness in this area does not weaken further,” the report said.

It added: “The cost of credit continues to act as a drag on the enterprise sector, inhibiting investment and growth, particularly amongst startups and SMEs.”

The report noted that bank loans are still far and away the most common tool used by Irish SMEs to finance their businesses. 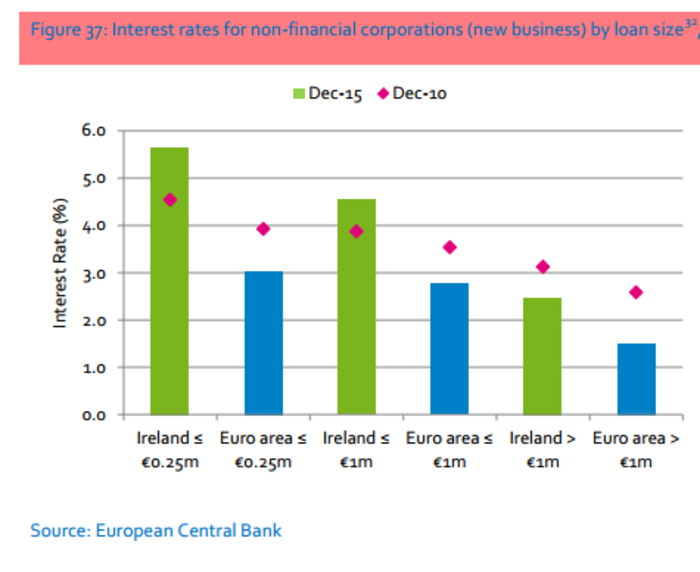 It pointed to the CSO’s ‘access to finance’ survey which showed that one in five SMEs applied for bank finance in 2014.

“As access to finance becomes easier and more sources of funding become available, the differential in bank interest rates between Ireland and the euro area assumes greater importance,” it said.

“Furthermore, Irish interest rates for loans both under and over the €1 million threshold have been noticeably more volatile than euro area rates. Irish and euro area interest rates diverged further in 2014 and 2015.”

The council also said the costs of both commercial and residential property were major causes of concern.

He pointed out that the boom and bust cycle in the property sector had been at the heart of Ireland’s recent economic problems, adding: “We must try to avoid this sector undermining the current economic recovery and threatening its sustainability in the future.”

Jobs Minister Richard Bruton said that the report was a reminder of the need for “continued vigilance” on Ireland’s competitiveness.

“During the Celtic Tiger we saw how a vicious circle of rising costs for business and rising cost of living leading to unsustainable increases in labour costs and public spending, ultimately eroded competitiveness and led to job losses and recession,” he said.

“As we enter a precarious period for our economy and our country, the need for careful and prudent management of the economy and competitiveness has rarely been greater”.

Read: Irish businesses are paying the highest interest rates in the eurozone