THE RATE OF unemployment in Ireland has hit the lowest level since June 2008, however analysts say suggestions that Ireland is reaching full employment are “wide of the mark”.

The latest Central Statistics Office (CSO) monthly unemployment figures released today showed that the unemployment rate for last month was 6.3% – down from 8.3% at the same stage last year.

Despite the continued downward trend in unemployment figures over the past few years, stockbroker Davy has highlighted that recovery in the jobs sector still has “a long way” to go.

Davy economist David McNamara said that recent commentary which suggested the Irish economy is now close to full employment is “wide of the mark”.

Earlier this year, former minister for finance Michael Noonan said that Ireland was “heading down towards full employment”. A biannual update from the Department of Finance in April said that the Republic could hit full employment in 2018.

“Taking this broad range of indicators into account suggests that the recovery has further to run.” 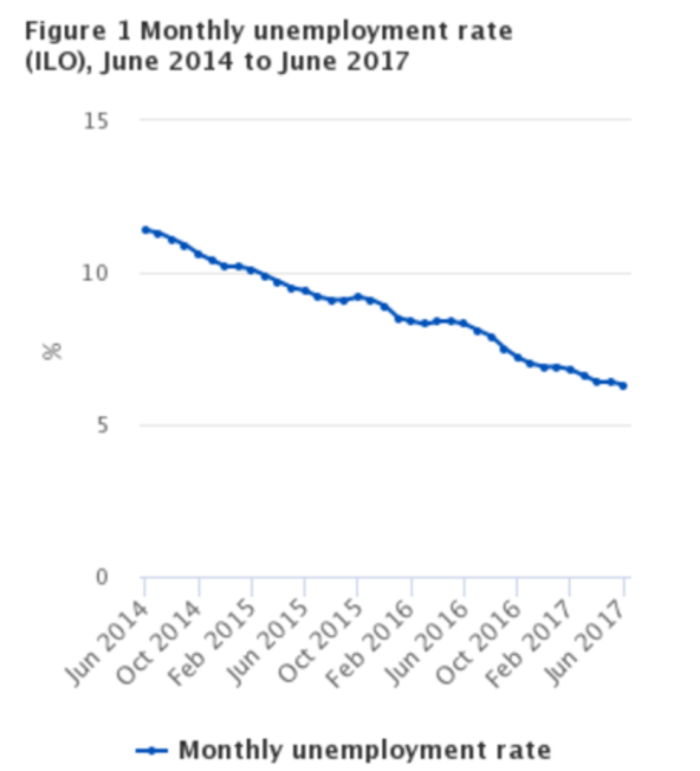 He added that the continued “robust jobs growth” of recent quarters has continued in Q2 of this year and the “enormous” increase in the number of people at work could force Davy to change its employment forecast for 2017.

The unemployment rate in Ireland peaked in 2012 when it stood at just over 15%. However, Ireland’s jobless rate is now lower than the European average of 9.3%.

Earlier this year, CSO data showed that the number of people in full-time work around Ireland has jumped dramatically over the past year.

The increase in people at work is part of a trend that has seen the number of unemployed people in Ireland decrease by 42,800 compared to May 2016. Nationwide there are more than 2 million now recorded as in work.