THE NUMBER OF people in full-time work around Ireland has jumped dramatically over the past year as the jobs market continues its climb out of the doldrums.

Monthly unemployment data released today by the Central Statistics Office (CSO) showed that the jobless rate held steady at 6.4% in May – despite a seasonally adjusted decrease of 1,200 in the numbers unemployed.

In a briefing note on the figures, Davy chief economist Conall Mac Coille said the static unemployment rate “does not provide any reason to worry the rapid growth in Irish employment is slowing”.

“In fact, the key puzzle in Ireland’s labour market has been that the unemployment rate has been falling too quickly,” he said.

Mac Coille noted that there had been a “staggering” 5.5% rise in full-time jobs over the past year, while there was a 3.4% drop in part-time work during the same period.

The increase in people at work this month is part of a trend that has seen the number of unemployed people in Ireland decrease by 42,800 compared to May 2016. Nationwide there are more than 2 million now recorded as in work.

Meanwhile growth in private sector employment stands at 3.7%, while the public sector only marginally increased at 0.8%. 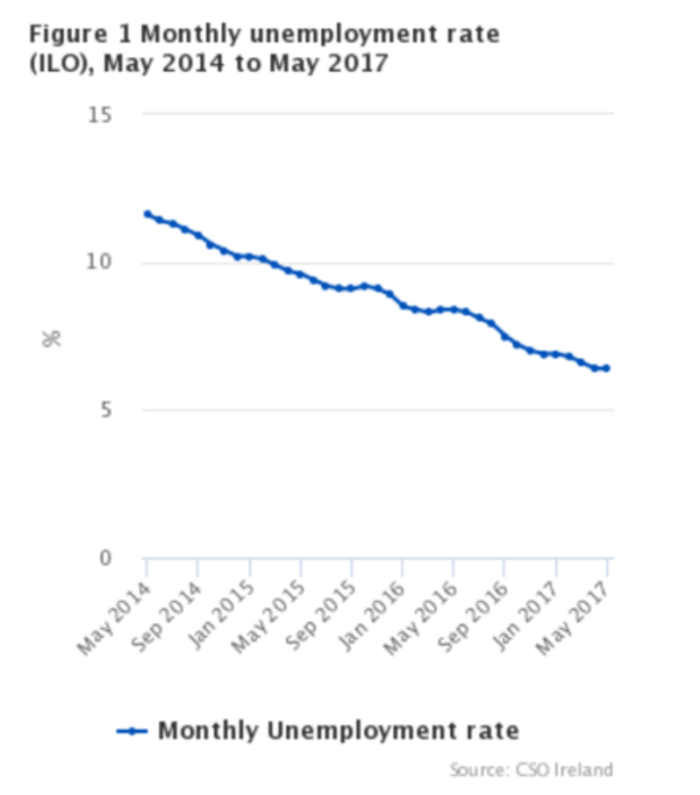 Mac Coille added that there was still plenty of potential for the numbers in work to keep growing in the coming years.

“Muted” growth in the labour force, due to weak participation and outward migration, has helped speed up the drop in unemployment, although migration turned positive again last year.

“So if anything, the fall in the unemployment rate to 6.4% understates the remaining capacity for catch-up in Ireland’s labour market,” Mac Coille said.

The latest purchasing manager indices for the construction, manufacturing and services sectors in Ireland indicated sustained and rapid jobs growth will take place in the second half of the year.

Meanwhile, the latest CSO figures on workers’ earnings also pointed to a more buoyant jobs market. The data, released last week, showed average income was up 1.4% over the past year, led by sharp rises in administration and construction roles.