According to the Construction Industry Federation’s annual ranking of its top 50 member-contractors, Ireland’s biggest builders recorded combined sales of more than €6.7 billion in their most recent financial year.

The bulk of that figure – some €5.1 billion – was attributed to Irish building projects while the rest came from exported construction services.

The leaderboard was compiled by trade publication Construction Magazine, the CIF’s official magazine. The turnover figures were obtained directly from contractors who are members of the organisation.

The biggest builder in the country by turnover was John Sisk & Son (Holdings) Limited, which swept up €950 million in sales last year.

The 150-year-old construction firm has been behind many of the country’s biggest construction projects. It is currently building the €230 million Center Parcs holiday camp in Co Longford.

Dublin-headquartered Mercury Engineering came in second place with annual sales of €600 million, while BAM Civil Ltd placed third with a turnover of €470 million.

John Paul Construction Ltd and Jones Engineering Group rounded off the top five with sales of €360 million and €350 million respectively. 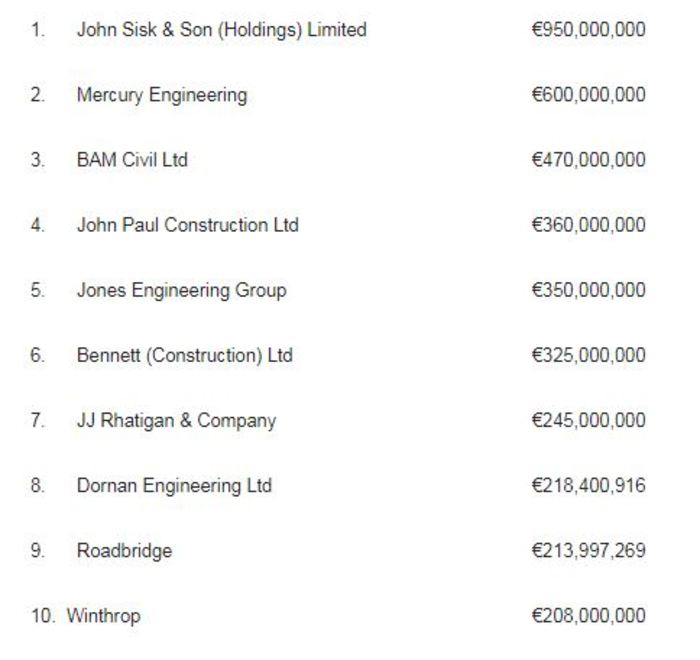 Commenting on Construction Magazine’s ranking, CIF director general Tom Parlon said the construction industry has “emerged from the depths of the recession” in good shape but noted that there are “significant improvements” required to help the sector grow.

“We need the government to set out an export-led growth strategy for this important sector. We also need to fix our procurement system here at home and ensure the right supports are in place to help build companies of scale,” he said.

Parlon added that work needs to be done to attract skilled workers back into the industry and to “make the process of moving home from abroad and gaining work in the sector more streamlined”.

As previously report by Fora, there is a shortage of certain skills in the sector and companies are crying out for entry-level workers, especially in urban centres like Dublin, Limerick and Cork where there is strong demand for commercial and residential property.

A recently study published by the Society of Chartered Surveyors Ireland suggested that there will be a shortage of more than 2,000 property surveyors over the next four years.