MANNA, THE DRONE food delivery startup led by Bobby Healy, plans to launch its hamburger-toting aircraft by the end of the year through a partnership with Flipdish.

The first major leap in those plans is taking shape through a partnership with food ordering software company Flipdish to carry out its first deliveries with “selected restaurants” in the capital, by the last quarter of 2019.

Manna claims that deliveries will be carried out within three minutes, from restaurant to destination, travelling at 80 km/hr.

The drone will carry the payload to the delivery address and rather than land in the location, it will lower the food from a height of about 10 or 15 metres using a biodegradable thread.

Conor McCarthy, chief executive of Flipdish, told Fora that through the Manna partnership, its restaurants will be able to add drone delivery options to their services.

A drone service will be quicker and more efficient than delivery drivers, McCarthy said.

“It is a safer thing overall to have drones than people on mopeds and bikes in and around traffic, producing pollution. Based on that it seems likely that it definitely should happen.” 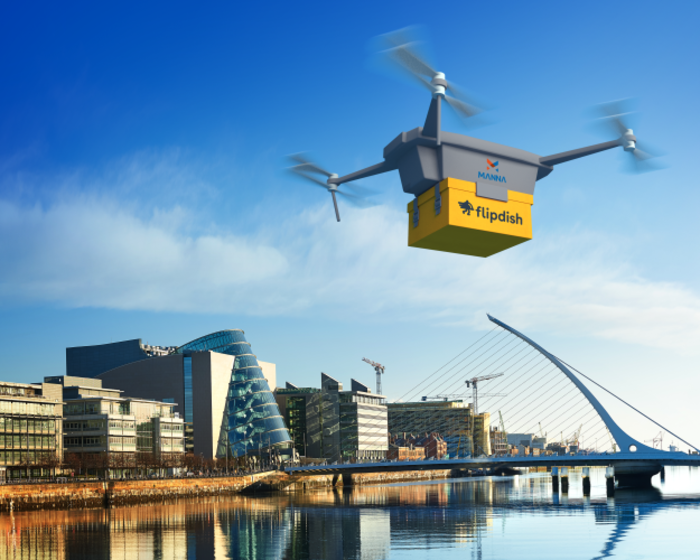 Drone delivery is still fraught with regulatory hurdles. Healy previously told Fora that it was engaging with Irish aviation regulators to secure appropriate approvals for its plans.

Fora was unable to reach Healy for further comment in time for publication.

Flipdish’s McCarthy said that he’s confident that the regulation will be welcoming in the end.

“If the regulations don’t go through, it can’t happen but my understanding is that there’s a clear path to allow that to happen and it makes a lot of sense for it to happen,” he said.

“I definitely think it will happen but it’s just a matter of making sure that it’s safe and that the regulations are followed.”

Flipdish and Manna also plan to roll out services in the UK in the future. Manna has raised around €10 million so far from VCs including Elkstone Capital and Frontline Ventures.