THE AMOUNT INVESTED under a government scheme designed to get people backing SMEs has hit near-record levels, according to new figures.

Figures supplied by the Revenue Commissioners to Fora show it is estimated that just under €93 million was invested under the Employment and Investment Incentive Scheme (EIIS) last year, a near-50% increase compared to 2014 and more than double the amount put in during 2013.

EIIS is a measure that allows investors to write off some of the money they put into suitable companies. It was introduced in 2012 to replace the old Business Expansion Scheme (BES).

The investment figures for 2015 compare favourably with those made under BES. Although the €93 million estimate does not approach the record €135.7 million invested through BES in 2008, it is higher than the amount put in during any other year since the turn of the century. 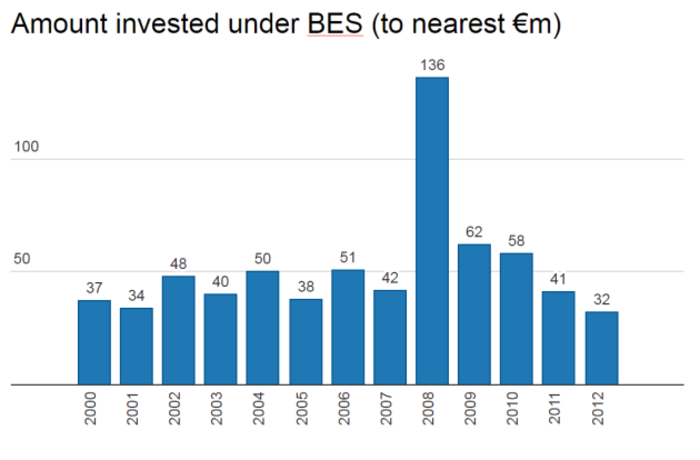 BES was introduced in 1984 and has been tweaked and overhauled multiple times since then.

The idea of the scheme is to allow companies operating in certain sectors, who would normally only be able to receive loans, to get long-term equity finance.

Thousands of companies, including household names such as Glenisk yogurts and Java Republic coffee, have availed of the scheme since its introduction.

It is available to businesses that have fewer than 250 employees and have an annual turnover of under €50 million. Certain sectors, such as forestry and land development, are not eligible.

Under the scheme, investors can get income tax relief of up to 30% on investments of a maximum of €150,000 a year. An extra 11% relief can be claimed if the company shows it increased its staff numbers over a three-year-period, or if it proves that the money from the investors was used for research and development.

A maximum €10 million can be invested in any one company under the scheme, or €2.5 million in a 12-month period.

Read: Nearly three years after it was announced, this tax break for traders is still AWOL

Read: The man behind the money: Meet one of the country’s best investors