BRIAN CAULFIELD HAS a brilliant idea for one last startup business, but he doesn’t want you to know what it is.

“It’s probably the best idea that I’d ever had,” he tells Fora. “But it’s too long and boring to share.”

That is very doubtful. Caulfield is one of the country’s sharpest businessmen, co-founding two successful tech firms before flipping them for huge sums when such a thing was a genuine rarity in Ireland.

His first, a company called Exceptis Technologies that sorted out disputed online card payments, was sold for $26 million to an Irish rival called Trintech in 2000. Similarity Systems, which developed software so company data is up-to-date, managed more than double that when it was acquired for $55 million in 2006.

If Caulfield thinks his business idea is the best one he’s ever had, it’s pretty unlikely it would end up as the next New Coke.

The Trinity College engineering graduate is one step back these days, manning the lone Irish office of Draper Esprit, one of Europe’s largest venture capital firms.

The view from Caulfield’s office is spectacular, an unbroken look across the city and the River Liffey from five stories up. You can almost make out Croke Park, no doubt appealing to his county pride.

After mentioning that he lived in England until the age of five, he is quick to correct the record. The next sentence out of his mouth is: “From the age of five I lived in Killiney, my mother is from Drimnagh and my dad is from Kilmainham; I consider myself a pure Dub.”

Anyone peering in the window would be less impressed. Caulfield’s office is small and relatively bare aside from a few papers strewn around the room, although this doesn’t matter much when Caulfield is travelling so much.

“I’d say I do about 100 flights a year, Draper’s portfolio is across Europe so there’s a lot of travelling,” he says.

He looks somewhat bemused when it is suggested that the travel is a perk of the job. “Because most of the guys are based in London I go over to them every week. The 4.45am start on a Monday is the least favourite part of my job.”

Working in venture capital requires Caulfield to keep a lot of plates spinning at once. Draper has invested in some of Ireland’s most promising tech stars such as Movidius, whose chip will be used to power a standalone virtual reality headset being built by Google, and communications software maker Datahug, as well as a raft of companies throughout Europe. 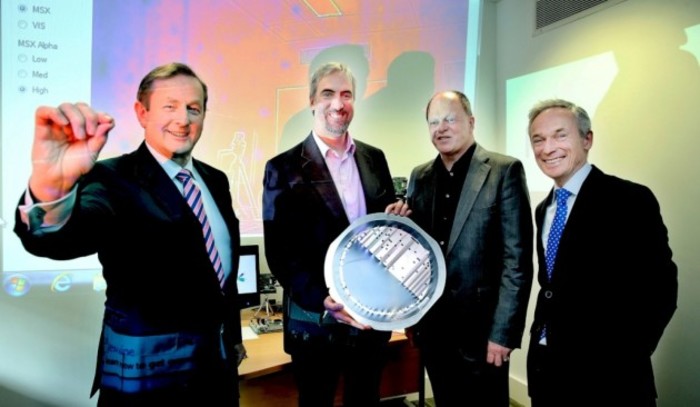 Caulfield provides support and advice to management to ensure the businesses are going in the right direction, and, of course, looks to ensure a return on Draper’s investment.

While he enjoys his work, he can’t help but get a little bit misty-eyed when talk turns to building up a business.

“I stayed with Trintech for a while (after it acquired Exceptis) but when I decided to leave the thing that really broke me up was walking away from the team – and you don’t have that in VC,” he says.

He adds “I’m committed to a path now”, before pausing to go off on a bit of a tangent.

“There’s this professor in Stanford who does a little comedy routine about how his son moved to Pittsburgh to take a professorship.

“On his CV there’s this rationalisation of why it was a fantastic opportunity to move and take a professorship, but what it never says on your CV is ‘moved to Pittsburgh for girl’. I think that says a lot about life.

“You make choices and commit to paths. I think when you make that kind of commitment and take on responsibility you cut off some avenues…,” he trails off, looking thoughtful.

Talk turns to how Exceptis was started and a gleam leaps into Caulfield’s eye. “I very briefly had a real job working for a subsidiary of a Swiss multinational called Landis & Gyr,” he says.

“The subsidiary I worked for, Peregrine Systems, were essentially developing artificial intelligence systems for a variety of applications. (Landis & Gyr) were under a lot of financial pressure and were either selling off or shutting down any business that was non-core business … so essentially I was laid off.”

“With three of my colleagues we decided to start our own business. We were able to buy the assets of Peregrine Systems for two Swiss Francs, but we took on obligations to support customers outside of Landis & Gyr group. So it wasn’t as simple as ‘here’s two euro’ and they give us all the assets.”

After a few years Peregrine, which changed its name to Exceptis after a trademark dispute, built itself up and was set to merge with an American company called Paylinks.

Caulfield was told that the combined company would go public, have an initial market capitalisation of $400 million and swiftly trade up to $1 billion. This would have valued Caulfield’s personal stake at about $160 million; however, Paylinks got cold feet when the dotcom bubble burst and backed out, leaving Exceptis to be snapped up by Trintech.

Caulfield takes a philosophical view of the experience, saying: “It didn’t feel like a crushing blow. I suppose I took an ‘easy come, easy go’ approach.

“I never actually had the money so I didn’t feel like I lost. When you are an entrepreneur you have to roll with the punches.”

Although it was difficult building up Exceptis - Caulfield alludes to a few very rough patches that he won’t go into – he says the thought of getting another ‘regular’ job never even crossed his mind.

This is despite the fact that his pay took a bit of a hit after the move – dropping from 28,000 Irish pounds to 10,000 while there was a mortgage and bills to be paid – and that his wife was slightly less enthusiastic about the venture. The two have been married for years – “no kids, unfortunately,” Caulfield says – but share different world views.

“I think she’s reasonably happy with the way it’s worked out (but) I’m not so sure she was enthusiastic at the time,” he laughs.

“Helen is financially conservative, she’s relatively risk-averse, but having said that she never for a second tried to talk me out of it. It would be fair to say she was incredibly supportive, and she even ended up working at the business and becoming a key part of the first company.”

When he’s asked if he thinks being made redundant worked out for him he’s pretty unambiguous. “Oh God yes! I think now I would just die working in a large organisation, it would just frustrate the hell out me.

“To be in a box and have a clearly delineated role where people give out to you if you step outside that box, I just hate the idea of that.”

A venture capital investor, Delta Partners, helped to build up Exceptis, impressing Caulfield so much he started musing another change in career.

“Shay Garvey was the partner from Delta who joined our board. Shay had an approach to thinking about strategy that I would say I didn’t have and brought discipline and focus to what we were doing,” he says.

“I think my experience of working with Shay was hugely positive and gave me a positive view on what venture investors and entrepreneurs could accomplish together.”

Although he was tempted to move into venture capital straight away, Caulfield decided to focus on helping to found more new businesses to, in his own words “serve his apprenticeship” first.

Similarity Systems was a hit while Prediction Dynamics, which developed trading and risk management software, went under, folding in 2004 before it had moved out of its research and development phase. Caulfield says telling the Prediction staff that the company was shutting up shop was one of the most difficult moments of his career.

“I remember myself and (co-founder) John Carney went into the office to tell the staff that we had to close the business and they were all unemployed, it was one of the hardest things I ever had to do,” he said.

“I think the big lesson from that is that you are not invincible. Sometimes entrepreneurs who are successful, especially with their first business, think they have a template for success. The reality is that there is a lot of luck in success.”

He adds: “I always like entrepreneurs who recognise that. I always think how there are guys who are just as smart or hard-working as me, who didn’t end up as well off because things didn’t go their way or they got a few bad breaks. You just have to try and remain humble and realise that you’re not a genius.”

Between Similarity and Prediction, Caulfield felt he had built up enough experience to try his hand in venture capital.

Now holding the cash, Caulfield either sat on the boards of, or led investments in, a string of successful companies including Ezetop (now Ding), AePONA (which was sold to Intel for $120 million) and Imagine Broadband. Despite this, the desire to strike out on his own one last time seems to constantly nag.

“The hankering is always there to think about doing a startup,” he admits.

“There are things about doing a startup that venture capital can never give you. There’s a limit to the extent to which you can live vicariously through your portfolio of companies.”

However, Caulfield says he is happy where he is now. As for down the line?

“I think by the time I’m finished in venture capital I’ll probably be too old to do a credible startup. I’ll be so out of touch,” he laughs.

Caulfield, out of touch? Very doubtful.