AFTER PUTTING MORE than €1 million of his own cash into development of his Sligo ‘glamping’ village, David McGowan is turning to crowdfunding and selling holiday homes to see the project through.

Two years ago, McGowan brought international attention to the town of Enniscrone when he shipped a Boeing 767 to the site of his proposed Quirky Nights Glamping Village.

McGowan plans to convert the aircraft, as well as a three-carriage train, helicopter, boats and old buses, into accommodation for guests on the site. The plans also include the development of a petrol station forecourt at the site.

Last December, the final piece of the project, which included plans to develop an airport-style terminal near the plane, received full planning permission from Sligo council.

McGowan, who owns a funeral home in Ballina and teaches the embalming profession at his academy, told Fora he has been “tipping away” with groundwork at the site – and that process was now 70% complete.

He said about €1.5 million has been pumped into the project so far in total – but it needs another €4 million to be “turnkey”.

“I’ve a place that will park 150 cars. We had to take out an acre of bog to put that in and put in a thousand tonnes of stone.

“The ground is all drained, the whole 18 acres, which took a bit of time. We’ve all the necessary wiring down that we’re running across the site, which took six months. We’ve the basement in for the shop and forecourt and the ground sorted too.”

McGowan added that he plans to use Irish-based peer-to-peer lending platform Flender to host a crowdfunding campaign later this year.

“Of all the people I’ve spoken to, Oli Cavanagh at Flender is the most trustworthy I’ve come across. He is very interested in helping me to raise the finance and he doesn’t want any major guarantees, he just wants to take a charge on the property. All the rest of them want the kitchen sink.” 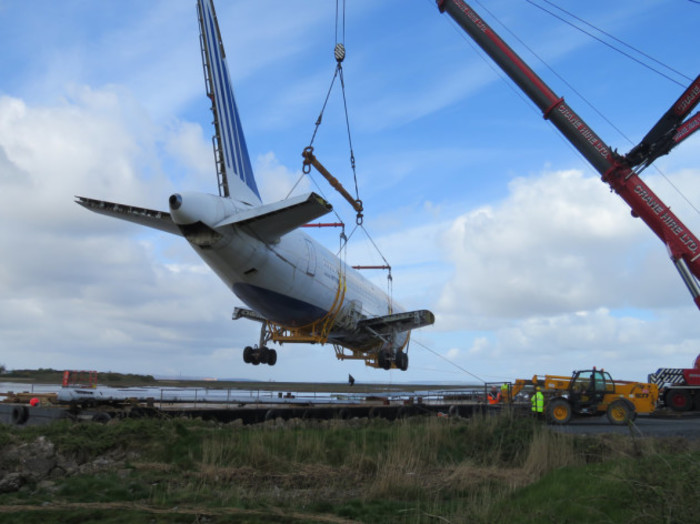 The initial crowdfunding project on Flender would be used to drum up €1 million to develop the forecourt, according to McGowan, with a second funding effort to follow for the ‘airport terminal’ building.

“With planning delays, the momentum is gone off the site, there is no doubt about it. We should had done the crowdfunding a year ago when there was a big hype,” he said.

“I still have my 70,000 likes on my Facebook page and those people are still there, but they’re asleep. I need to start building to get them awake again.”

The wait for planning permission for the forecourt project meant discussions with the big oil resellers about operating the forecourt stalled, McGowan said. He is now trying to reignite those talks.

“We’re back talking to all the people I had talked to before to see if I can get them back on the table. They all look for it for nothing. I’m going to stick tight, I’ll open it myself. I wouldn’t be afraid to run it.”

Another fundraising option McGowan is considering is the development and sale of holiday homes near the site. While there is no planning permission for the two-bedroom houses he wants to develop, the funeral director said he has designs ready to submit.

“If I was to sell the 70 of them at €69,000, it would pay for the whole development, the remaining money. I put them out as a teaser, they’re across the road from a 5km beach, and 13 of them are sold already without advertising,” he said.

“If I have to, I will do it that way. Obviously, the thing would be to build them and own them myself. But in the event of nobody coming forward, we will build them and sell them off and use the profits from that to develop the rest of the site.” 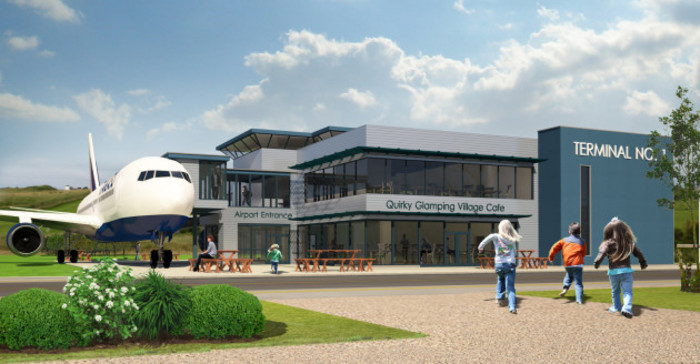 An artist's impression of the finished terminal
Source: Quirky Glamping

Plans for the ‘glamping village’ were first submitted in 2015, and McGowan said the two-year wait for approval made him consider packing in the project at times.

“When I was in Dublin to meet some people and I heard the news coming out about Apple pulling out of its plans in Athenry, I could well understand why because it’s the most soul-destroying process I’ve ever done in my life.”

McGowan has previous complained about the difficulty of attracting bank finance for projects in the west of Ireland and about the area being overlooked for State investment.

He said some lenders had told him the west was a “no go” zone – but he was determined not to give up on the project.

“Now getting the finance is a challenge, and I’ll get over it too.”