OFFICE BUILDINGS IN Dublin city centre have changed hands at an extraordinary rate over the past two years, new research has found.

According to a new report from property group Savills, almost 1 million sq m of office space was traded in Dublin between the start of 2013 and the end of the first quarter of 2016.

This is equivalent to just over a quarter of the entire office stock in Dublin. The proportion of space traded in the central business district was even higher at 38%.

Savills economist and director of research John McCartney said that although it is very difficult to predict how much trading would be carried out in an average year due to several different factors, the increase over the two-year period was extremely high.

“I would have said that something like 5% a year wouldn’t be a million miles away (from an average) for stock turnover,” he told Fora.

“It is hard to get a normal rate though because these things are cyclical, these things very much follow the interest cycle (but) for 27% to trade in 39 months is extraordinary, it’s unbelievable.”

He said that low interest rates have fuelled foreign interest in the Irish property. Large institutional investors like to put their money into secure assets, such as government bonds.

However, because central banks have kept interest rates low for years due to the financial crisis, investors were not able to make much money from bonds. This caused foreign players, such as large private equity funds, to look at more unconventional investments such as property.

As organisations such as Nama and the banks had put lots of properties with non-performing loans up for sale, there initially was a glut of supply.

“If 2011 there was no commercial property activity, then when things began to recover in 2012 and 2013 the people who took a chance were the private equity funds who were able to buy the office blocks very cheaply,” McCartney said.

Foreign buyers accounted for less than a third of spending on Dublin offices during 2013, however this doubled in the two years afterwards. 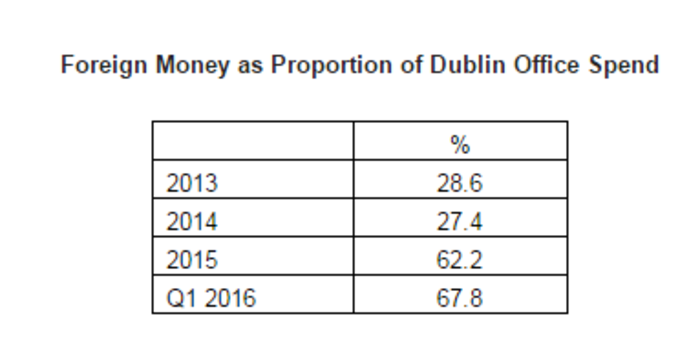 He said that the result of the high level of trading is that it will likely further increase commercial property prices.

“High levels of trading will provide market evidence of high values, which will cause people to build more office blocks,” he said. “All of the transactions create evidence that shows that the market will pay for office space so then if developers see an opportunity they will start building.”

Despite this, McCartney said that he expects the amount of vacant, city centre office blocks to stay low for the next year or two. He said this lack of supply will likely lead to further increases in the cost of rent, which already rose by about one-fifth in 2015.

“We expect prime headline office rents to increase by 14% by the end of the year, with further growth through to the end of 2018 and possibly beyond,” he said.

“We can see two years ahead for rents because anything being built for 2018 would have to be on site by now, and we know that what is on site won’t satisfy the demand out there.”

He added that although he expects the volume of trading to stay high, it is likely that the property will start to return to Irish ownership.

“There was a lot of foreign money but we’re seeing that reversing a bit, I would expect a more geographically ownership structure with more Irish money invested in the commercial property base,” he said.