A YEAR AFTER Applegreen complained that a rival’s petrol station plans near the M50 would increase traffic more than tenfold and lead to an “overprovision” of filling stations, it built its own forecourt on the site.

The firm behind the proposal is ultimately owned by Michael Cotter, one of the largest housebuilders in Ireland.

After permission was granted by the council for the filling station in December 2016, McGill Planning lodged an objection to An Bord Pleanála on behalf of Applegreen.

It argued the application was contrary to planning policy for motorway service stations and would lead to an “overprovision of petrol stations in the area”.

Applegreen added that Vecglen’s plans would increase traffic in the area more than tenfold while also failing to maximise the site’s employment potential.

Vecglen’s plans were ultimately approved after Applegreen withdrew its appeal in April 2017, however the project was never built. At the beginning of 2018, Applegreen applied for permission to build its own forecourt at the same location.

Applegreen’s planning application to build in Ballymount, prepared by planning firm John Spain Associates, said the site was a “suitable location for a petrol station” and argued against the same complaints it made to An Bord Pleanála about Vecglen proposal.

The council approved Applegreen’s larger service station last February. According to planning filings, construction commenced at the site in July and the service station has since opened. 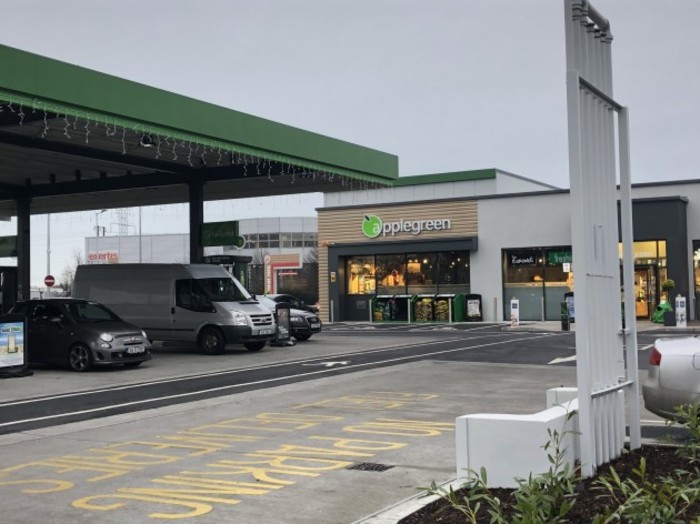 The case comes after previous Fora analysis that showed the major forecourt operators routinely use the planning system to appeal rivals’ developments, often derailing or delaying their proposals.

An industry insider previously said serial objecting is frequently used by these firms as a business tactic “in order to try and do a deal”. Applegreen had not responded to a request for comment on the Ballymount project at the time of publication.

When objecting to Vecglen’s plans, Applegreen pointed out that the site was located 350m from junction 10 on the M50, which it argued would cause a significant build-up of traffic.

“The location of the proposed facility so close to the M50 will undoubtedly attract significant numbers of motorists to divert off the mainline to avail of services,” planners for Applegreen said in 2018.

However, in its application to build on the site, Applegreen said that “existing road infrastructure can adequately cater for the proposed development”.

“The proposed development will not generate significant numbers of short local trips on the M50,” it said.

In its application, Applegreen also argued that a new forecourt was needed in the area, contradicting its earlier submission that there was “ample provision of petrol stations in the vicinity”.

“Permitting an additional station would result in a proliferation of filling stations in a relatively small area already adequately served by petrol filling stations,” its objection said in 2017.

Applegreen’s subsequent application was larger than the Vecglen proposal, spanning 672 sq m and including a convenience store, a drive-through restaurant, a café and seating area.

The new plans also included a heavy goods vehicle filling island and 76 car parking spaces, 34 more than planned by Vecglen Limited. These were reduced to 60 spaces by the council.