VODAFONE IRELAND HAS launched the country’s first commercial 5G network as the company has switched on the new generation of mobile connectivity in five cities.

Aside from offering customers faster download speeds, 5G connectivity could also support other emerging technologies such as artificial intelligence, internet of things (IoT), connected cities and self-driving cars as well as having significant implications for medical research.

Cork, Galway, Limerick, Dublin and Waterford will be first to get the new network in a catchment area covering about 300,000 people according to Debbie Power, Internet of Things country manager for Vodafone Ireland.

Over the next few weeks the locations in those cities will double and later the network will announce the roll-out of 5G to “larger towns” according to Power, ahead of a nationwide launch in 2020.

Competitors Three Ireland and Eir are also expected to launch their own 5G networks by the end of this year.

One of the advantages of 5G is that it has lower latency – the communication delay on a network – which could prove important for the application of a number of new technologies.

“It’s going to touch every vertical, no different than 4G has done for us in the past decade. We’ll see changes in healthcare in things like robotic surgery, remote healthcare, uploading images in super-fast time and without latency, which previously wouldn’t have been possible,” Power said.

“If you look at automation , you hear a lot about smart factories. When you have low-latency it allows those things to become so much more usable.”

Another key area is farming and agriculture, Power said.

“Everyone is aware that the global increase in population is by default creating huge food demands. Farmers have to do more with less, and technology will help all of that – things like automated farming, whether it’s vehicles or drones monitoring crops and harvests,” she added.

“You’ll see speeds from 150 to 200 megabits per second right up to 1 GB and that will continue to grow the more we enhance our network,” she said.

Vodafone today also announced a strategic partnership with University College Cork’s ASSERT (Application of the Science of Simulation to Education, Research and Medical Technology) Centre to make it a global centre for IoT healthcare.

The Centre will be the first 5G connected telemedicine and medical robotics training centre in the world and will enable clinicians to trial solutions using close-to real-time monitoring.

“It’s a whole new industry in relation to 5G enabling applications we don’t even know exist yet. You’ll see unusual and different business models being created over time,” she said. 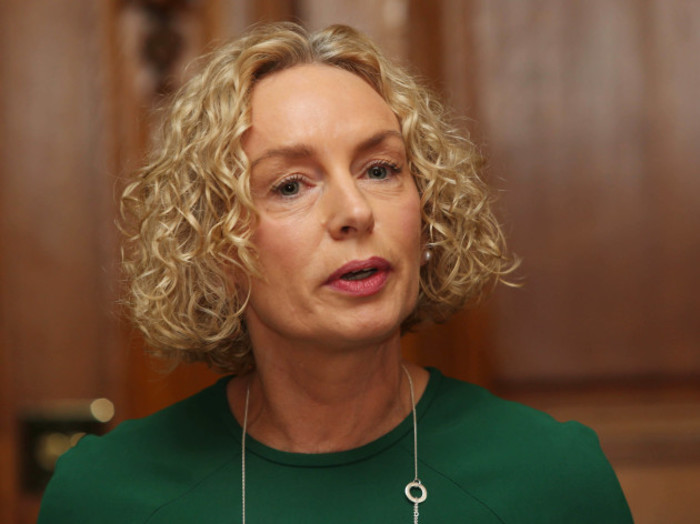 Director of ASSERT and clinical professor of obstetrics and gynaecology, Barry O’Reilly, said that 5G will “revolutionise medicine with rapid connectivity of the internet of medical things (IoMT)”.

The new technology will also enable remote diagnosis and imaging and support virtual reality applications in time-sensitive situations like strokes.

Customers will need to buy one of two available 5G compatible handsets from the operator and will need to have a 5G ready plan to connect to the new network.

The mobile operator announced last year that it would launch a 5G network this year when compatible devices were available. It also launched a 5G test network in Dublin’s Docklands ahead of a formal roll-out.

Vodafone’s RED Complete plans and RED Business plans are 5G-ready. From tomorrow customers will be able to buy the Huawei Mate 20X 5G in-store or pre-register for a Samsung Galaxy S10 5G, which is available to buy from 30 August.

The company is likely to have 5G competition in Ireland later this year. A spokesperson for Three Ireland said “we are in the process of planning our 5G rollout, which will commence later this year and continue into 2020.” Eir did not reply to a request for comment before the time of publication.