TWITTER IS PLANNING a big round of layoffs that could affect up to 8% of its staff, or 300 people, according to a Bloomberg report citing anonymous sources.

The layoffs come as the money-losing social networking company continues to struggle to grow its audience and its business, and as plans to sell the company appear to have foundered.

The job cuts could be announced this week, perhaps before its third-quarter earnings report which will be released before the market opens on Thursday, Bloomberg said.

The local operation will be headed by Storyful founder and former RTÉ journalist Mark Little, who took up the role after Stephen McIntyre stood down to join venture capital firm Frontline Ventures.

Twitter’s sales teams are expected to be first in the firing line with the job cuts as the company struggles to grow revenue, TechCrunch reported. 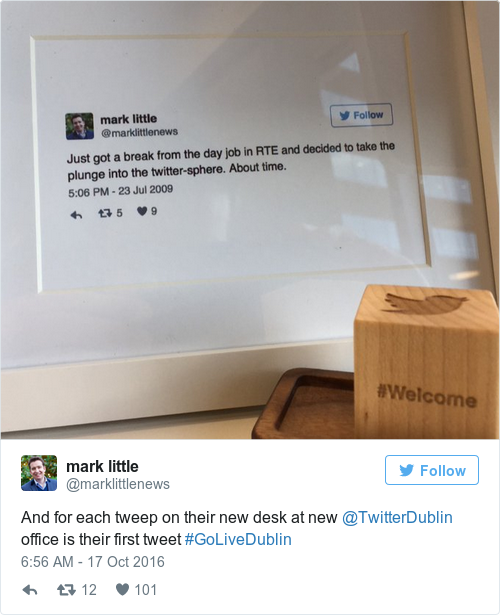 And for each tweep on their new desk at new @TwitterDublin office is their first tweet #GoLiveDublin pic.twitter.com/wYryUjFrMe

Meanwhile, Twitter CEO Jack Dorsey is increasingly under the gun. The Twitter co-founder is doing double duty as CEO of mobile payment company Square as well as Twitter, raising criticisms that the 39-year old tech entrepreneur is not able to devote sufficient time and energy to turning Twitter around.

Since taking over as Twitter CEO last year, Dorsey has already initiated one round of job cuts. But he has been unable to grow Twitter’s audience, which stalled at around 300 million users, even as larger companies like Facebook continue to amass millions of new users.

Twitter has put itself on the auction block, but, so far, no one seems to want it. Salesforce CEO Marc Benioff, who had deal talks with Twitter, said that he was forced to walk away from the deal table after his shareholders protested.

Other potential buyers, including Walt Disney and Google’s parent company Alphabet, also reportedly looked at the company and passed. The latest rumour is that Softbank is kicking the tires on an acquisition, though there doesn’t seem to be any real evidence of a deal.