THE RECEIVERS OF the Point Square shopping centre in Dublin want to turn part of the largely vacant property into a leisure destination in response to an “irrevocably changed” retail landscape.

The mostly empty shopping centre, which once formed part of a larger development spearheaded by builder Harry Crosbie, is located near the 3arena and is home to an Odeon cinema and several food and drink outlets including Starbucks and Eddie Rocket’s.

It also provides car parking space and is next door to the Gibson Hotel. It will also be neighbour to the Exo building, which will become Dublin’s highest office building once completed.

However, the Point Square’s proposed anchor tenant, Dunnes Stores, has not fitted out a planned store at the shopping centre and has been involved in a long-running legal battle with Point Village Development, the company behind the project which entered receivership in 2013.

Receivers at Grant Thornton recently applied to amalgamate and extend two units on the first floor of the Point Square centre and have sought permission from Dublin council to change the use of the outlets from retail to leisure.

According to the application, which was submitted on behalf of the receivers by planning firm Brady Shipman Martin, the potential tenant of the new space would likely provide a “typical leisure offering” such as bowling, indoor mini-golf, VR gaming or a gym.

The proposed operator is “subject to a final letting”, it said. 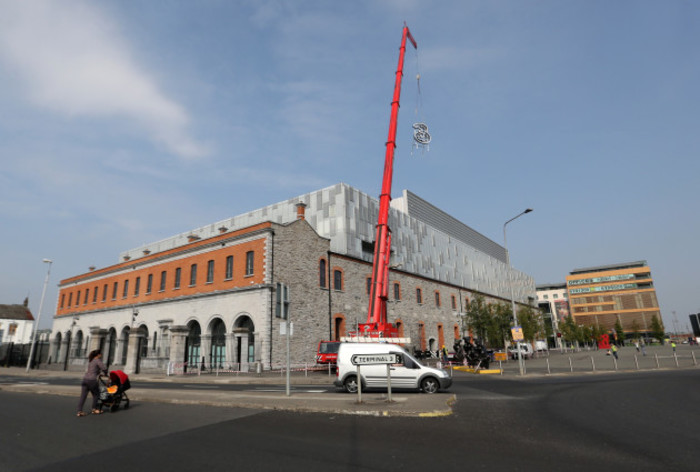 As part of its application, Grant Thornton submitted a letter from joint letting agents Savills and CBRE in support of the plan to switch the use of the units from retail to leisure.

The letter, which was signed by both Savills’ and CBRE’s retail directors, noted that the “retail market has completely and irrevocably changed” since the Point Village centre was originally developed.

In the letter, Savills and CBRE said that the Point Square as a retail destination has “fallen out of the consciousness of both the consumer and occupier market”.

“The original fashion-led target mix (at the time of the project’s launch) is no longer relevant or achievable,” it said, adding that the centre instead has the “fundamental ingredients” to provide a memorable entertainment offering.

It said that demand for units geared towards so-called ‘medium space users’ is “significantly less” than it was several years ago.

“There are effectively no desirable retailers in the market who will occupy these (medium-space units),” Savills and CBRE wrote.

It said big-box retailers that did show an interest in the units – including homewares retailers Home Store and More and The Range – ruled out moving into the shopping centre and instead opened in retail parks.

Savills and CBRE stated that retail space of the scale at Point Village would face “competition from stronger, more natural retail locations” like Henry Street, which leisure space would provide a more attractive proposition.

“It presents an opportunity which is extreme rare in the city and is attractive to leisure operators.”

Dublin council is due to make a decision on the proposed change of use of the Point Village units over the coming months.