Over the past few weeks, Fora has taken a look at some of the more notable big-ticket projects that were floated during the Celtic Tiger period – or in the aftermath of its demise.

Most recently, we detailed the story behind what could have been Ireland’s tallest building, the U2 tower. In this installment, we’ve decided to take a look at a project that was built but was never fully realised.

While the Point Village shopping centre, located just across the Liffey from where the U2 tower would have been built, did get off the ground, today it remains a ghost town. This is why.

The Point Village shopping centre was part of a larger development spearheaded by builder Harry Crosbie, who was determined to revitalise Dublin’s docks.

In 1988 there was little development in the area, most of which was in a fairly sorry state of affairs. Crosbie, a relative unknown at the time, bought an old warehouse for £1 million and promised to make it into a world-class music venue.

Crosbie followed through on his promise and over the years the newly dubbed Point Depot would host some of the music world’s biggest acts. The developer would go on to spearhead some of the city’s best-known projects, such as the Bord Gáis Energy Theatre and Vicar Street. 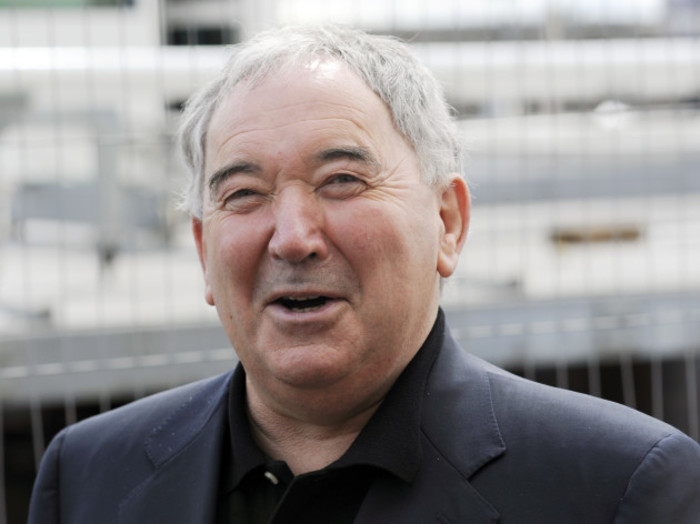 Buoyed by his success, Crosbie became ever-more ambitious and looked to get a major project close to his heart, the Point Village, off the ground.

The development at the mouth of the Liffey was intended to be a ‘city within a city’ that would feature a huge shopping centre with dozens of shops. It was also planned to include the tallest building in Dublin, the Watchtower.

It was intended that work at the Point Village, and other nearby developments such as the U2 tower, would help to “shift the centre of gravity” for Dublin further down the river.

Crosbie was trying to get the project moving for years, but it only really started to gain traction in the early 2000s.

Work on the scheme, which was estimated to cost €850 million, officially started in 2006.

The government was eager to progress work in the docklands, creating the Dublin Docklands Development Authority in 1997 and giving favourable zoning to many areas near the river.

Dunnes Stores was said to have signed on as an anchor tenant for the new shopping centre, the foundations were laid for the Watchtower and work started on building a new, four-star hotel.

Building was well under way when the economic crash came. While some of the projects, such as the Gibson Hotel, were finished, others, like the Watchtower, were swiftly abandoned when the money dried up. 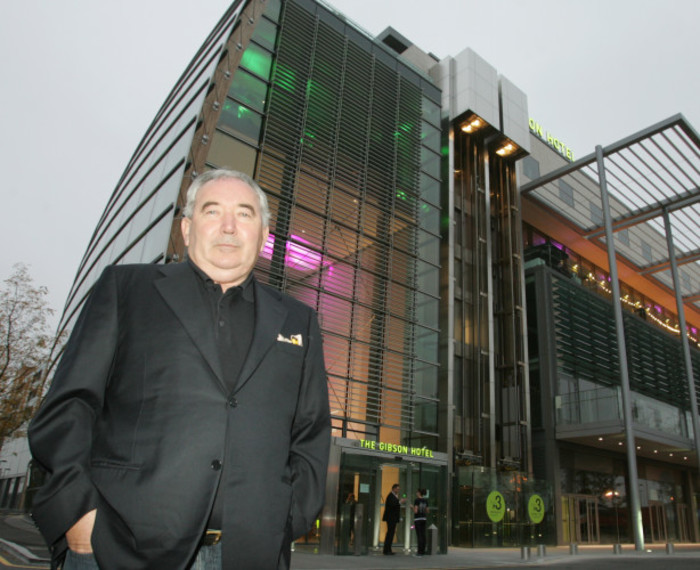 This meant that the much of the Point Village was left half-finished, and there was no sign of Dunnes Stores. Crosbie took the supermarket to court, alleging that the firm had backed out of an agreement to pay millions of euro and become the anchor tenant in the new shopping centre.

The retailer said that it was entitled to back out of the agreement after the Watchtower was left unfinished and lawyers for Dunnes said that the project was not a ”commercially realistic venture”.

The case rumbled along in the courts for years. But with no signs of Dunnes, no other stores were interested in the Point Village shopping centre either. The Irish Independent reported in 2013 that Dunnes’ withdrawal may have affected 20 other prospective tenancies.

There were a few projects aimed at attracting people into the area, such as the establishment of the Point Village market and the erection of a ‘Dublin’s Eye’ Ferris wheel, but both were short-lived and closed within a year or so of opening. 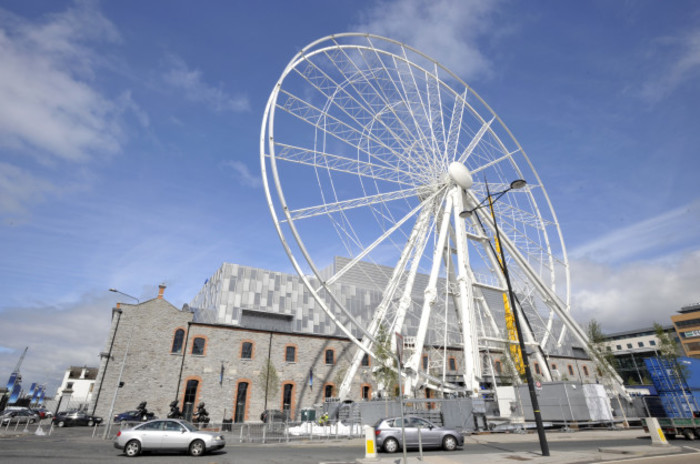 Crosbie’s loans were later transferred into Nama and the state bad bank started looking for money back from the indebted property developer, who had spent big during the boom.

Properties connected to Crosbie, such as the Bord Gáis Energy Theatre, were put up for sale, and in 2013 Nama appointed receivers to the Point Village complex. Work on the shopping centre ground to a halt and it has remained virtually deserted since.

Today, Crosbie is mostly out of the picture as far as the Point Village is concerned. Nama has pursued him in an effort to recover €77 million in debts, and the businessman is said to have agreed to have no further engagement in the legal battle with Dunnes.

However, just because Crosbie is no longer involved doesn’t mean the case is done. Last April, Dunnes was back before the commercial court with receivers for the Point Village picking up the litigation torch. 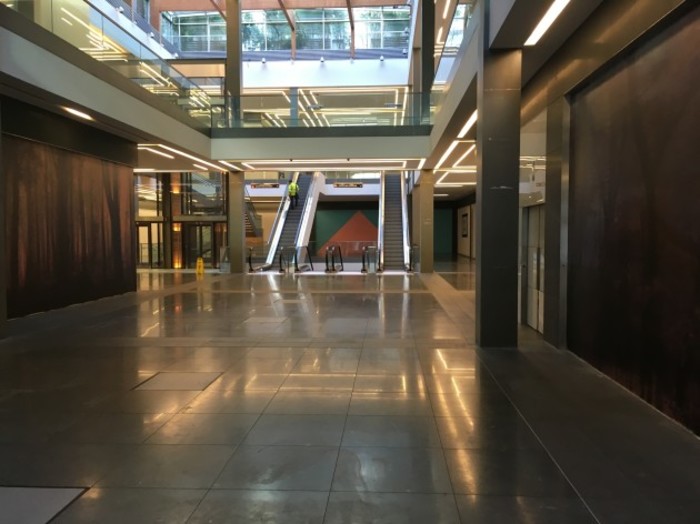 The Point Village on a Monday morning

They claim that Dunnes Stores is holding up work at the Point Village shopping centre by refusing to release €15 million it owes for development works.

The receivers said that they signed leases with nine other tenants since August 2015, fulfilling an agreement with Dunnes that seven units had to be leased before the supermarket handed over the cash for development.

However, the Sunday Times reported in April that Dunnes had criticised the other tenants and was disputing that the terms of the funding agreement had been met.

Fora contacted both Dunnes Stores and Grant Thornton, the receivers to the Point Village, however neither had responded to a request for comment at the time of publication. 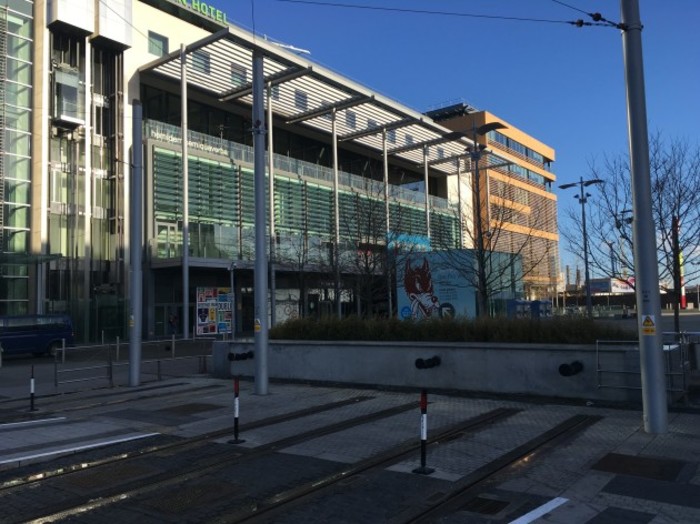 Outside shot of the Point Village shopping centre

Meanwhile, development near the Point Village is picking up after the barren years of the recession. While not much has happened since the Odeon cinema was set up in 2012, a Starbucks recently opened its doors in the shopping centre.

Planning permission for what will be Dublin’s tallest office building was recently granted nearby, although the structure will be just over half as tall as the proposed Watchtower, the foundations of which it will fill.

Cork developer Michael O’Flynn also recently got planning permission to build a student accommodation complex that will house 7,000 beds right next to the Point Village, while a host of nearby office blocks have either recently been built or are in construction.

Although it’s still largely a ghost town at the moment, in the coming years perhaps the Point Village will finally fulfill some of its potential.