A PLAN TO develop a traffic-free ‘civic space’ in Dublin city centre has been stalled until there is more clarity on the future of the proposed Metro North project.

In response to a query from Fora, Dublin City Council has said a plan to build a pedestrianised space where Grafton Street meets St Stephen’s Green won’t progress until there is more certainty on the long-overdue rail system.

Work on the €2.4 billion metro rail link between Dublin Airport and the city centre is due to begin in 2021 for completion in 2026. It includes a proposed stop at St Stephen’s Green, where passengers would be connected with Luas services.

Over three years ago, Dublin City Council published a public realm plan for ‘Grafton Street Quarter’, which featured a number of proposals to revamp the busy shopping district.

Other elements of the plan have been completed, such as the refurbishment of Grafton Street, the capital’s premier retail strip.

At the time, the council said the uncertainty surrounding Metro North and Luas Cross City, which has since been completed, would “allow the design possibilities for a car-free space to be trialled” in the area.

It said that the proposed civic space, which includes outdoor café space, would “invite pausing and meeting … without compromising the future rail project programmes”. 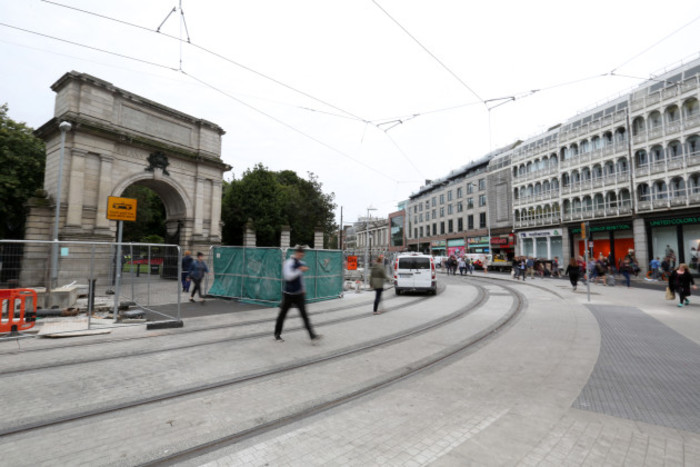 However, Dublin City Council has now said that the project will be shelved until there is more clarity on Metro North’s future.

“It is still the intention of Dublin City Council to bring forward a plan to pedestrianise this area,” a spokeswoman told Fora through a statement.

However, she added: “The reactivation of the Metro North project and the current uncertainty about its requirements in this area has meant that Dublin City Council have not been able to bring forward any plans in this area.

“When the design of the Metro North becomes clear and what its impact on this part of Stephen’s Green will be, then this can be revisited.”

The spokeswoman said the civic space is the only such project that has been delayed by the planned Metro North project.

As previously explained by Fora, Metro North has been delayed for over a decade. In 2015 the project was resurrected although amended slightly so that it would be a mix of underground and above-ground lines.

It is envisaged that the line would carry 30 million passengers a year, cost €2.4 billion to build and carry passengers from Dublin’s O’Connell Street to the airport in 19 minutes.