ALAN SMEATON HAS been tracking his sleep habits for almost a decade. Over the past few years, however, he has noticed that he isn’t alone.

The founding director of the Insight Centre for Data Analytics and Professor of Computing at DCU, Smeaton said the gold-standard for figuring out the quality of your slumber is a sleep lab.

But there are not too many people who are connected to “more sensors than in intensive care” for heart rate variability, oxygen saturation and even an electroencephalogram – which monitors the brain’s electrical activity.

As the public has more sleepless nights worrying about having sleepless nights, at-home consumer solutions, which have the benefit of being non-invasive, have gone mainstream.

People can choose between apps such as SleepScore and Pillow, wearables like the Apple Watch, FitBit and Withings and bed-side devices. Smaller wearables such as the Oura ring are also growing in popularity.

Sleep deprivation, at this point, is being considered a global epidemic. So, if a sleep lab is the gold standard, is the consumer commodification of our anxiety to get a good night’s rest a bit of a fad?

According to DCU’s Smeaton, “absolutely not”.

Our society has changed dramatically in the last 200 years, he said, adding that “we’ve been ignoring sleep for the last hundred years.”

Despite the strides we’ve made in technology, industry and an ever-increasing life-span, we seem to have lost out on is sleep length and quality.

We’re all sleep deprived, he said and until recently we “didn’t know and we didn’t care”.

Rather than a fad, he said, it’s “a realisation, because we can now measure it. You can’t change something until you can measure it and we’re only now getting to the stage where we can measure it”.

Most people are well aware of the damage a bad night sleep can do to energy levels and mood, but the issue could be a lot more serious. There is increasing research linking sleep-deprivation with diseases like Alzheimer’s, heart disease and diabetes, as well as weight gain and mental health issues like depression and anxiety.

For Irish entrepreneurs, the problem presents an opportunity to come up with the best solution.

ResMed, which is behind the fast-growing SleepScore, has had a presence in Ireland for the last few years and is headquartered in California.

On our side of the Atlantic however, the sleep tech industry is still in the early stages, but according to SleepScore CEO and Dubliner Colin Lawlor, Ireland is well placed in the burgeoning sector due to our tech talent. 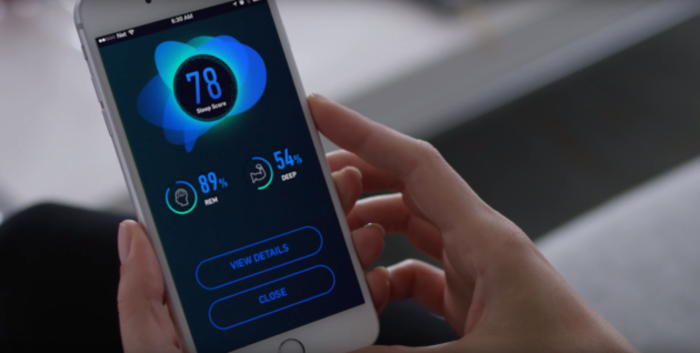 (Not quite) X-Ray specs

In 2017, the same year as Matthew Walker’s bestselling book Why We Sleep was published, two researchers won the Nobel Prize in physiology or medicine for their discovery of the gene for circadian rhythm – or the “body clock”.

When sleep science started to hit the mainstream, Damien Kilgannon and his business partner, Mark Caughlan, shelved their startup focused on childhood myopia and switched to the area of sleep deprivation.

“At that time there was the beginnings of lots of talk about sleep and sleep loss. The product we were developing was a pair of glasses and we said, let’s try and pivot this into the sleep space,” Kilgannon said.

“That brought us into another domain, looking at light therapy to adjust people’s body clocks.”

The company, Sula, makes glasses which filter blue light and use in-built light therapy to adjust the wearer’s circadian rhythms – that’s how our body adjusts to night and day through stimuli like light reception.

Depending on individual needs, using them for about 30 minutes in the morning can do the trick, if you get up when it’s dark. The product is particularly aimed at those suffering from jet lag, shift workers and “social jet lag” – where you get up early on weekdays and sleep in on weekends.

Kilgannon and Caughlan are both engineers, and the latter also has a PhD in eye research.

“We’re engineers and we were interested in technology and in how you apply technology to improve people’s quality of life,” Kilgannon said.

“A lot of the treatments that exist for sleep loss and sleep disorders are medication. A lot of people don’t want to use medication because of the side-effects,” he added.

“Less than 100 years ago people used to get up when the sun rose…then they went to sleep when the sun went down. (Now), we come home from work, we watch TV, we have LED lights in our house, don’t feel tired and stay up until 10 or 11.”

But you can’t tell people not to use phones or watch TV, Kilgannon said.

“With our product, we’re taking advantage of technology and using it to fix a problem that technology caused.”

Right now, the company is raising a seed funding round to take its product to market.

In a recent interview with Fora, SleepScore CEO Colin Lawlor said that there’s “a tremendous pool of talent” in Dublin when it comes to developing the data science end of the company’s development.

According to the company’s latest data from its Irish users of the SleepScore app, we sleep on average just 6.15 hours a night, which is almost two hours below the recommended 7.5 to 8 hours.

Though the hardware version of its product, the SleepScore Max, isn’t available here yet, the technology for it was developed in UCD and was originally under a company called Bianca Med, which was acquired by ResMed.

It’s “Irish technology through and through” according to Lawlor.

Belfast based company Neurovalens has also had a hand in taking sleep-tech global with their brainstem stimulating headgear, which aims to solve a host of health challenges like diabetes, anxiety, obesity and insomnia.

The company makes two products, the Modius SLIM and the Modius SLEEP and has patents in the US, EU, China and Canada.

With a global sleep market is worth about $75 billion, according to Sleepscore’s Lawlor, and spanning everything from mattresses to wearables and lavender pillow spray, Irish companies have plenty of market to fight for.