I’M IN FINAL year of college finishing up a business and law degree, and although it might seem like an unlikely time to set up a business, it’s probably a perfect storm for a startup.

This past September, I set up my own crisp company, O’Kale Krisps, and have found there are so many people in college who are young ambitious and desperate to get experience, which is ideal for any startup that isn’t flush with resources.

For example, you have graphic designers that need to do stuff for a portfolio and are ‘time rich’ at the minute.

A few weeks ago, I met someone from NCAD who has just finished up a graphic design course and they are willing to share with me what they know about design and branding of a product.

In a year or two, when they are out of college and have some experience under their belt, I’d be paying them top-level consultancy fees to learn what they know. 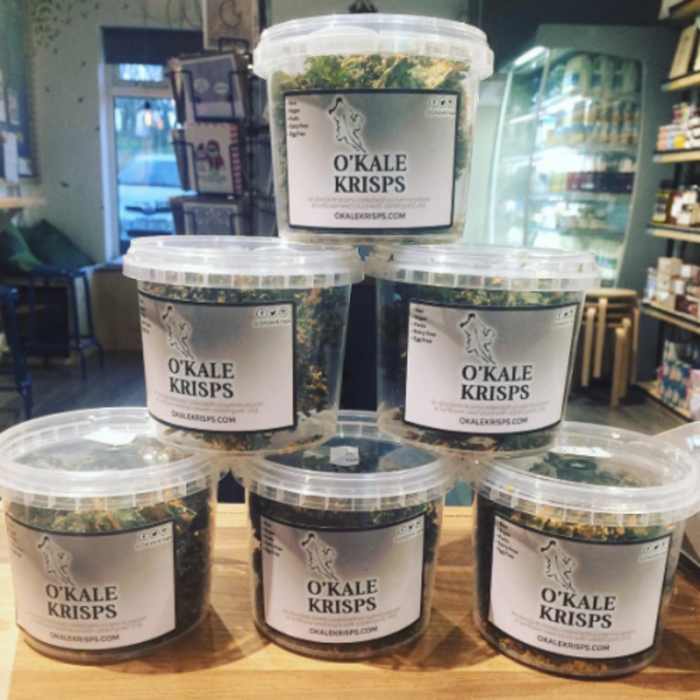 Running a business is what I have always wanted to do, to be honest. The way I describe this year of college is I’m tying up a few loose ends in UCD – it’s just about getting it done.

It just feels like you’re playing a different game. When you’re hanging around between lectures and everyone is drinking coffee, the chat is all about this and that graduate job. The grad jobs never appealed to me.

If this goes belly up, I think I would probably end up working in a shop part-time as I tried to get another business off the ground.

Before O’Kale Krisps, I had started an online student publication with a group of friends called StudentB8.

The idea was instead of every college having their individual publication, this was going to be a one-stop shop to student opinions, and we had writers from every college in Ireland writing for us.

It was a learning curve for us and we never made any money from it, but it taught me a lot about managing people and motivating them when we had very little to offer them financially.

We wrapped that up and I remember thinking to myself that the next thing I started was going to be something I could physically sell.

I honestly have no idea what got me so interested in business and it’s one of most popular conversations at home: “Why does Jack want to start a business?”

Neither of my parents are big into entrepreneurship, but since I was as young as I can remember, the goal has been to start my own business and not to work for anyone else. 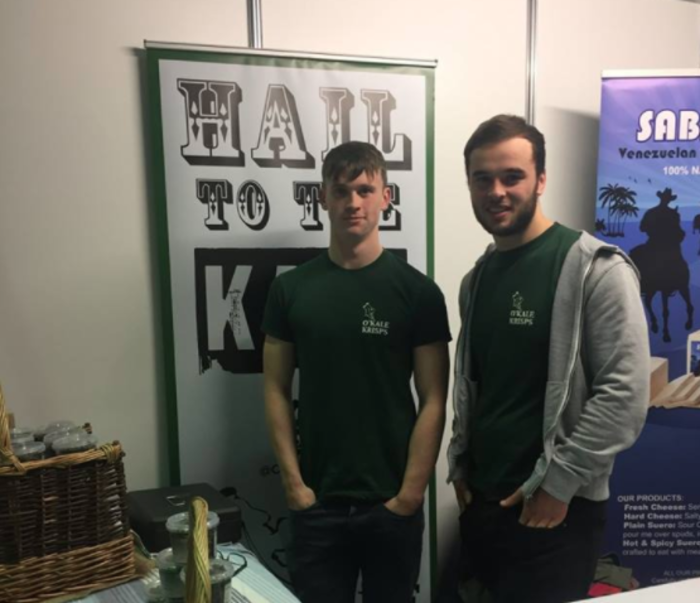 I was always into buying things and then selling them on for a higher price – ‘flipping’ as they call it. I even did it with stuff at home. I would see stuff lying idle at home that my mother had bought and all of a sudden it would have been gone because I sold it on DoneDeal.

I think it’s the way I’m wired to do that sort of stuff. I would always ask for forgiveness, not permission. I also used to sell small stuff in school.

We would go to the shop during our break and I would buy a multi-pack of chocolate bars and sell them on so I would get a free lunch out of it.

My mother also used to be into art. She used to do paintings on rocks and I would go door to door when I was eight or nine years old trying to sell them.

I remember thinking this was the best business model ever because I had the free labour of my mother who was making them, and all I had to do was go to the neighbours.

I never thought anything of it until I started getting into college and seeing that this is the way I want to go. I wanted to be selling stuff.

O’Kale Krisps all came about from my own fascination with kale crisps while I was on my J1 in the US during the summer. I loved them and after work I would always head into Wholefoods and get a packet.

My younger sister Sally had started a similar business that sells crisps made of kale years ago, but it didn’t work out. She won a local entrepreneur competition but was only in first year of secondary school.

While I was on my J1, I just started seeing kale crisps everywhere in the US, and I found that nothing they had over there was as nice as what she had previously made. I thought there was no reason why this couldn’t take off in Ireland.

So I decided, why not give it a go. Kale grows so easily in Ireland, which meant that I would be easily able to get my hands on it, and also it’s a very nutritious snack, so I thought there is definitely a market for this at home.

Once I came back from America at the start of September, I had the company set up by the end of the month. There was no real messing around.

I launched the product at an event called Huddle Dublin in September. That all came about because I was selling tickets for the event to help out a friend and they had one free exhibition stall that they couldn’t fill. So I said I would work for free if they would give me the stand.

Whether it’s right or wrong, there was no planning phase in reality – we just launched the product and did a sampling to get some feedback on what people liked.

So there was a trial and error for a bit with the flavours, but once we nailed one that people liked, we stuck with it and so far it has done really well. 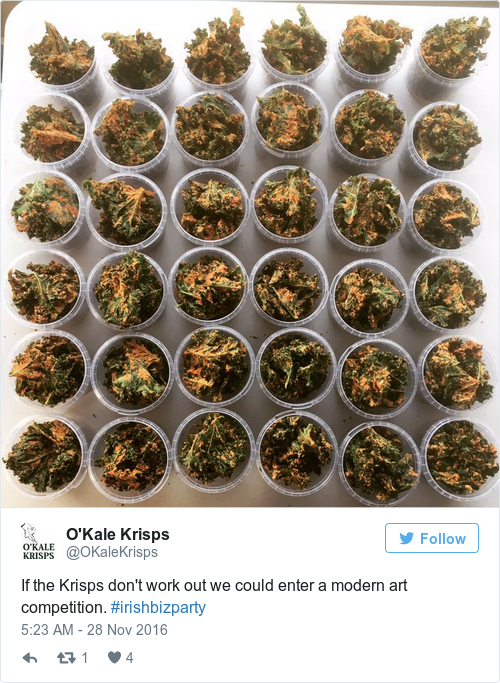 If the Krisps don't work out we could enter a modern art competition. #irishbizparty pic.twitter.com/IGMkoWlW9k

It sounds like a cliché and typical business speak, but once you have a good product, in our case a tasty product, everything else falls into place.

Once we launched, we went back and set up all the manufacturing, which is all done locally using some dehydration machines to manufacture the crisps which we already had from the time my sister was making them.

We’re also lucky that I live right next door to Beechlawn Organic Farm, which means we can source the best ingredients from just down the road.

Since I jumped in head first, the packaging is pretty primitive, so looking back it would have been nice to spend some time making that look a bit nicer, but at the same time, done is better than perfect.

You can get stuck in the analysis paralysis phase of planning, planning, planning. But at least if you’re in shops you’re able you have the wheels of the business turning and can do something with the customer feedback, whether it’s positive or negative.

We’re in a great place right now as a company because we’re getting messages from shops that they want to take them. It’s a great problem to have.

I have a plan in place now where we’re going to sell in Galway shops for the first four to six months of this year, then expand to Dublin.

I’m splitting my time 50:50 between work and college right now and it’s just me at the minute producing the crisps mainly at the weekends.

Hopefully we’ll get to the stage soon where I can hire one or two full-time staff to work on it with me, and then we may need to look at building a dehydration room instead of using our current machinery. But that’s probably 12 or 18 months down the line.

Even if this doesn’t work out, setting up the business has given me the confidence that I can do it. It’s not a superpower, anyone can sell something.

Jack Parsons is the ‎founder of O’Kale Krisps. This article was written in conversation with Killian Woods as part of a series on unlikely entrepreneurs.