IN ONE OF the most popular talks from the TED stage, social psychologist Amy Cuddy espouses the scientific virtues of “power poses”.

The 2012 talk has been viewed 52 million times, is the second-most viewed TED talk ever and has spawned two best-selling books.

Unfortunately, the science doesn’t hold up to intense scrutiny. When the test used in the original study on power posing was replicated by independent experts, using a larger sample size, they found that power poses don’t actually work.

Another classic piece of social science that’s misinterpreted to provide a quick sugar pill for people looking to improve their confidence or performance is the Mehrabian Theory.

The theory goes that 7% of what people take in from a presentation or interaction is what was said, the other 93% comes from a combination of facial expressions and body language.

However, that’s not what the study found. What it actually said was that when facial expressions and body language contrast with what is being said, we tend to give the former more credence, which is common sense. If someone is glaring at you but saying everything is perfect, it makes sense to put more stock in the facial expression.

Nonetheless, the study has been taken to mean that body language is all that matters and that content is a secondary concern. In reality, it’s the other way around: good body language flows from confidence in your content.

Unconfident or nervous body language is always a symptom, never the root cause. When you attempt to treat a symptom but ignore the cause, you’ll never fix the underlying issue.

In my work preparing people for job interviews, presentations and pitches I come up against this type of bad advice all the time.

It has to be debunked because it gives people a belief in easy fixes for complex problems and convinces them that they don’t need to do the hard work that will make a real and lasting difference.

The advice that will actually help you overcome nerves and anxiety for your next presentation or interview isn’t that sexy. It’s not as simple as just focusing on how you sit, stand or smile, but it is effective.

The approach should always be to cover less, but say more about it. Never ask how long should a presentation or answer be, ask what do I need my audience to remember?

Identify the two or three key points you need to address, and spend your time illustrating those points.

Being concise and to the point is a difficult skill to master, but it’s one that will make any communication more effective and easier to deliver. It means you’ve worked out what it is you need to say and the most efficient way to say it. Once you work this out, your delivery will flow.

Don’t try to ‘present’ or ‘perform’

The more conversational and natural your delivery, the more effective your communication.

We all have comfortable and relaxed, and therefore powerful, body language in some situation. It might be in a one-on-one meeting with your team or an encounter with colleagues at your own level. Identify where you are at your best and work towards replicating that when under pressure.

For an example of what happens when you focus on standing a certain way, look no further than the UK Conservative party. They are clearly fans of the power pose.

If you google “Conservative Party Power Stance” you’ll see plenty of examples of their senior members striking a pose. They all look uncomfortable and unnatural. 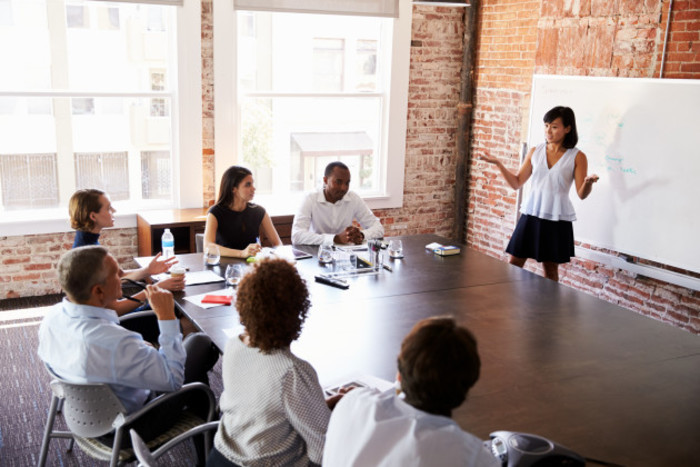 Finally, practice beforehand. It’s screamingly obvious good advice but it’s often ignored. Usually it’s ignored in favour of running through the presentation in your head or preparing your slide deck.

A presentation or interview is a verbal interaction. It needs verbal practice. The only way to get more comfortable in presenting material is to become more familiar with it and the only way to do that is to practice.

Bill Clinton, one of the most revered communicators of the past few decades, was famous for the amount of verbal preparation he put in before debates and campaign events.

Before Democratic and Presidential debates he would spend the preceding two weeks going through two full debates a day with staff to help himself appear as his genuine self under pressure on stage.

What worked for Clinton’s Presidential debates will work for your next presentation, interview or pitch.

The key to developing strong, confident body language is to develop earned confidence. The only way to do that is to work out what you want to say and practice saying it.

As with most things in the business world, it’s about preparing, not posing.

Lorcan Nyhan is a senior consultant and the head of careers at The Communications Clinic.