I ORIGINALLY SET up my business in 1999 and it was all sort of by chance. I had just started working for a fruit grower after I finished studying horticulture in college and was helping him manage an orchard in north county Dublin.

When I started the job there wasn’t any contract, so I had no idea how long it was going to last for. Within a few months the manager of the fruit business asked if I would continue a lease that he had on a smaller neighbouring orchard.

It was a few miles from his main orchard and it was just inconvenient for him to look after it. He asked me to do him a favour because he didn’t want to let down the guys he was renting it from, but also didn’t want to continue it himself.

So, I took a five-year lease on this plot because I thought this might be a bit of fun to do on the side while I’m still working for him.

I had no experience in business and it certainly wasn’t my intention to set up on my own. The very thought of that totally scared me and I wouldn’t have thought I was capable of it. The reason I was spurred on to do it was to have something to fall back on if the work wound up at my other job at the big fruit farm.

As it turned out, I was lucky to have the lease, because the fruit grower’s own business was in a bit of trouble and went down the tubes over the next year or so. So, I fell back on the small orchard as my livelihood.

But by that stage I had gotten my first batch of apples from the orchard and made some apple juice to sell, and I had started to experiment with making cider. I also caught a break by getting a spot to pitch up at the Temple Bar Market.

Those farmers markets are a really big part of my business. The reality is that at least half of my sales and turnover would be direct sales at those markets and since getting a spot in the Temple Bar one, I also got space at the Honest to Goodness market in Glasnevin and the Sunday market in Dun Laoghaire. 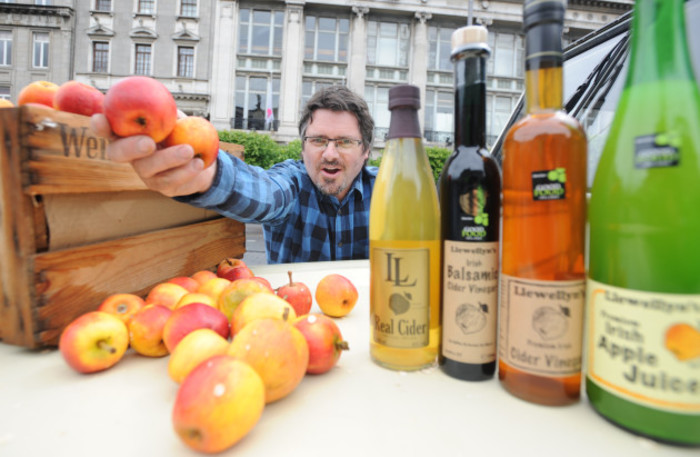 It has been a very unusual set of circumstances that I fell into. Farming isn’t something you can just decide to do. You can do a course and be qualified, but you can’t just say, ‘I think I’d like to farm’ because first you have to own one.

Unless you are inheriting land, it’s very hard to get into the farming business because you can’t rent land in this country long-term. To have any stability for a business like mine, you have to own land, which was a problem because I had set up a business on 15 acres of orchard I was renting.

Since the lease was going to expire in a couple of years and it was apparent that I wouldn’t be able to renew it, I was in a bit of a predicament because I had nowhere to go, no land, no premises, no house or anything.

Literally the rug was being pulled out from underneath me so I had to think of a way to keep the business going. As it turned out, in 2002 I got a chance to buy three acres of land near the original orchard.

That was a sheer stroke of luck that we could buy that land in north county Dublin, which normally you wouldn’t find if you went looking for it or it would be too expensive.

As I planned for the big move, I was able to keep the first orchard going for the remaining two years of the lease.

At the new orchard though, I literally had to start from scratch and planted new trees which I had been nursing for a couple of years in preparation for the move.

We also set up a little cabin on the field to live in while we were still making planning permission applications to build a house on the land. We went in thinking that, worst-case scenario, we might end up in the cabin for two years, but we ended up there for five years until we eventually got permission to build.

Even though there were tough time when we were setting up the new orchard, I never thought the business would fold. I was always thought somehow I’ll make this work and I didn’t have a plan B, so it nearly had to work.

At that time, I was just delighted to get my own land, which gave the business a bit of security and since then things have worked out and I’ve continually looked at what new products I could develop from cider to wine and even vinegar. 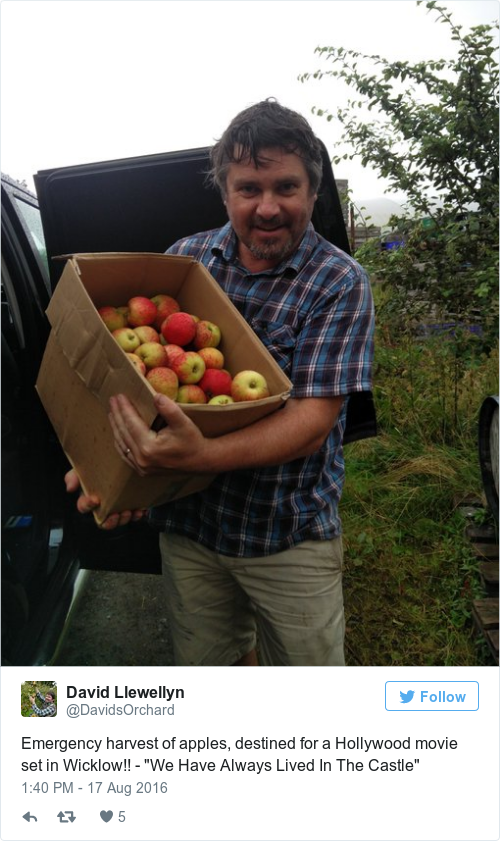 Emergency harvest of apples, destined for a Hollywood movie set in Wicklow!! - "We Have Always Lived In The Castle" pic.twitter.com/gQpZr66t1x

As I developed new products over the years, I also looked to get into bigger shops and on more shelves.

I started by just approaching small shops, greengrocers and delis to see if they were interested in selling the apple juice. Back when I was starting out, fresh apple juice wasn’t something general consumers were familiar with, which meant it was easy for me to generate interest in it.

I moved into wine- and cider-making as well because it was always something I had a fascination with. It was also a bugbear of mine, at the time, that in Ireland you could not buy proper cider, you could only get Bulmers – which is like an alcopop.

So I decided to make a craft cider to fill a hole in the market and started selling it as what I called at the time, ‘Ireland’s only real cider’.

The products that I make are, by nature, not the kind of ones the dragons in Dragons’ Den want to see. They are expensive to produce and it is very difficult to make margins on them, which means you have to be clever about who you provide to.

While wholesaling the products, I’ve also found getting a decent margin is difficult. In my experience, it isn’t the sort of product that lends itself to that kind of a middleman or distributor structure. It would end up too expensive on the shop shelf and no one would buy it.

When I got Superquinn to agree to take the products off me, I had to supply it to them at a cheaper price than my regular wholesalers. I took that hit because, at the time, Superquinn was the respected supermarket chain and to have a product on its shelves looked good for the company.

Supplying Superquinn turned out to be my biggest mistake over the years. I only ended up losing money due to the low price that I had to supply to them at and then lost big when they went into receivership.

In the end, what I lost in Superquinn virtually wiped out any profit I had made off them over the years.

Looking back now, I would have been better sticking with a smaller production and supplying smaller independents because basically I was chasing my tail. And as a one-man show, I can’t afford take on too much of a workload like supplying a big chain, for relatively little.

David Llewellyn is the ‎owner of Llewellyns Orchard. This article was written in conversation with Killian Woods as part of a series on business mistakes and what can be learned from them.