THE GROUP BEHIND bakery chain Patisserie Valerie may be on the verge of collapse following the discovery of a significant hole in its balance sheet – and the arrest of its finance chief.

The firm added that it needed “an immediate injection of capital” to continue trading and suspended trading in its shares.

Patisserie Valerie, which has nearly 3,000 staff, operates around 200 cafés and bakeries across the UK.

In recent years, the brand has expanded to the Republic and opened its first outlet in a Debenhams store in Blanchardstown last May.

Three months after the initial launch, Patisserie Valerie opened a second café in the Debenhams outlet on Henry Street in Dublin city centre.

Following the expansion to the Irish market, Patisserie Holdings told the stock market last year that its Republic outlets had performed ahead of expectations.

Filings published by the company showed that the two Irish cafés took in combined revenue of £361,000 to the end of September 2017. 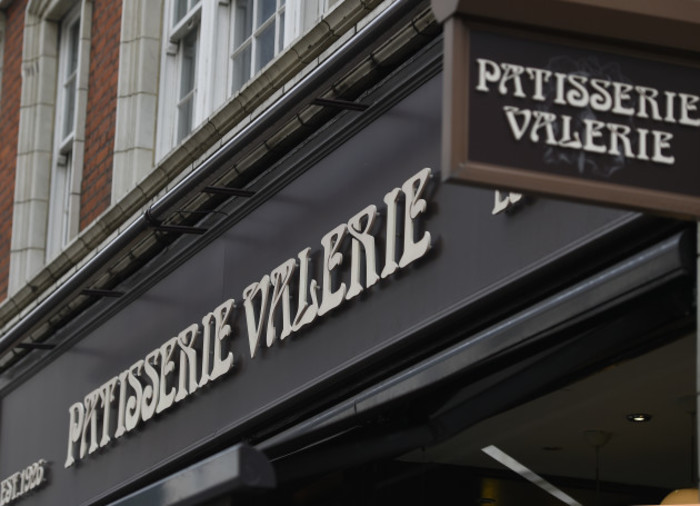 The group behind Patisserie Valerie is co-owned by Luke Johnson, who is the executive chairman of the firm he bought in 2006. Before the scandal emerged, the firm was valued at roughly £450 million on the stock exchange.

Johnson holds just over a third of Patisserie Holdings’ shares. He previously owned Pizza Express, which trades as Milano in Ireland, and the firm that operates The Ivy restaurant chain.

Following recent updates from the crisis-hit company, another market notice flagged that the firm’s finance director has been arrested.

The statement read: “Chris Marsh, who is currently suspended from his role as company finance director, was arrested by the police last night and has been released on bail.”

Marsh was suspended from his role by the company on Tuesday when the irregularities in the group’s finances first surfaced.

The company has also announced that tax authorities have petitioned to wind it up Stonebeach Limited, Patisserie Valerie’s main trading company.

The petition is related to a bill in excess of £1 million due to the tax authority. The case is due before the court on 31 October if the issue isn’t resolved.

The board of the company said it was unaware of the HM Revenue and Customs petition, which was filed in mid-September, until this week.

After the firm suspended trading in its shares, Patisserie Holdings said it would conduct an investigation to get a better picture of “its true financial position”.

In another stock market update posted today, the group’s directors said that their investigation showed that the company required an immediate cash injection of no less than £20 million.

They added that without this capital, the group could not continue trading and would need to appoint administrators.

The directors confirmed that statements on the firm’s cash position have been “mis-stated and subject to fraudulent activity” and that the group has net debt of around £9.8 million.

In a move to stabilise bakery chain, they proposed the firm should attempt to raise approximately £15 million through the issue of new shares.

They added that in order to provide immediate liquidity, the firm is expected to enter into a £10 million loan agreement with Johnson. The loan from its executive chairman is for a three-year period and will be issued on an interest-free basis.

Johnson will also commit a further a short-term loan of up to £10 million to provide the company with the ability to fund immediate outstanding liabilities. This loan will be repaid when the company issues new shares.

The directors said that net proceeds of the placing and the loans would be used to to pay amounts owed to the tax authority, trade creditors, general working capital purposes and committed capital expenditure.

“Based on the current information available to them, the directors believe that upon completion of this equity and debt fundraising, the group will be able to continue trading in its current form for the foreseeable future,” the directors said,

Patisserie Valerie’s creditors still have the power request the firm is wound up through an application to court.

Update: This piece has been amended to include information from a stock market update posted after the publication of the article.