Most recently, we detailed the story behind the plans to build an enormous Disneyland-style theme park in the small north Dublin village of Lusk.

The plan was met with incredulity by local councillors and planners, who said that the park would be impossible to accommodate in Ireland as a whole, let alone Lusk.

In this instalment, we’re moving to the capital’s commuter belt to take a look at a different beast – a white elephant in Kildare.

The long-planned Naas shopping centre has been lying derelict for years despite retailers crying out for something to regenerate the town’s high streets.

Shopping centres were popping up all over the country during the boom. One that was particularly noteworthy was Whitewater Shopping Centre in Newbridge, which opened in 2006 and was the largest shopping centre in the country outside of Dublin. 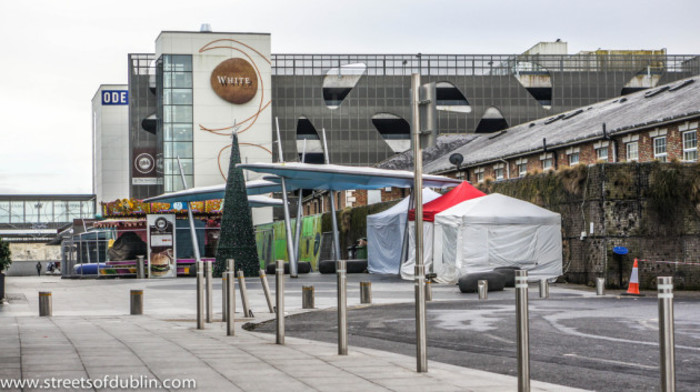 A development plan drawn up by the local council had aimed to make Naas a key retail hub, but officials were conscious that shoppers were likely being drawn to Newbridge and Whitewater – only 12km away – at the expense of their town.

Naas already had a small shopping centre, the Naas Town Centre, but it was hoped that the new and larger development would help the town compete with Newbridge’s growth.

The property was to be developed at a site at St Corban’s car park, in the heart of the town, at an estimated cost of €45 million.

It was to have 43 retail units spread over two levels alongside almost 750 car parking spaces, and it was expected to support 350 jobs when completed.

The centre was being developed by a firm called Marshalsea Property Company, owned by Liam O’Farrell and the McDermott family, which was also involved in work at Dublin’s Merchant’s Quay.

There was aspirational talk as far back as the 90s of building a large shopping centre in Naas, however plans started to become firm around 2005.

Work on the site started in April 2007 and was due to be completed in 2009. The Kildare Nationalist reported that Marshalsea held a meeting with locals in December 2008, when it was confirmed that Dunnes Stores was to be the anchor tenant for the centre. 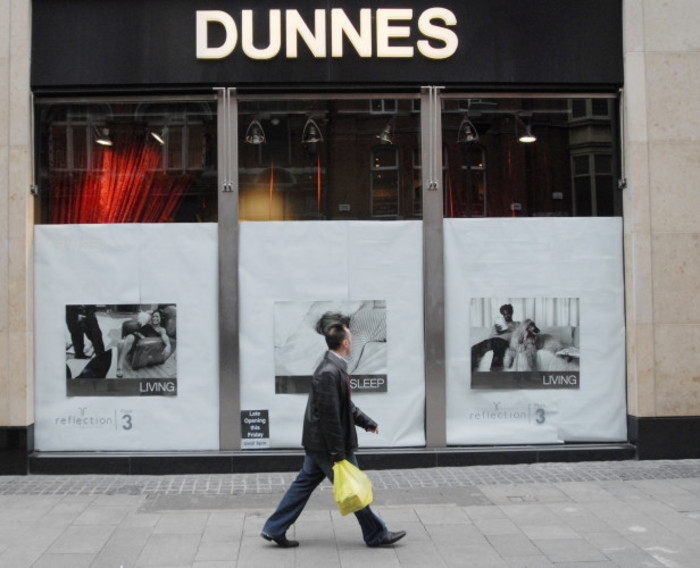 The paper reported O’Farrell as saying that several companies were close to signing deals to set up in the shopping centre with tenants to be confirmed in the new year.

However, work was halted at the site in 2010 amid the economic downturn, and the opening date was pushed back until at least 2012.

Most of the basic construction was done, with just some work such as the fitting out of shop units to be completed, however there was a problem with Dunnes Stores.

The Sunday Business Post reported that Marshalsea took legal action against the company after the supermarket tried to change the terms of its lease, and the Kildare Nationalist said in 2011 that Dunnes had pulled out of the project altogether.

The Naas shopping centre has been left unfinished in the centre of the town, with the cranes still at the site, since the recession. 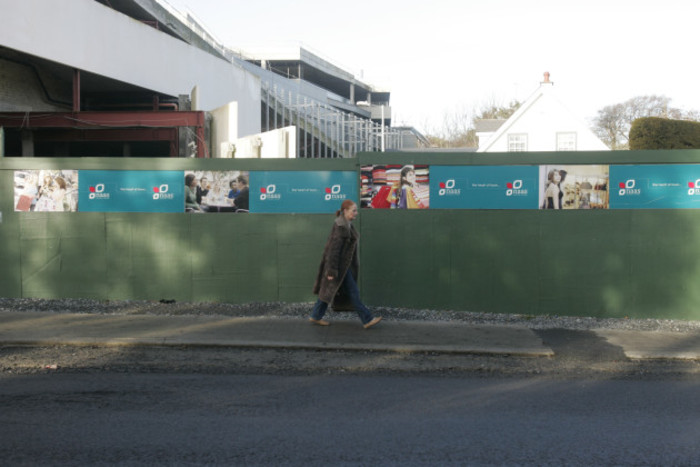 It has since been reported that further work on the shopping centre has been delayed because the local council is attempting to purchase a parcel of land at the site, which has resulted in a long arbitration process.

The Leinster Leader reported that land at issue “is tiny; a fraction of an acre and is so small that it hardly represents a serious obstacle to the opening of the centre”.

Kildare County Council had not responded to questions regarding the land at the time of publication.

Control of the loans attached to the centre was transferred to Nama, which is said to be looking for a buyer for the property. In February, Kildare County Council told Fora’s sister site TheJournal.ie that a decision in regards to the sale of the site was “imminent”.

However, Nama has been reported to be in talks with people interested in buying the centre since 2015.

In the meantime, retailers in Naas say the town is suffering. Several centrally located shops, such as the former Superquinn outlet on Main Street, have closed over the last few years and many consumers have been drawn both to shops on the edge of the town or in Newbridge. 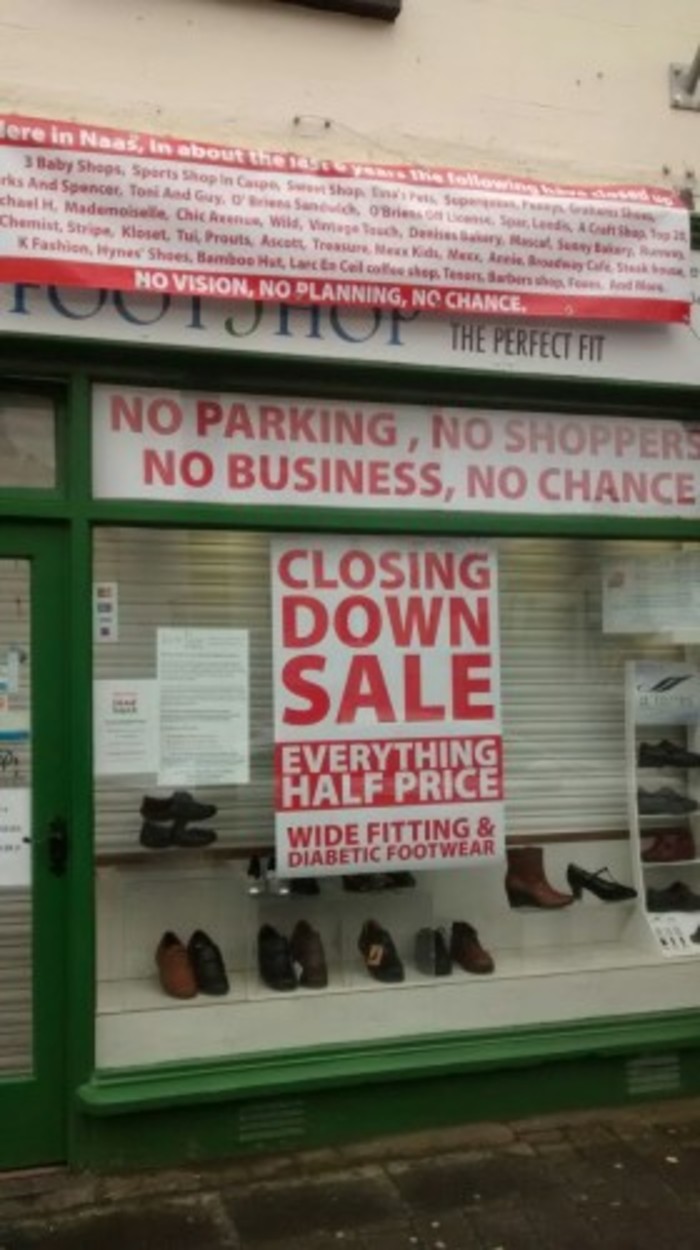 A shop closes down in Naas

Naas also suffers from a lack of parking, something which was compounded by the decision to build the disused shopping centre on the site of the St Corban’s car park. This resulted in over 200 parking spaces being lost to the town.

Local TD Bernard Durkan told Fora that he is now organising a meeting between stakeholders in the shopping centre in an effort to see what is needed to get it open and kick-start a renewal of the town centre.

“No matter what side you approach from, the first sign that you are in Naas is that you see the old cranes (at the shopping centre) over the sitting over the town,” he said.

“People say that it is close to being sold and that we have to wait, but it isn’t sufficient to say that we will wait any further.

“The country is moving on. If it doesn’t happen now, when there is a recovery taking place almost everywhere in the east of the country, the opportunity will pass and people will begin to accept it if nothing happens.

“There will be a meeting in the next few days to identify the issues. Whatever obstacles that have been the cause of the slowdown need to be gotten out of the way.”