FOR MOST PEOPLE, stress and burnout are signs that they need a better work-life balance. For Eoin Bara, the wake-up call was when he started coughing blood.

What first seemed like a chest infection proved to be a lot more serious. Bara had contracted haemophilus influenza type B, a nasty respiratory illness that can serve as a precursor to meningitis.

Bara was running the company he founded in 2011, a web design firm called V7. He continued to head up the business as the illness progressed until he realised that there was something seriously wrong.

“I was trying to work during this period, but then I began coughing up blood. I was bed-bound for six weeks and hospitalised for a week and a half.”

Bara would make a full recovery, but the illness was one of the factors that led him to reassess his career.

“It put things in perspective. Money comes and goes, and I became more about work-life balance and people being happy, as wacky as that sounds,” he says.

The 29-year-old Offaly native had worked in IT and website development for years, something he fell into after missing out on his first choice for college, studying medicine.

“I got offered a job at a phone carrier, but then they refused me the job at the last stage because I had no third-level qualification,” he says. “I got a masters in web-tech from NCI and then set up V7.”

Getting the firm off the ground was tough, and Bara nearly considered packing it in.

“After the first seven months, I’d run out of savings and racked up credit card debt. I was living off a fiver a day and got offered a job at a bank,” he says.

“I remember the temptation to pack it in and pay off my debts, but there was this niggling feeling that if I didn’t (stick with V7) I’d regret it. The next month we secured Intel as clients, so I was thankful I didn’t take it.” 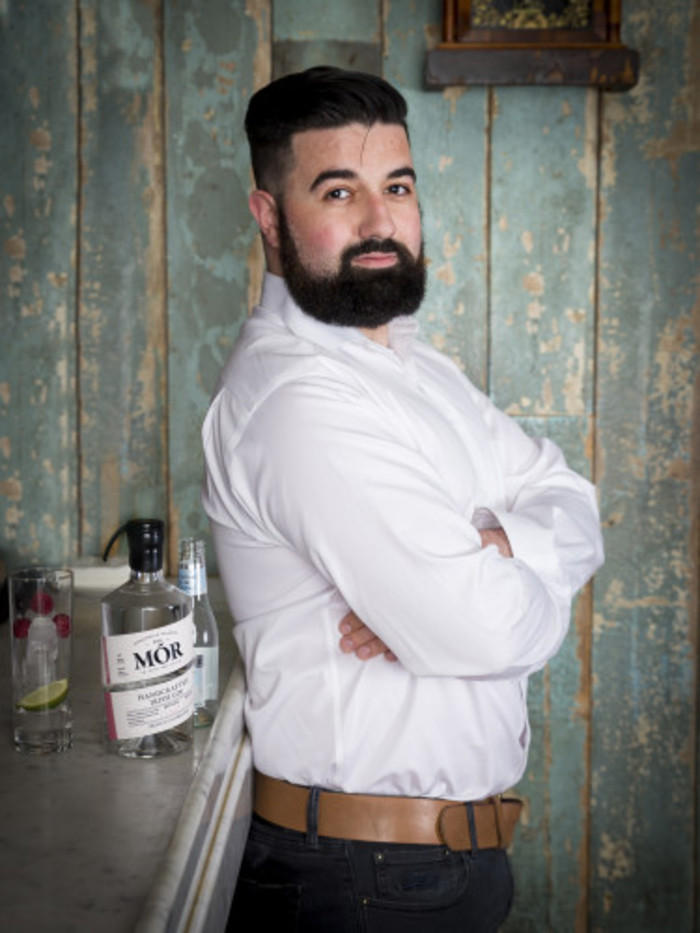 While V7 had been relatively successful, employing more than a dozen people at its height, the work wasn’t something that Bara felt passionate about. That something was gin.

Working with alcohol was in his family as Bara’s grandfather had worked as a distiller for Tullamore Dew until it closed its branch in the town.

“I remember I was out with a friend, and she asked me if I was doing what I loved. I said no. She asked me what do I love, and I said ‘gin’,” Bara says. “I was bored with drinking gin that was OK, I wanted to make something that was exceptional.”

Around the start of 2015 Bara travelled to a slew of different countries – Scotland, Canada, South Africa, Australia – to learn different distilling techniques.

When he returned to Ireland, he cobbled together about €300,000 from a mix of different sources, including from banks, friends and family and his own savings, and went about establishing a distillery in Tullamore, Offaly.

“I didn’t think it would be as difficult as it was. Blind optimism was required, because if I’d known how hard it was going to be, I wouldn’t have done it,” he says.

“Getting approval from Revenue, getting a suitable facility, getting planning permission, getting fire safety certs … there were a lot of forms and box-ticking.

“We also went through three different premises before we got to the last one, the one we’re in now. It was very hard to find a suitable place.”

By October 2016, Bara had found a facility in Tullamore and had got the finance in place to officially open. The first batch of Mór Irish Gin was finally distilled and sold that same month. 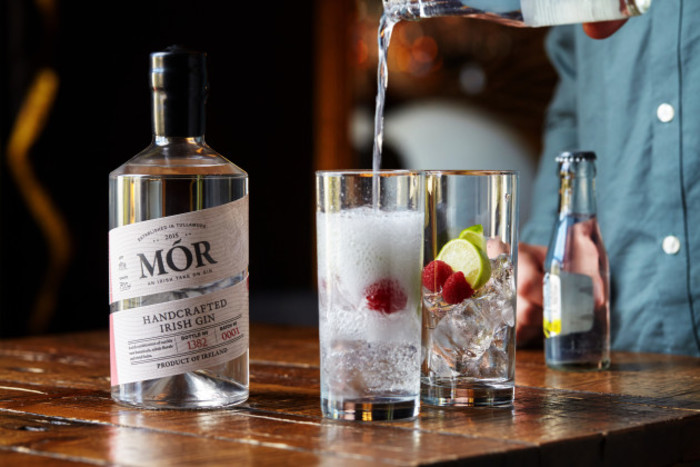 Since then, the company has expanded and now employs six people full-time, including Bara.

All stages of production – distilling, mixing ingredients, bottling, labelling – are handled at the company’s facility in Tullamore, the Arderin Distillery, which is named after the highest peak in the Slieve Bloom mountains.

It takes the firm about three days to produce one batch of gin, which is generally a bit more than a thousand bottles.

Several things stop the firm from producing its gin more quickly. For example, the company gets all the water for its gin from the nearby Slieve Bloom, the same source used by Tullamore Dew.

However, whereas Tullamore Dew has a 14km pipeline that runs directly to its production facility, Mór Irish Gin has to do it the old-fashioned way.

“I’ve a pickup truck and I go up into the mountains to get the water, I put 1,000 litres into the truck and we use it to blend the gin,” Bara says.

“None of this is easy. We could have used reverse osmosis (to make the process simpler), but when we tasted it you could taste the difference.” 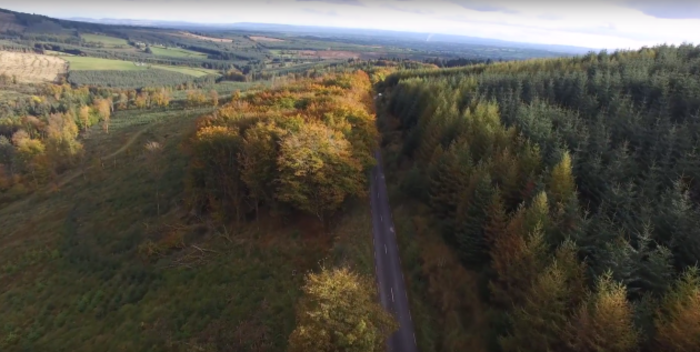 After it has made the product, the company sells on its gin to distributors, which in turn sell the spirit to pubs in different parts of the country.

“We have good coverage in the west of Ireland and decent coverage in Dublin city centre,” Bara says. The company is trying to expand outside of those areas and grow in different parts of Ireland.

While the Irish market accounts for the bulk of its sales, the firm also sells to a handful of other countries including Canada, Switzerland and the UK.

The firm was also in talks for a 46-state distribution deal in the US that would have given it near-national coverage. However, Bara says that the firm will likely turn this down to focus on a proposal that would see it instead concentrate on selling to six states instead.

A 70cl bottle of Mór Irish Gin’s flagship product costs about €47, towards the pricier end of the market, but Bara says that the company isn’t targeting people who just want a run-of-the-mill gin and tonic.

“We want someone who wants to try new flavours,” he says. “Our target is people who enjoy gin and want something unique.”

Mór Irish Gin is mainly up against the all-conquering multinational-owned gin brands, such as Hendrick’s, which is made by Scottish whisky giant William Grant & Sons. 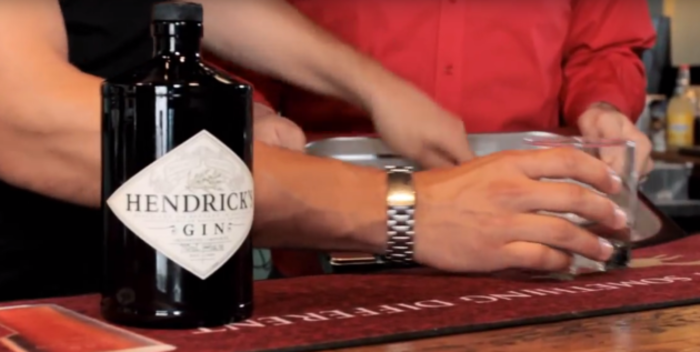 Bara says that relations between other small producers are good, with individual operators friendly as they all aim to take some of the market from the bigger players.

“For example, the guys in Glendalough (Distillery), they supplied us with corks when we ran out,” he says. “There’s a sense of community among the smaller distillers. We’re all trying to get some of Hendrick’s market.”

The company’s gin uses flowers and berries to give it a unique taste, and Bara says that the firm relies on this, and good worth-of-mouth, to help it boost its sales.

“We try to get bartenders on our side and educate them on how our gin tastes and smells,” he says. “Generally when people try it, because it’s so different, they either love it or loathe it, but thankfully it seems to be more on the love side.”

Mór Irish Gin is relatively small at the moment. While financial details about the company are unavailable as it has yet to file accounts, it will likely take in a few hundred thousand in sales this year, assuming all goes well.

However the company has big plans, and over the next few years the Tullamore business will focus on expanding the number of countries that it sells to.

“It’s about growing rapidly and balancing that with trying to hold onto your passion and the quality of the product.”

Bara’s initially jokes when asked about his own goals – “two dogs and a garden” – before saying that he is happy building up Mór Irish Gin and doesn’t see himself switching industries again.

“I’ve no plans to sell the distillery, for me this is a passion project,” he says. “I enjoy going to work every day and I’m much happier than I was before.

“I would like to keep this as a forever business. Maybe expand and make more products, but that’s about it.”