CONFECTIONERY GIANT MONDELEZ has been told to grant dozens of workers at its Cadbury factory in Dublin a pay hike.

The Labour Court recommended that technicians at the outpost be given a 4% raise in return for introducing some minor measures to increase productivity, such as being contactable by company mobile phone when on site.

Both the Technical, Engineering and Electrical Union (TEEU) and the Unite union were pushing Mondelez for a 5% boost in basic pay.

They said that they were doing this as part of a “general pay increase”, and said that they wanted this to be introduced “without the precondition of further productivity measures”.

While the ruling did not give much more detail of the union’s claim, it did allude to the fact that many previous salary rises had been linked to some sort of new productivity measures.

It also mentioned that changes were already introduced last year.

“The trade unions have submitted that a need exists at this time, taking account of the significant change agreed in 2016, to make a pay adjustment which is not connected or associated with change or productivity,” the Labour Court said.

The TEEU and Unite represent about 44 Mondelez employees who are based in the company’s Cadbury factory in Coolock, north Dublin, where the firm has about 500 staff.

Last year workers at the Coolock site briefly went on strike following Mondelez’s move to outsource 17 jobs as part of a restructuring proposal. 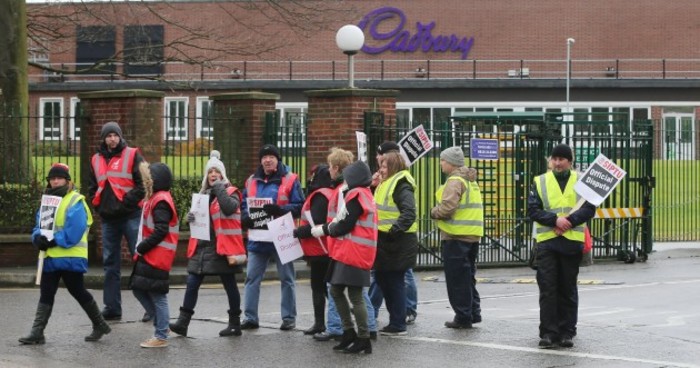 The strike action was quickly suspended after unions said that cost-saving measures that did not include outsourcing were put forward.

In its argument to the Labour Court, Mondelez said that it was looking to “manage its cost base, hit cost reductions targets and manage the competitiveness of the site”.

While it did not rule out a pay deal, it said that there would have to be a trade-off in work changes.

The Labour Court ruling largely went down the middle, recommending a 4% increase in pay for workers.

In return for this, several new productivity measures would be introduced:

Both sides are now considering whether to implement the ruling or look for changes.

A spokeswoman for Mondelez said that the company would not comment on the specifics of the agreement “as we are in ongoing dialogue with our union representatives”.

A spokesman for the TEEU said that the recommendation will now be put to union members to vote on. He said that while this could happen before Christmas, it is more likely to take place in the new year.

Mondelez employs about 600 people in Ireland between its two main facilities in Coolock and Rathmore in Kerry.

A few years ago the firm employed about 900 Irish staff, however in February 2015 the company announced that it was closing its gum-base production plant in Tallaght with the loss of 45 permanent roles.

It also said that it would cut another 160 people in Dublin and Coolock.