THE FINANCE MINISTER will be monitoring the prices of excisable products like alcohol and cigarettes in Northern Ireland to stop cost differences that would lead to people crossing the border to shop.

Michael Noonan made the comments in the Dáil when asked about his plans to prevent a loss of trade to Irish retailers after the Brexit vote.

Ibec group the Alcohol Beverage Federation of Ireland, which represents alcoholic drinks manufacturers and suppliers, is one of several trade bodies to raise the alarm about what Brexit will do to businesses south of the Border.

Director Ross Mac Mathúna told TheJournal.ie,”Irish consumers already pay the highest prices for alcohol in the EU at 175% the average.

“When the high prices are combined with the recent devaluation of sterling, cross-border shopping becomes very attractive.

“This loss in trade will have a detrimental effect on the local economies in border towns and the retail trade in particular.

“The fall in the value of sterling by 15%-20% means that products like alcohol which were already 20% cheaper in Northern Ireland than the Republic of Ireland are now up to 40% cheaper.”

Noonan has said that the price levels are monitored on a regular basis, and gave the following examples of price comparisons taken last month: 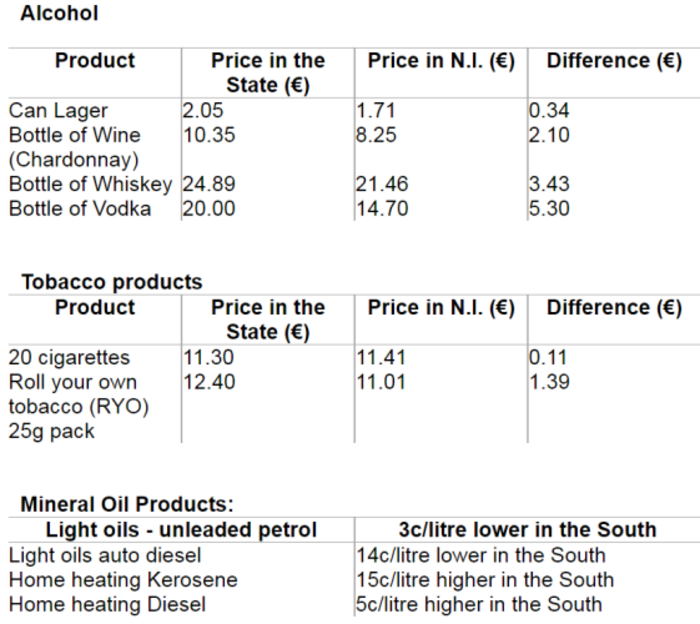 (Click here for a larger image of the figures above)

The above figures are based on a cross-border price comparison carried out in November 2016, updated for the euro-pound exchange rate as of 20 March this year.

Mac Mathúna said one of the key steps that should be taken is a cut in excise duty – a tax applied to products like alcoholic drinks. High excise rates and the resulting high prices penalised consumers and impacted tourism, he said.

Noonan said that price differences between the south and north are determined by VAT and excise rates in both jurisdictions, exchange rates and the pricing strategies of retailers.

He added, “Relative price levels between Ireland and Northern Ireland for excisable products are an important factor in determining budgetary policy every year.”

Excise rates on alcohol haven’t been increased in the past two budgets, however the stasis follows a series of increases during the recession.

Written by Cliodhna Russell and posted on TheJournal.ie