DESPITE PROTESTS FROM a firm owned by high-profile developer Pat Crean, a long-unused seaside hotel in Greystones has been placed on the vacant sites register.

One of the best-known developers in Ireland, Crean heads up the Marlet Property Group, a major developer of houses, offices and hotels.

Last week, a firm ultimately owned by Crean, Kavcre La Touche Limited, lost an appeal against a decision by Wicklow council to place lands on Trafalgar Road in Greystones on the vacant sites register.

The register for disused property was introduced last year in an attempt to prevent property owners from hoarding land that could potentially be developed for housing.

The Greystones site in question is the location of the long-vacant La Touche Hotel, a 120-year-old seaside development that closed in 2004.

An application to revise the previously granted planning permission and add a restaurant to the site was filed last year but later withdrawn by the developer. 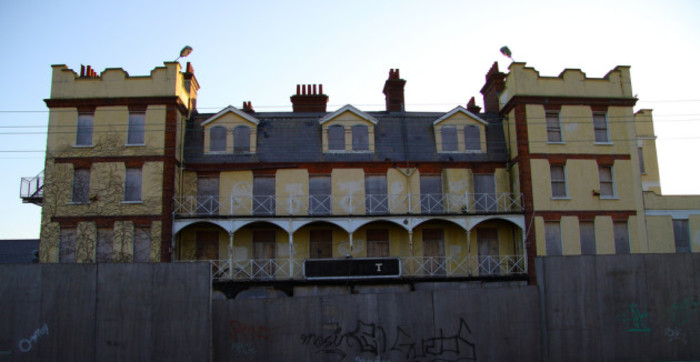 In its appeal to An Bord Pleanála, Crean’s firm argued the site has not been left idle by choice. The company added that some minor works commenced in June 2017.

Owners of lands added to the register can be slapped with levies of up to 3% of the market value of the site. This figure is due to rise to 7% from 2019.

Sites are added to the register by the local council and owners have 28 days to appeal at local level. If the council stands by its ruling, the decision can be appealed to An Bord Pleanála.

However Kavcre La Touche claimed it has not been able to proceed with full development at the site because the planning authority has not provided final planning compliance to the developer.

It added that the local council asked the firm to “hold off” on demolition and that its building team was waiting to commence the works.

But the council denied the claim, adding that it clearly outlined what works could commence prior to the pre-development compliance. It said the revised planning permission showed the developer didn’t intend to proceed with its earlier housing plans.

In its published decision, An Bord Pleanála decided to uphold the decision of the local council. It also noted that the “neglected condition” of the building has resulted in adverse effects on the surrounding area.

It was reported in the Irish Times last year that stormy weather caused the partial collapse of the building’s wooden facade, while the Bray People reported earlier this month that there had been development activity at the site in recent weeks.