AN ICONIC COFFEE kiosk in Dublin’s city centre has closed down after 38 years in business.

A notice has been placed in the window of The Kiosk on Leeson Street to inform customers of its closure. The note from its owner, Ned McCarthy, reads: ”Sadly the kiosk has had to close.

“I wish to thank everyone for their custom and friendship over the past 38 years. Good luck to you all for the future.”

The small coffee shop on the junction of Leeson Street and Adelaide Road was built in 1929 and originally served as a water pressure station and public toilets before it was converted into a small café.

The kiosk was designed by architect Michael Moynihan who also mocked up the former public toilets at St Stephen’s Green.

Speaking to Fora, McCarthy said he has been forced to close the kiosk for personal health reasons and “dwindling” business.

The building is currently being rented from Dublin City Council and there are still 24 years left to run on the lease agreement, according to McCarthy.

He added that there has been interest from a number of parties in sub-letting the kiosk, but Starbucks is not one of them.

“I tried as far as I could to keep it going. A lot of competition has arrived nearby but I believe the right people can make it work,” said McCarthy.

“There are plenty of people passing in the morning on the way to work, but it’s difficult to get them in. They’re like fish going up a river, we could never get them over.” 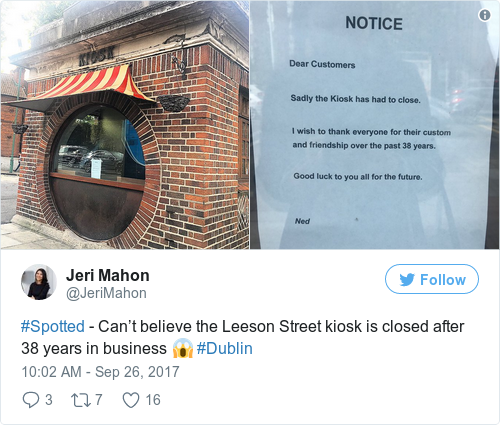 According to the Companies Registration Office, McCarthy and Sunil Sharma are the directors of The Kiosk (Leeson Street) Limited – a company incorporated over 60 years ago. They could not be reached for comment at the time of publication.

The most recently filed accounts for the firm showed that it was in the red during the financial year that ended 31 December 2015, when it made a loss of over €26,000. The result took the firm’s accumulated losses to over €321,000.

A few months ago, a nearby coffee kiosk was purchased by international chain Starbucks for €330,000.

The 37 sq ft site at the junction of Lansdowne, Pembroke and Northumberland roads in Ballsbridge was bought by brothers Colum and Ciarán Butler, who oversee Starbucks’ franchises in Ireland.

The small kiosk was originally used to store equipment in the 1920s by Pembroke Fire Brigade. The previous owner of the kiosk bought the site for €235,000 only two years ago and rented it out for €15,000 annually.