CHEESTRINGS AND plant-based foods were just some of the things on the menu as Kerry Group reported better-than-expected earnings  for the first half of the year.

The listed company’s market value hit an all-time high of €19.2 billion as it recorded growth in reported revenue of 10.7% in its interim results.

Edmond Scanlon, the chief executive of Kerry Group, highlighted the importance of developing markets and consumer demand – including an increasing demand for plant-based foods.

The group’s taste and nutrition business reported volume growth of 3.8%, to €2.9 billion, and according to Scanlon notable highlights included growth in the meat, snacks, beverage markets, while “developing markets globally grew at a rate of 9.1%.”

The business also saw growth in the Americas, Europe and Asia Pacific-Middle East-Africa (APMEA) regions, though Scanlon noted that volume growth in North America – at €1.5 billion – was impacted by increased inflation.

In Europe, the figure was just over €700 million and in APMEA regions, just over €600 million with China, India and the Middle East driving most of that growth.

In the consumer foods business revenue increased by 0.6%. Scanlon noted that the group has extended its food-to-go ranges, in Cheestrings and Fridge Raiders, both of which have shown strong growth. 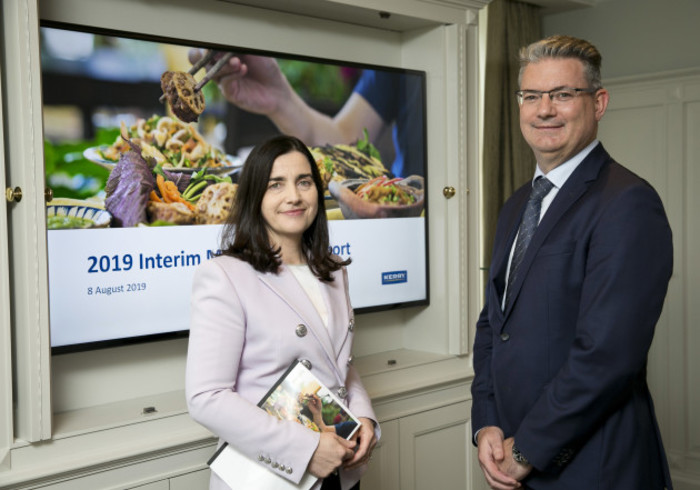 Consumers “want the next generation of snacking products”.

A big part of this is the driving consumer demand for plant-based nutrition.

“At the beginning of this trend what we saw was customers were really working hard to get a product to market really quickly. Now consumers demand that the quality of these products is much better from a flavour standpoint, from a texture standpoint, but especially from a nutritional value stand point and a clean label,” he said.

“This is driving customers to expand their product ranges, improve their existing products and introduce new applications and formats,” Scanlon said, indicating in his presentation examples of dairy-free ice-cream, meat substitutes and high-protein plant-based beverages.

He also noted that the group is not looking at investing in any more meat-substitute companies, following its investment in Ojah, a Dutch company specialising in plant-based protein last year.

“That investment was very much around really understanding what was going on from a plant protein perspective as it related to meat substitutes; understanding all the manufacturing process, understanding the impacts of tastes, texture, flavour etc.”

He added that this doesn’t mean the group doesn’t see the area as an opportunity.

“We do see a significant opportunity but it’s more in the ingredients and taste space. I think plant based protein is something that’s here to stay. I think it’s a huge consumer demand.”

Kerry Group will work with companies who are developing those products because “a lot of the products that are in the market today, they need further improvement and there’s a huge demand there to improve those products. I don’t see that demand waning any time soon – if anything I think it’s going to accelerate.”

On the other end of the spectrum is cheese tea, which is one of the group’s customer partnerships.

“Cheese and tea might sound like an unusual combination but it’s a very popular and big trend in the Chinese market. Consumers love this product because it allows them to create new personalised beverages,” Scanlon said.

When it comes to Brexit, Kerry Group is “as well positioned as we possibly can be”, Scanlon said.

“We’ve put a huge amount of work into preparing for whatever scenario is going to come out of these negotiations. We have spent to the tune of about €5 million so far this year on getting ready for Brexit. We have done as many what if scenarios as we possibly can do,” he said.

“Regardless of what happens, there will be some short term disruption. There’s no doubt about that. For the longer term, what we would be more concerned about actually is the impact on consumption locally in the UK. Even if there’s a very orderly Brexit I don’t necessarily see any significant improvement on consumer demand.”