DANISH HOME RETAIL brand JYSK has looked at some 20 locations for its planned Irish rollout.

The 40-year-old Nordic company – which operates some 2,700 stores across 51 countries – announced today that it will set up a head office in Dublin ahead of the April opening of its debut Irish store in Naas, Co Kildare.

Two further locations, in Drogheda and Navan, will open in May and a fourth branch in Portlaoise is scheduled to open by the end of the summer. It will start selling online and offer home delivery to Irish customers from 15 April.

In total, JYSK – which is pronounced “yusk” – aims to open 15 stores across the Republic.

All of the new branches will feature a refreshed store concept launched last year that includes a newly designed shopfront and refreshed interiors.

“We are looking for opportunities. We have more than 20 locations that we have been visiting,” he said.

Although Tuominen declined to disclose locations or give a time frames for JYSK’s Irish expansion, he suggested the retailer is looking at locations that can deliver the highest footfall:

“We are aiming to be close to the customer. Our target is to be where the customers are.” 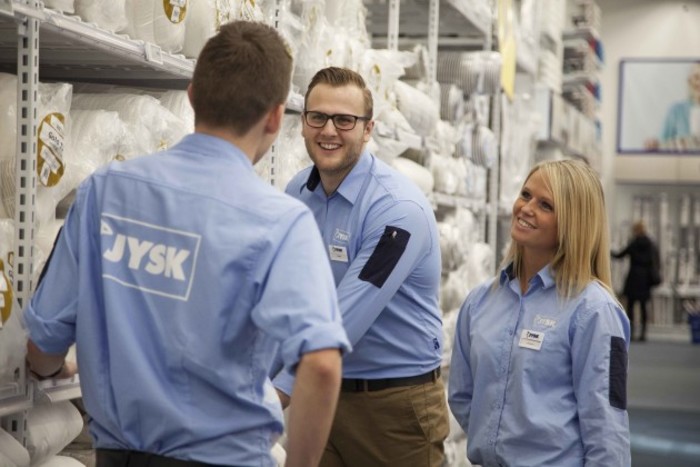 JYSK will face stiff competition from Scandinavian rivals Ikea and Søstrene Grene, which also sell affordable homewares products and are already well-established in the Irish market.

“We’re working in 51 countries, so of course these companies are well-known for us. I think for the customers, competition is good and actually creates value,” he said.

Jennifer Johnston, who is sales and marketing manager of JYSK Ireland, told Fora the retailer differentiates itself by rolling out new products on a more regular basis to cater for changing design trends.

“One thing that we are very strong on is Scandinavian designed products. We are very good at launching new products regularly,” she said.

Founded in Denmark in 1979, JYSK employs over 23,000 people around the world and reported sales of €3.5 billion last year.

The company is owned by entrepreneur Lars Larsen, who established the brand in Aarhus city. He owns and co-owns several companies, including online furniture outlet Bolia.com and hotel furniture supplier Interior Direct.