THE IRISH WHISKEY sector has been warned that it is too reliant on the US market – while alcohol producers as a whole should brace for future disruption from the legalised cannabis trade in the States.

According to Bord Bia, whiskey producers are forecast to surpass an industry target of shifting 10.5 million cases – or more than 120 million bottles – by the end of this year.

Having already enjoyed several years of growth, 2018 was a bumper year for the spirit with exports valued at €623 million, up by €45 million on 2017′s tally, according to a new report prepared by the national food board.

However, the State agency warned that there is a “clear over-dependence” on the US market, which accounts for nearly 60% of all Irish whiskey exports.

Patricia Callan, director of the Alcohol Beverage Federation of Ireland (ABFI), told Fora that whiskey makers have been heavily focused on America for a good reason.

“We’ve gone from four distilleries to 21 in the last decade, so for a lot of new entrants and smaller companies, it makes sense for them to first go to a market where Irish whiskey is a well-established category,” she said.

The industry doesn’t view the US as a single market, focusing instead on drumming up business in specific city regions, Callan said:

“In the US, like Canada, certain states will implement a government buying policy, so the government buys all alcohol. So if you can get one of those contracts, it’s great.” 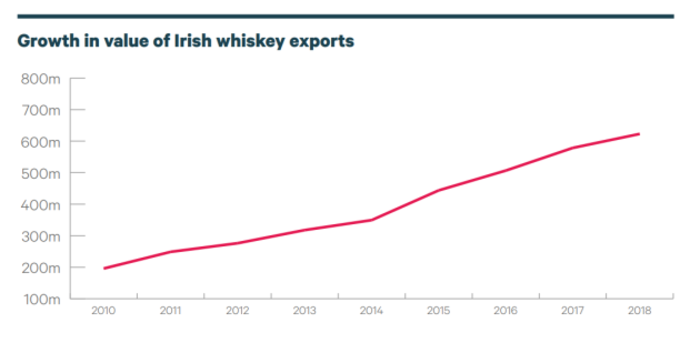 Although she is bullish about the potential for further opportunities in North America, Callan said there are a number of issues on the horizon that could hamper the industry.

For example, the EU’s 25% import tariff on American bourbon – introduced last year in retaliation for Donald Trump’s taxes on foreign steel and aluminium – could spark a counterattack from the US, the ABFI boss cautioned.

In terms of beverage exports overall, the US dominated last year, accounting for €620 million in Irish exports, while sales to the UK are now valued at €45 million, up 19% on 2017′s figures.

Taiwan and Thailand are also showing “significant promise”, where exports of Irish whiskey rose by 44% and 22% respectively, albeit from a low base, “as people started to broaden their interests beyond Scotch blends”.

Bord Bia identified cannabis, which has been legalised in several US states, as an ingredient that has the potential to “disrupt the alcohol category globally, both as a substitute and as an alternative product ingredient”.

But Callan said the substance only represents a “tiny market” right now and could ultimately create opportunities for drinks companies.

Elsewhere in Bord Bia’s report, sheep meat was identified as a growing category, with export values for 2018 up 15% to €315 million on the back of strong price gains.

This year, a major factor impacting sheep meet producers will be the religious festivals of Easter and Ramadan, which occur about two weeks apart in 2019.

Sheep meat is an important part of both celebrations, so “the timing of these festivities will provide a significant impetus to trade demand over that period”, according to Bord Bia.