THE BODY THAT represents Irish tourism businesses has criticised the government’s “unambitious” approach to growing the sector in Ireland.

The Irish Tourist Industry Confederation (ITIC) has published its review of tourism in Ireland over the past 12 months and also forecast changes in the sector over the coming year.

At the launch of the report, ITIC chief executive Eoghan O’Mara Walsh said that the current national tourism targets up to 2025 that are set out by the state up are “unambitious and modest”.

O’Mara Walsh noted that the government’s decision to maintain the 9% special VAT rate for tourism services does help businesses in the sector remain competitive but the state’s plans to boost tourism will not unleash its full potential.

“Tourism has much more potential for Ireland, but only if the right strategies and investment policies are pursued. It is one of the few industries that provides regional balance and delivers jobs in all parts of the country,” he said.

“It is high time that a new strategy is put in place for tourism growth that is led by the industry and facilitated by pro-tourism policies from the government”. 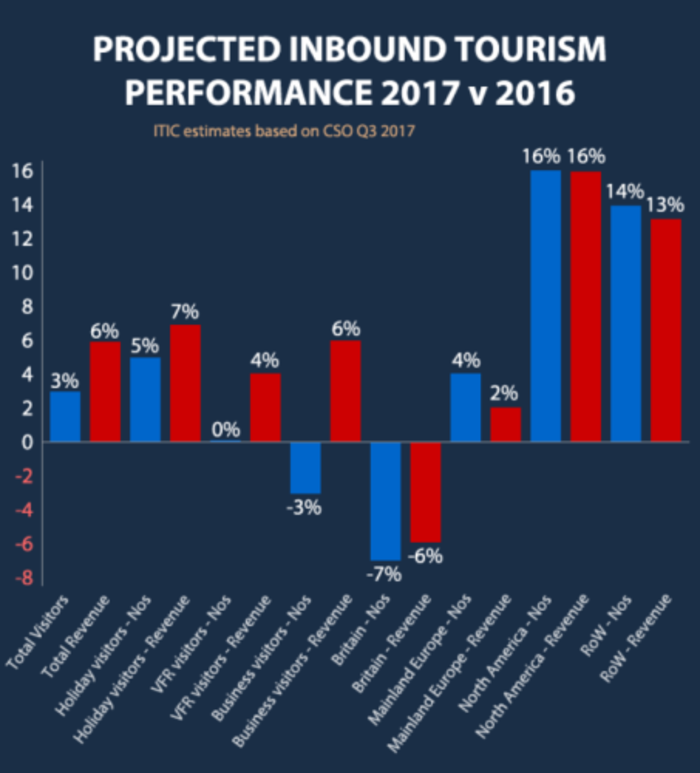 O’Mara Walsh said that the ITIC will publish ‘Tourism 2025+: An Industry Strategy for Growth’ later this year which will outline the potential value of inbound tourism if it increased by 50%.

He added that the sector is at a “key juncture” and a further 10,000 jobs could be created in the industry during 2018.

Figures compiled by the ITIC showed that 25,000 new tourism jobs were created in the past 12 months. In total, 230,000 people nationwide are employed in the industry.

Despite the prospects of creating further employment, some experts have raised concerns about the strain further tourism growth could put on the Irish economy.

Travel industry expert Eoghan Corry has said tourism has put local infrastructure under pressure in some parts of the country.

It has also been warned that a further spike in tourism activity in Ireland could cause a wave of anti-tourist sentiment – as seen in Barcelona and Venice this year where protests took place. 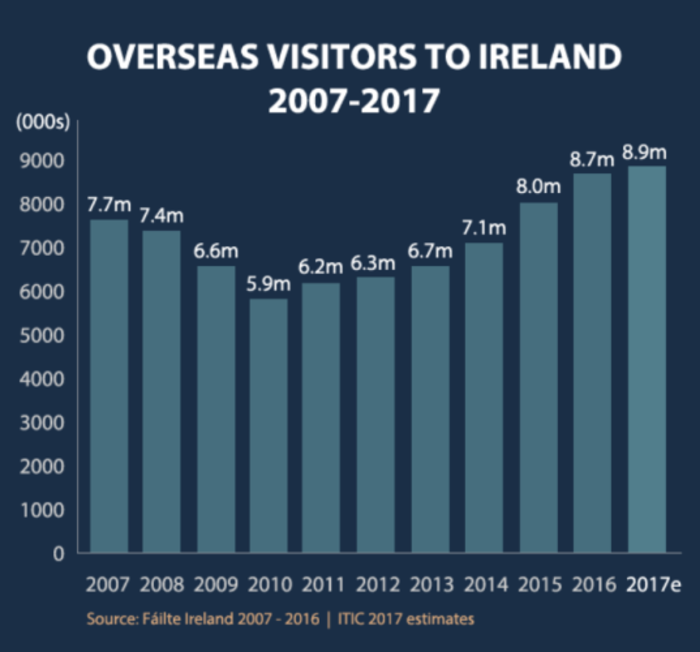 Analysis from ITIC has shown that Ireland’s tourism sector is in rude health. The sector hit a new high this year when a record number of international visitors came to the Republic.

The latest data from the Central Statistics Office (CSO) showed that the number of overseas visitors grew by 3% to 8.9 million this year – the highest number on record.

The industry’s worth also swelled to a new record of €8.7 billion – overseas visitors spent roughly €6.5 billion on visits to the Republic. However, there have been some worrying trends over the past 12 months.

Although there has been an overall boost in overseas visitors, CSO data revealed that during July there was a decline in tourists visiting Ireland.

Tourism Ireland said it was a “worry” and “definitely something we are concerned about” that a typically busy month for visitors had a 1.1% decline.

Separate analysis of CSO data has also shown that the number of British visitors to Ireland has plunged over the past 12 months due to a “currency challenge”.

O’Mara Walsh welcomed the news that the Common Travel Area between Ireland and the UK will be retained and that there will be no hard border on the island post-Brexit, which is it hoped will help offset the potential loss of tourists from the UK.