THE IRISH GROCERY market has slipped into deflation for the first time in two years as the weak pound starts to feed into local prices, according to analysts.

The latest figures from Kantar Worldpanel Ireland also found that SuperValu has regained the title of Ireland’s largest grocer after lagging slightly behind Dunnes Stores for the past two months.

The consumer research agency said that in the 12-week period to the end of 26 March prices in the Irish grocery market fell by 0.2% compared to the same period last year.

Kantar Worldpanel director David Berry said that the deflation is likely due to the lower value of sterling, which dropped sharply after the Brexit vote in anticipation of economic woes for the EU’s second-largest economy.

“Only now are we starting to feel the effect of the weakened pound as the price of British imports drops,” he said.

“For the first time since May 2015, grocery prices are falling so consumers are likely to have a little extra cash to hand, though this doesn’t necessary mean they’ll spend more in store.

“Many will see the break from inflation as a chance to cut down their grocery costs and pocket the savings instead.” 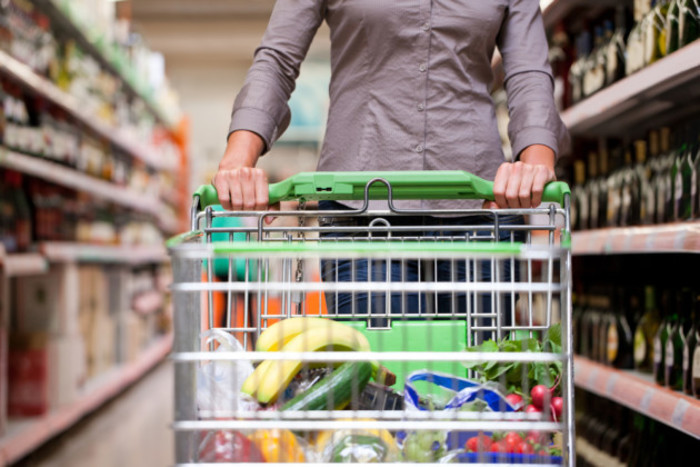 The findings come shortly after the CSO’s most recent consumer price index found that the cost of and non-alcoholic drinks fell by 2.6% during February compared to the same month in 2016.

Overall, despite the drop in prices, supermarkets saw the value of their sales rise by 0.7% during the 12-week period.

Kantar Worldpanel said that this increase was “significantly below the level during the same period in 2016″.

“With the Easter weekend not until the middle of April this year, the holiday falls outside the latest 12 weeks ,while it was within the comparable period last year,” it said.

“As a result overall growth in the market fell … demonstrating Easter’s significant boost to the market.”

SuperValu held the number-one spot in the industry during the period. It had the largest market share, 22.6%, although the value of its sales fell by 1.4%.

Dunnes was just a fraction behind in second place, with a 22.3% market share, while German discounters Lidl and Aldi held just under a quarter of the market between them. The pair also both saw strong increases in the value of their sales. 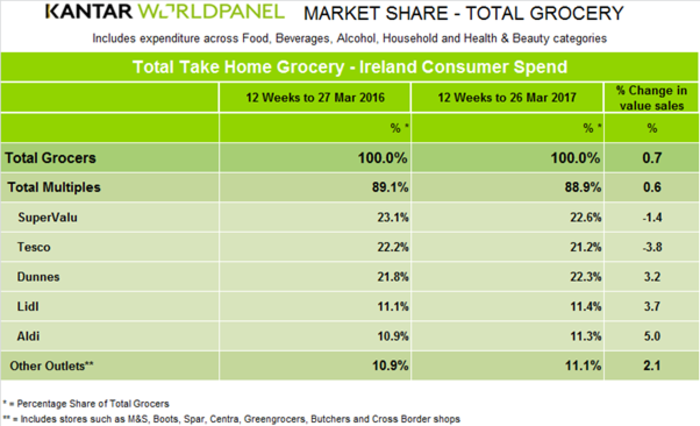 Kantar Worldpanel said that Dunnes “still has reason to celebrate”, despite losing market share. Its sales grew 3.2% year-on-year, marking the 30th consecutive period of growth for the retailer.

At the other end of the spectrum, Tesco’s poor performance continued, with the value of sales at the UK chain falling 3.8% during the latest period.

Lidl had success in getting shoppers to visit its stores more regular, growing sales 3.7% in the period, while Aldi remained the fastest growing retailer with a 5% increase in sales.