THERE WAS A significant surge in jobs in the Irish financial services sector last month, but it is too soon to say if Brexit is the cause of the jobs boom in the industry.

Results from the latest Irish Employment Monitor from recruitment firm Morgan McKinley have shown that jobs in the Irish financial sector jumped by 62% between July and August of this year – the figures for last month are also a 65% increase on the number of positions available this time last year.

The surge in job opportunities within Ireland’s financial firms has come less than a month after a separate jobs report by Morgan McKinley showed that positions available in London’s financial hub dropped by 12% in the month after the UK’s decision to leave the EU.

Morgan McKinley head of Irish operations Karen O’Flaherty said there has been a specific spike in advertised positions for fund and asset managers in the Irish capital.

She added that there has also been an increase in demand from banks and insurance firms for people to fill financial advisory roles.

“The rise in disposable income within the economy is driving growth in the pension and investment business leading to banks increasing headcount in these areas,” she said.

She added that there is also increased in demand for data scientists within the banking sector and professionals with a lot of compliance and regulatory experience due to changes in EU legislation. 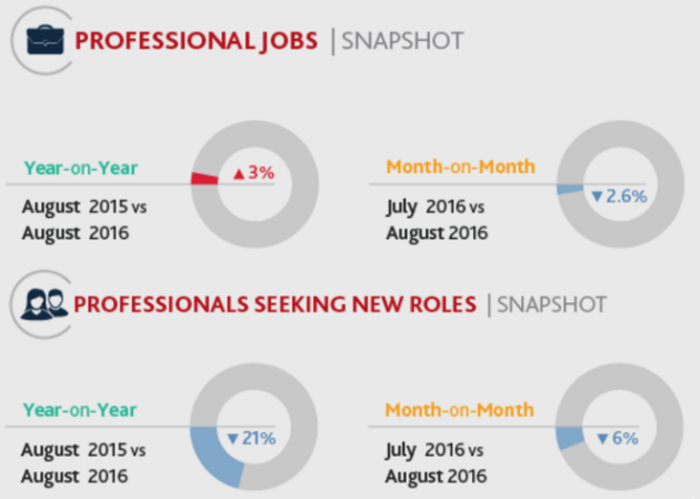 In the aftermath of the Brexit referendum result, Boston Consulting Group, which advises a number of Fortune 500 companies, suggested that nearly a fifth of all the jobs in London’s financial district could be shifted to other European cities, with Dublin and Frankfurt earmarked as possible locations to benefit.

However, another report has suggested that Ireland is ill-equipped to deal with the number of firms possibly looking to relocate to the Republic.

The Morgan McKinley research into the Irish jobs market also highlighted that over 7,000 professionals were seeking employment last month, which was a 21% decrease compared to the year previous.

There was also a 2% decrease in the availability of professional jobs last month compared to July 2016, this is in contrast to an 8% drop off in available positions between the same period last year.

“The drop in jobseekers when compared to the same month last year does however reflect the falling unemployment rates generally since 2013. It also indicates the challenge facing employers seeking talent in some key sectors.”