IT LOOKS LIKE the French have developed a taste for Irish beer as the value of exports to the country nearly doubled last year – though total overseas sales decreased.

The latest beer market report from the Irish Brewers Association (IBA) showed that the value of exports to France increased from €19 million in 2017 to €32 million in 2018.

IBA head Jonathan McDade told Fora that even though France has historically been a strong-performing market for larger Irish craft breweries, the rise was something of “a pleasant surprise”.

According to McDade, French consumers don’t typically favour any one type of beer and have demonstrated a growing interest in drinks from both large commercial breweries and smaller craft outfits.

The findings of the IBA’s report are in line with those of French brewers union Brasseurs de France, which says that beer’s popularity in France has risen over the past four years after a 30-year slump in consumption.

Despite the gains made in France, the IBA highlighted a drop in the value of total exports by 1.8% to €268 million.

At home, beer remains the most popular choice of alcoholic drink for Irish consumers. Although total beer sales increased by 3%, per capita consumption rose by just 0.4%. This reflects the fact that people are drinking less alcohol.

Of the different beer varieties, lager saw the biggest growth in 2018, with a three-percentage-point increase in its market share to 63.8% while stout fell by three percentage points to 29.3% of the market.

The high temperatures of summer 2018 are to thank for lager’s gains, according to McDade, adding that off-licences and supermarkets recorded a bump in sales.

Ale’s share of the beer market clocked in at 6.3%. Non-alcoholic beer sales rose by 60%, albeit from a small base – the category accounts for just 0.6% of the market. 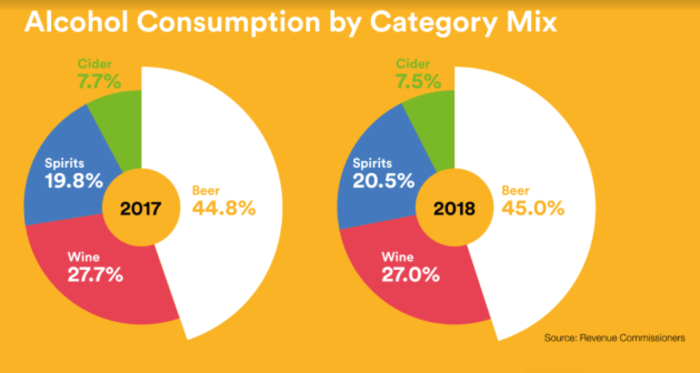 Excise duty and uncertainty around Brexit are two of the main challenges facing the sector today, according to the IBA.

Beer contributed €430 million to the Exchequer in excise in 2018, compared to €424 million the previous year.

“As always, we call on the government to reduce excise for brewers and the hard pressed consumers as well,” he said.

The UK is the top destination for Irish beer exports and accounts for €109 million worth of exports. McDade said Brexit uncertainty is providing logistical challenges for brewers.