WITH CONSUMERS INCREASINGLY preoccupied by their physical health and well-being, Europe’s fitness industry is enjoying a golden age – but the Irish market still has some distance to go when it comes to reaching the same heights as our gym-fanatic neighbours.

A recent report from Deloitte and not-for-profit group EuropeActive estimated that gym bunnies across the continent spent some €27.2 billion on health and fitness in 2018, a 1.2% increase on the previous year’s figure.

With sales in the US estimated to be worth €26.6 billion, Deloitte and EuropeActive concluded that Europe could be the largest fitness market in the world.

With the equivalent of 10.4% of the population belonging to a club, the rate of market penetration is low compared with Sweden’s rate of 21.6% or the Netherlands’ 17.1% – countries with high urbanisation rates and dominated by large, standalone operators. 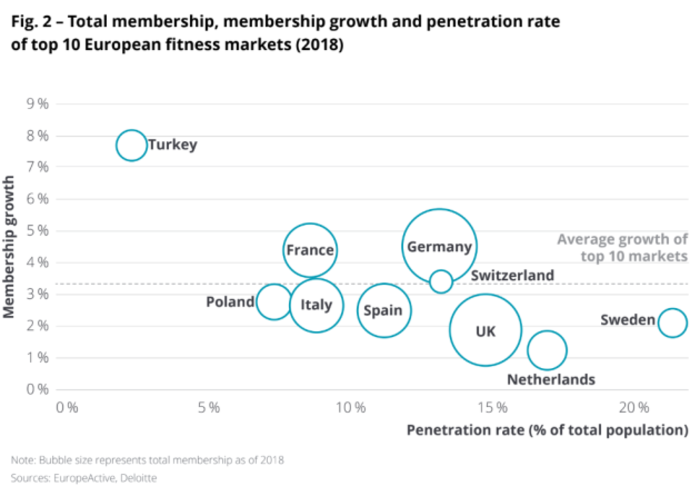 Ireland has one of the lowest member-club ratios in Europe, which is partly due to the high volume of independently owned facilities that operate in the arena.

“The mass market is the mid-market. It would be your typical local authority leisure centre or a hotel leisure centre, which might have a pool and a gym attached to it,”  Conn McCluskey, chief executive of not-for-profit organisation Ireland Active, which participated in the Deloitte-EuropeActive study, says.

McCluskey explains that Europe has seen an explosion in stand-alone, minimal-service gyms with low operating costs and cheap memberships to boot.

It’s only over the last decade that budget chains such as FlyeFit, Ben Dunne Gyms and franchise outfit Énergie have started to make a dent in Ireland, though they still operate a relatively low number of clubs located mostly in Dublin.

The country has also been largely untouched by the more expensive, boutique offerings available in major cities like London.

McCluskey expects both ends of the market to evolve over the coming years.

“You have the low-cost operators, which might appeal to a younger, more cost-conscious market. But at the other end, you have boutique gyms emerging, which might offer a higher service offering,” he says.

Ben Dunne, who founded the eponymous 10-locations gym chain in 1997, has seen a big shift in both the state of the market and consumers’ attitudes towards fitness.

“When I started off in the business, the upper end of the population were people who used fitness or leisure clubs. They were highly priced and not at a reach for a lot of the population,” he tells Fora.

“Now, it’s available, certainly in our clubs, at a price that’s affordable to a lot of the population.” 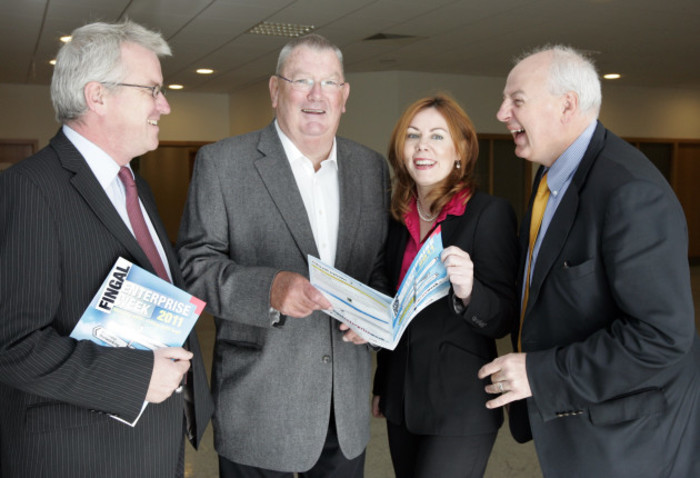 Dunne notes that once upon a time, most customers were satisfied with cardiovascular machines like treadmills and little else. Today, there’s high demand for weight-lifting equipment and classes in particular.

“People are making it part of their routine now to exercise three or four times, or maybe more, per week,” he says.

Dunne – a former supermarket supremo at Dunnes Stores – sees a lot of similarities between the gym industry today and retail.

“Every season (in retail), you have to change your product because there’s no point selling winter merchandise during the summer,” he says.

Earlier this year, high-end brand Perpetua opened its first branch in Dublin’s docklands with the intention of attracting tech workers in the area.

Michael Price, who co-founded the firm in London in 2013, forecasts that Dublin will over time start to mimic the UK capital, which became awash with boutique offerings after a period of high growth for big-box gym operators.

He suggests the UK – London in particular – is “by far the most advanced boutique luxury fitness scene” in Europe and sets a trend for the wider continent.

“It’s so close to American major cities, New York and LA specifically. They would be the two hot spots and give direction to where fitness is going and where emerging markets need to take it,” he says.

Price explains that the US has evolved into a market that provides more experiential, specialised offerings similar to Perpetua in Dublin, which promises highly intense workouts enhanced with ancillaries such as special lighting.

“We want to become (clients’) fitness manager. Everyone’s got a bank manager – fitness should be managed,” he says.

“It’s not enough to offer a space with gym equipment and changing rooms. You have to make this the best hour of (the customer’s) day.” 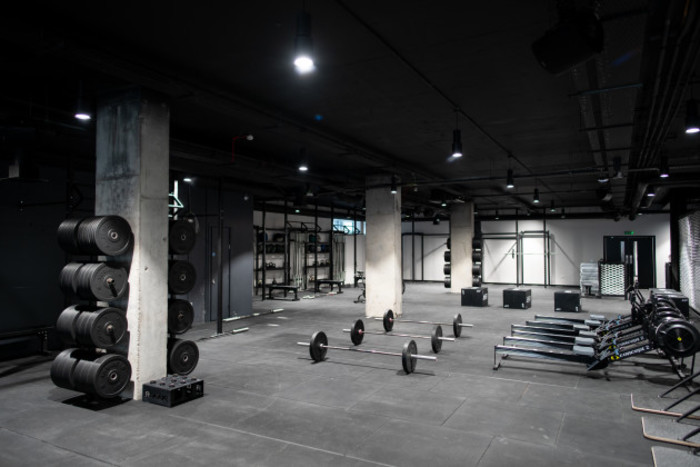 Price is highly critical of what he sees as a homogeneous offering from large, low-frills gym operators.

“It has worked really well. Those guys have made a lot of money. But that stuff doesn’t inspire me,” he says.

“We try and create these enriched environments. You take other industries, which in our case is nightclubs. What people love about them is sound, light. That enhances the evening; it gives people a kick.

“You try and plug your fitness formula into that. Now you’ve got a lot of stimuli. People are not getting that from a budget gym … Like any industry, it has to evolve,” he adds.

Ben Dunne says he doesn’t feel threatened by the arrival of boutiques.

“I spent most of my life in the retail business. My father started off as a discounter and nobody took much notice of him and he built it into a huge organisation,” he says.

“We’re only a small fry – we only have 10 gyms – but we’re doing extremely well. What’s that based on? Quality and price. They’re the common denominator across the board.”

As the boutique and budget gyms carve out their own niches, middle-tier players like Gym Plus – which provides both fitness and swimming facilities – are looking to appeal to families and a more mature market.

Operating across eight locations, Gym Plus has undergone significant chances over the years. It was formerly Jackie Skelly Fitness, exited the UK-controlled Énergie Fitness franchise last year, and has twice survived examinership.

Chairman Dirk van der Flier, who took control of the business with Geoff Scargill in 2015, is chasing consumers who are willing to pay a bit more for memberships but don’t want to fork out the big bucks charged by upper-end gyms.

“I came from the hotel business where it’s just totally about people. It’s all about wowing the people,” he says.

“I bring that to the gym business in the context of, the only way I can justify someone paying more than they’d pay in a budget gym is if I give a better service. I have personal trainers on the floor … The personal touch is how we’re trying to differentiate ourselves.”

Van der Flier, a former rugby player, takes inspiration from the camaraderie he felt during his sporting career.

“When I retired, I missed the training bit. I missed the community of guys I used to train with. There’s a sort of community bit that you bring to that that a gym offers,” he says.

“If you look at the trends in Europe, they talk about tribes and they talk about community. Similar to working out for your GAA match and facing the enemy at the weekend as a group together, we’ve tried to create that in the various bits of our gyms.”