PUNTERS ARE HOOKED on coffee – but there aren’t enough skilled baristas on the scene to cater for the growing demand for java.

That’s according to recruitment firm Excel Recruitment, which specialises in sourcing permanent, temporary and contract workers for the hospitality, healthcare and retail industries.

Having experienced an uptick in the number of client companies seeking qualified baristas, Excel Recruitment and its sister company, Futureproof Training, have launched a new barista training programme.

The Irish Barista School will provide eight-hour training courses at Excel’s head office near Capel Street in Dublin. The programme will be delivered by three full-time trainers with classes potentially running up to six days a week.

Shane Mclave, a director at Excel Recruitment’s hospitality division, told Fora that participants will be given a “bean-to-cup” overview of coffee theory as well as practical training on how to make various types of coffee, “from your espressos all the way to your textured milks and latte art”.

Although there are similar existing barista training courses, the Irish Barista School – which is partnered with Skillnet, the national agency responsible for the promotion of workforce learning – will give participants the opportunity to put their skills to practice in real-life situations.

“We deal with a lot of big hotel groups and contract catering companies that would have in-house barista requirements, so we would be able to help people get practical experience. It’s one thing doing it in a classroom environment, but it’s totally different when there’s a queue of people,” Mclave said.

A recent report by market research firm Euromonitor International pointed toward a boom in Ireland’s multimillion-euro coffee industry, which it partially attributed to an influx of European tech workers helping to drive up demand, especially in Dublin.

“The scene in Dublin is changing. If you look at somewhere like PwC or Vodafone’s head office in the city centre, they’ve got pretty advanced catering options. That’s as well as all the independent (coffee shops) that are opening,” Mclave said.

Karl Purdy, founder of Dublin coffee shop chain Coffeeangel, said the company is dealing with a shortage of baristas at its five outlets, which is expected to double over the coming years.

“We’re always on the lookout for good people as we grow. There’s a lot of competition,” he said. 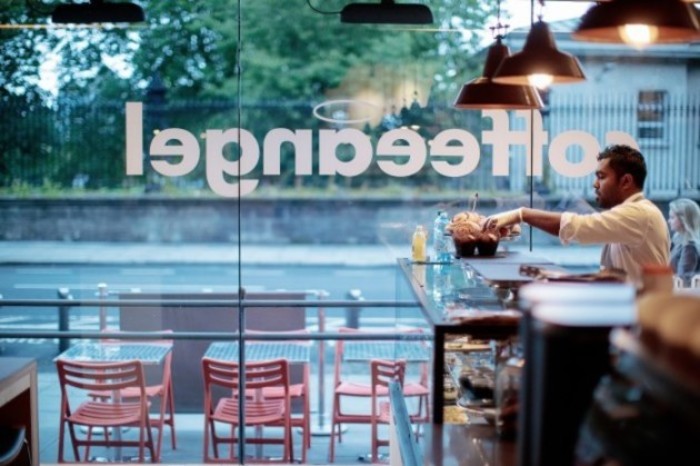 However, Purdy – who is often credited with lighting the fuse on Ireland’s specialty coffee shop boom – said the catering industry has “always been transient to a certain degree” as firms typically rely on a younger workforce.

“If we can get 12 or 18 months out of someone, I think we’ve done incredibly well. Anything less than six months is a little hard to swallow in terms of the time you require to invest in people. I think everyone is in the same boat,” he said.

Purdy welcomed the arrival of the Irish Barista School and said that Coffeeangel prioritises work experience over pure qualifications.

“Experience is what you require. That’s really only gleaned by working somewhere either in a catering or coffee shop environment … I’d rather have somebody untrained with a good attitude, lots of passion and enthusiasm than someone who knows how to steam milk and little else,” he said.